A Brace in the Sun

Just when most of us need a break from winter’s bleak chill, the Southwest offers some of the country’s hottest wild quail hunting 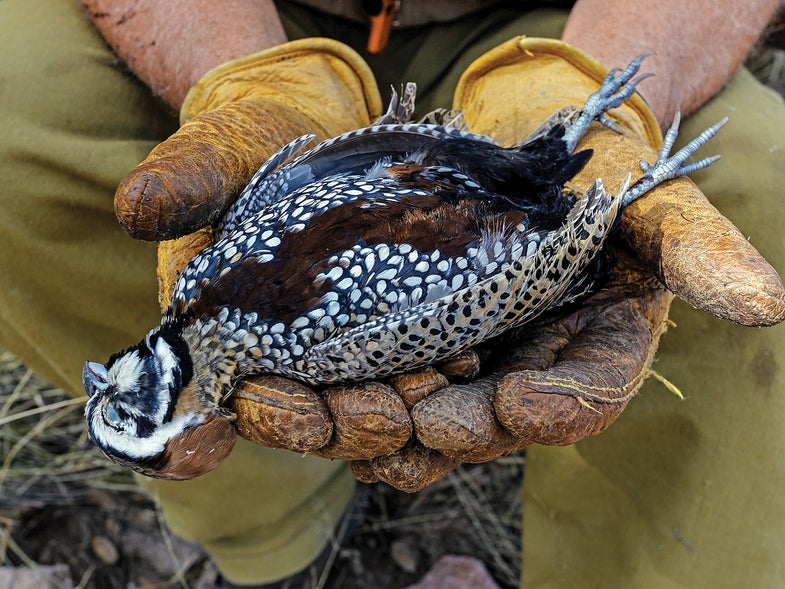 Late in the morning, the dogs freeze at the top of a draw. “Phil,” whispers Chad Smith, my host. I look over for direction, expecting a hand signal. Instead, Smith waves expansively and says, “Take it all in.”

Looking up, I can see clear to Mexico, miles of hills cut with steep valleys covered with tan nutgrass and scrubby oaks. Taller peaks form the background against a clear blue sky. Closer, I see the brace of white dogs, tails straight up like arrows shot into the ground, the setter locked on a covey of birds, the pointer backing. It’s February, zero degrees back home, and I am here, in shirtsleeves, hunting.

The covey flies up in my face as we walk in. This time I’m composed, not even breathing that hard from scrambling up a canyon wall. We each drop one from the group; the dogs pick them up, and I have my first Mearns quail.

Snowbirds flock to the Southwest now to spend the winter golfing or playing tennis. The smart ones bring dogs and guns. In wet years, southern Arizona is one of the last, best places in the U.S. to hunt wild quail. Gambel’s and scaled, or blue, quail thrive in the desert. Mearns, which we are after, live at higher elevations and are a favorite of dog men like Smith. In cactus-free covers, bunched into small coveys of four to 10 birds, Mearns quail sit tight for the point, and don’t fly far once flushed.

Smith and I admire our prizes. Mine is a pretty brown hen, but drab compared with Smith’s spectacular rooster, which shows black-and-white spotted wings and the painted face that earns it the name “Harlequin quail.”

The son of a dog man, Smith grew up hunting wild bobwhites in the South. He’s now attached to the Arizona Air Guard, and the bird hunting is better. What wild quail remain in Georgia are protected behind the gates of exclusive plantations. “When I visit home I can train my dogs on those plantations,” Smith says. “But they tell me to leave my Model 12 at home.”

Here, with more than half of the state open to public hunting, Smith can take his shotgun almost anywhere. His rig is parked somewhere in the Coronado National Forest, surrounded by steep, rough terrain. The only vehicles we’ve seen all day are U.S. Border Patrol ATVs and SUVs and the occasional heli­copter keeping watch. But we’ve found plenty of empty water bottles and backpacks abandoned by people sneaking in from Mexico. “A lot of people are afraid to hunt here because of the drug smugglers,” says Smith, “but the Border Patrol does a great job. As long as you’re here during the day you’ll be fine. I wouldn’t want to be here after dark, though.” I take note. When someone who flies Apache helicopters for a living says something is dangerous, it probably is.

After a change of dogs, we resume our hunt, up and down hills. Mearns quail tend to roost on slopes, then feed downhill during the day, according to Smith. Fresh golf ball–size holes—made by quail digging for insects—tell you birds are nearby. Between each covey there’s a lot of land, so Smith lets his dogs run big. The plan is simple: Smith follows the dogs, and I follow Smith. When the dogs find a covey, we scramble into position and kick up the birds. It’s easy to mark the singles, but Smith prefers to leave them, so as not to shoot any coveys down too far. By late afternoon we’ve found a dozen coveys, and dropped as many birds, which is excellent Mearns hunting.

At day’s end, the Fitbit clipped to my pocket says we walked 14.75 miles and climbed 213 flights of stairs, except stairs aren’t so steep, or covered with loose rock. I’ve been told a Mearns hunt can be like a backcountry elk hunt. The good news is that quail are a lot easier to pack out.

Next morning I am sore all over, but Smith has promised me an easier day in the gentler terrain of the Patagonia-­Sonoita area, a well-known destination for hunters. It’s not the hunt we had yesterday, but the walking is far less taxing.

We peck away at them. One of the dogs locks up and refuses to budge even after we have kicked the grass for minutes. Finally one bird goes, and then the rest. I shoot one. Smith shoots at a bird just as it dives to escape a hawk that’s been watching over the creek­bottom. Both Smith and the hawk miss—Smith, I think, for the first time in two days. (I don’t know about the hawk’s success rate.) The lucky quail lands in the grass and disappears.

Late in the day, we hunt a wide creekbottom where the dogs lock up and Smith and I each drop a rooster. The dogs fetch, then race off and quickly pin another covey. Smith pumps a fist. “This is Chad Smith’s favorite time of day,” he says, with the athlete’s habit of talking about himself in the third person. I dunk a fresh shell in the gun and close the action. The arid air cools fast when the sun dips, but the cold feels good, like hunting weather. This could become Phil Bourjaily’s favorite time of day. Even his favorite time of year. Maybe yours, too, at least in those years when rain falls in Mearns country.

There’s a lot of country between Mearns coveys, and the wider you can cast your dog net, the better chance you have of finding them. Chad Smith swears by his Garmin Astro 320 ($599; ­garmin.com). These GPS collars and receivers let him keep track of two or three dogs at a time (the new 430, shown, can track 20 dogs at once) when they are out of sight in heavy cover. The display shows Smith how far away each dog is, where it is, and whether it’s stopped or moving. (If a dog stopped for long, he’d say, “Belle’s on point 250 yards that way,” and we’d head over.) It comes with various topo and other mapping options, and it also stores waypoints like truck, which came in handy when we wound up in the wrong canyon one morning.—P.B.