Get Ready for Serious Woodcock Action

Be ready when the October uplands suddenly teem with timberdooles 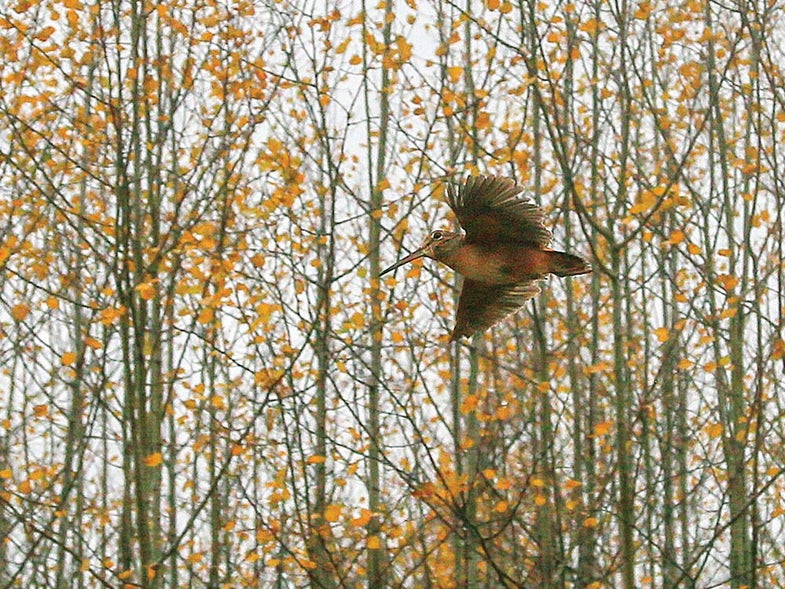 Wait for it: Let woodcock clear the thickest brush and level off. Then shoot.. Dean Pearson
SHARE

Water sloshes over the tops of my low-top hikers where the aspen thicket hugs the edge of a bog. Here and there, chalky white splashes spattered over the leaf litter remind me to stay ready. What I need are rubber boots, perhaps even the very rubber boots I packed for this trip, laid out with my gear last night, then completely forgot when I left early this morning. Five minutes into the hunt, my feet are soaked. Fortunately, mid-October weather in Wisconsin is mild.

In fact, it’s perfect. Cool, not cold. Enough leaves remain on the trees to add a little bit of fall color, though not so many that you can’t see to shoot. Geese and sandhill cranes pass overhead. All the gas stations nearby are stocked with the necessities of North Country life ahead of winter: beer, cheese, dried meats, and Packers gear. And the woodcock are in. There’s no better time to be in Wisconsin than the month of October.

My friend Rick and I are hunting with a pair of local Ruffed Grouse Society members. We know the woodcock are in from the wet white blotches on the ground. The birds trickle south in ones, twos, and threes, moving 20 to 100 miles overnight and showing up close to the same dates every year. Knowing those dates and keeping tabs on likely hotspots are the keys to catching the flight. Woodcock cover isn’t always boggy, but there’s usually water nearby. It’s rare to find fresh splashes and not run into woodcock almost immediately. Sure enough, one of the drahthaars goes on point.

Weaving through the brush to flush that first bird, I’m tangled up as the woodcock rises on trilling wings. Faced with a target that’s ricocheting off branches like a pinball while other branches grab at my arms, I know my first shot is a miss almost before I pull the trigger, and the second isn’t any improvement. Sometimes just getting a shot off at a woodcock is a victory.

No matter. When you find one woodcock, there are usually more. The trick to shooting woodcock is to take your time. Let the bird clear the canopy and level off. That’s easier to do when someone else (or a cocker spaniel) does the flushing. Even then, you need to resist the urge to mount the gun immediately and try to follow the bird as it corkscrews up. Get the gun ready, let the woodcock clear the heavy brush, then mount and shoot. As much as they startle us, woodcock aren’t fast. Their top speed is somewhere around 28 mph. Push the gun to the bird’s beak, and pull the trigger. Ignore any branches in the way. It’s surprising how often you’ll hit birds you can barely see when the gun goes off. Send the dog to look after every shot unless you know you missed, in which case, watch the bird go, mark it down, and try again. Woodcock rarely fly far.

On the next point, it’s Rick’s turn to wade in. I stand to one side, gun ready, and am rewarded with an easy overhead shot after Rick blasts two holes in the brush. A few minutes later I’m lolly­gagging along the edge of the cover on a two-track and get that rarest of opportunities: a wide open shot at a crossing bird as it cuts over the lane in front of me. Take away the brush and woodcock aren’t hard to hit. Most of their bouncing and bobbing takes place in the first few feet of flight as they struggle to clear the cover. I focus on the long bill and send the bird tumbling.

The bird is a female—noticeably larger than the males—and larded with fat for the migration. I admire it, then tuck the bird into my vest and reload. I may be wearing the wrong shoes, but my gun fits right in here. A 20-gauge Caesar Guerini Woodlander, it’s slightly fancier and a lot less battered than the Beretta 686 and SKB 20-gauge o/u’s of our local hosts and the Franchi double, also a 20, belonging to Rick. Mine has Skeet and IC tubes in the muzzles, as shots at woodcock are rarely long.

Our 20s make the most practical choice in terms of weight, payload, ammo availability, and price, but wood­cock are small, delicate birds that are typically shot at close range and will fall readily to a 28-gauge, too, or even a .410 if you pick your shots. Featherlight guns—those sub-6-pound wands that seem like ideal upland guns until you try to hit a grouse or pheasant with them—actually do make sense for woodcock. While fighting brush, you often have to carry your gun one-handed, and most shots are close and going away. You’ll point your gun much more often than you’ll swing it, so you don’t need as much gun weight as you do with birds that present ­longer, crossing shots.

RELATED: Shooting Lessons from a Limit of Woodcock

The last point of the day comes in a stand of evergreens on higher dry ground, although I’m still aware of the squish-squish-squish of my socks as I walk in. The bird rises, bobbing, and like all good shots at woodcock, this one benefits from a total lack of conscious thought. Rather than trying to glue the bead to the bobbing bird and aim the shot, I let my eyes and hands do the work, and I have my limit.

Three woodcock will be delicious split up the back and grilled rare, but I won’t get around to cooking these birds until I get home. Right now I could go for some dry socks, then maybe a celebratory beer and some fried cheese curds. I am in Wisconsin, after all.

GEAR TIP: Return of the X-Land’r

The original Final Approach X‑Land’r layout blind was one of my favorites. Light and very low profile, it disappeared anywhere; setup was a simple matter of unfolding the blind, and it was also a backpack for silhouette decoys or rags. Not content with success, Final Approach made the blind flimsier and cheaper and called it the X-2. Apparently enough hunters felt the way I did, and FA listened. The Original X-Land’r ($279 and up; fabrand.com) is back with improved, coated fabrics, stronger hardware, and a lifetime warranty, in Mossy Oak Blades, Max-5, and field brown. This is good news.