California trout may soon be in hot water, both literally and figuratively, according to a new report. A team of... 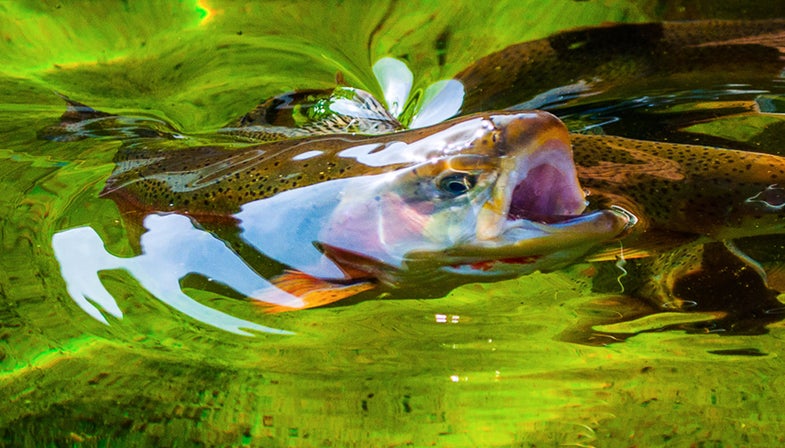 California trout may soon be in hot water, both literally and figuratively, according to a new report. A team of researchers at the University of California, Davis, predict that 23 of California’s 31 genetically distinct salmonids could disappear within the next 100 years, with 14 species vanishing in the next 50 years, if steps are not taken to restore their habitat and limit the effects of climate change.

The report, which is a follow-up to a 2008 study and was commissioned by California Trout, found that degraded habitat and warming water, attributed to climate change, pose serious threats to cold-water fish populations in California. Drought—also a likely side effect of global warming—as well as crop irrigation and the construction of dams and levees, has contributed to the loss of habitat and reduced spawning populations within the subspecies.

In the wake of a five-year drought, the salmon populations experienced a heavy strain from streams across California drying up due to a lack of rainfall and agricultural demands. In Northern California, marijuana operations, now legal in the state, have further burdened local water supplies. Efforts are being made to combat the effects of the droughts, such as by dropping walnut stumps and root bundles into rivers, providing a place for the fish to hide from predators. There is also a push for a test program to be put into place, in which rice fields in the Sacramento Valley would be used to raise and feed baby salmonids.

Per kcra.com, Robert Lusardi, also a University of California, Davis, researcher and a co-author of the study, said diversity has traditionally helped these fish species endure changes to their environment, but pointed out that such diversity is becoming increasingly limited. “They’ve been around for at least 50 million years,” Lusardi said. “The reason they’ve always been able to persist is because of that inherent diversity that they have within their populations, and we just don’t have that diversity anymore.”

Additionally, Lusardi said that dams, and other aquatic infrastructure, that block anadromous salmonids from reaching their traditional spawning grounds have contributed to lower numbers of reproducing fish, compounding the problems facing the subspecies. “In general, migratory salmonids have been cut off from 99 percent of their historical spawning habitat throughout the Central Valley and 95 percent of historical floodplain habitat (now blocked by levees)—which these fish historically used for rearing prior to migrating to the ocean,” Lusardi said.

Chinook salmon, which are critically endangered, have shown dismal spawning numbers in the Central Valley region of California in recent years. It’s estimated that the spawning numbers of Chinook have dropped to a record low, from 3,500 individuals in 2015 to just a few thousand in 2016. Prior to the dams’ construction, the region had an estimated run of 500,000 Chinook.

In light of the findings, Curtis Knight, the executive director of California Trout, said immediate action is required to preserve California’s native salmonids. “If we don’t act, we face losing our native salmon, steelhead, and trout species,” Knight said. “This would be tragic, not just because we would lose these iconic species, their beauty, their mystery, but as importantly, we would lose what they signify—cold, clean water, healthy rivers, a better California.”