A Case for Pushing Yourself in the Wild

The farther you go, the harsher the conditions—that’s when you learn the most about yourself 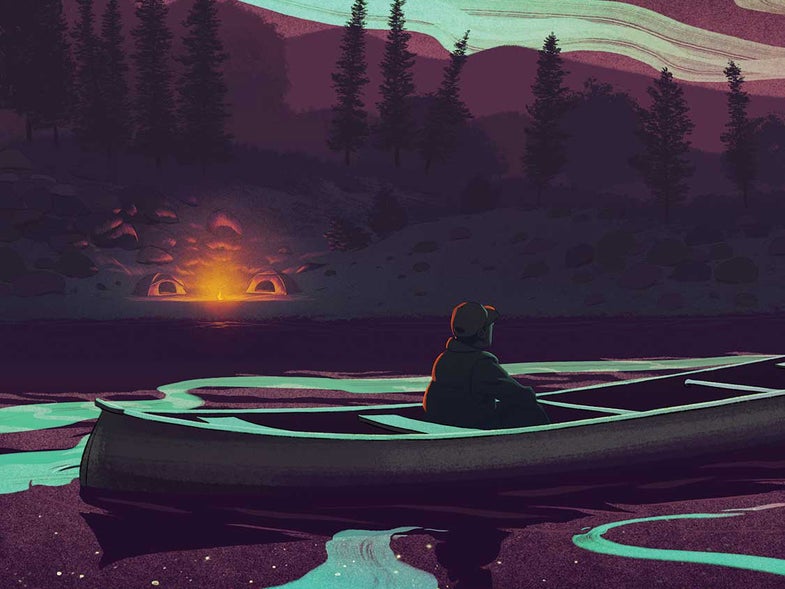 I’ve definitely come closer to dying in the woods, and passing a kidney stone hurt a lot worse. But I’ve not had a tougher day in wilderness.

We were halfway into an eight-day unguided paddle trip through Wabakimi Provincial Park in northern Ontario, a massive 2.3-million-acre swath of boreal forest, river, and lake ribbed with soaring ridges of Canadian Shield granite. We’d hopped a train that dumped us out at a river trestle where an old Hudson Bay Co. trading post moldered in the woods. With our first paddle stroke we were in total wilderness. We had a rough itinerary to make it to a floatplane pickup, a schedule that hinged on one single, monstrous mid-trip day—more than 20 miles of paddling, three portages around thunderous falls, and a first-ever stint at sailing the canoes across a miles-wide lake.

It was just as rough as we had feared: We broke camp at dawn and portaged the last waterfall at 7 p.m. with miles still to travel. Our last rapid was a 300-yard-long gauntlet of ledge drops and garish hydraulics. Halfway through, my buddy Scott Wood slumped over in a hypoglycemic bonk. I paddled the lower rapid solo from the bow, taking rollers in the chest, and Wood and I limped to shore, the canoe half-filled with water. At about a quarter to midnight we threw up the tent in a fire-blackened scrub, delirious with fatigue.

One of the best days of my life.

Jim Harrison put it most pointedly, in words that cut quick and deep. “The danger of civilization, of course,” he wrote in The Beast That God Forgot to Invent, “is that you will piss away your life on nonsense.”

Lately, I’ve been thinking about where the nonsense is in my life. Like everyone else, there’s plenty of busyness: work, raising kids, trying to volunteer, being an awesome husband. The pace and sheer volume of effort it takes to do just a passable job at all of those things can get out of hand, but none of that is nonsense. Still, I wonder if there are certain trivialities—professional competition, fast food, social media, a winter beer gut—that I’ve allowed to take hold of little pieces of my spirit, like corrosion on a pipe joint, rendering all of my plumbing a little less efficient, a little more prone to breakdown.

In the Wabakimi the next morning, Wood and I crawled out of the tent on hands and knees, backs creaking like old wire, and gazed out on the largest berry patch I’d ever seen. Rising from the ashes of a massive lightning-strike burn, lowbush blueberries sprawled for a thousand yards. We wallowed on our backs like bears, gorging ourselves on blistered double handfuls of fruit. Rejuvenated, we launched the boats, paddled a few hundred yards, and landed the biggest pike on a fly either of us had ever caught. We paddled on and on, northward ever, as the ash gave way to forest and the forest to sprawling lake, edged with soaring cliffs where pictographs of caribou and suns have gazed over wild water for ages.

None of which was nonsense. It felt a little crazy, but no moment seemed inconsequential. When I look at the photos of that big pike and those giant falls and the boggy trails where we sunk to the thighs with the canoes on our shoulders—in fact, when I think of other remote wilderness trips, from Alaska to Labrador to the Outer Banks—what I most remember isn’t the pristine beauty or the smell of an 8-pound brook trout or arrowed ptarmigan charring on a wood fire. It’s a gratifying sense of self­-sufficiency. The knowledge that I did that. I got there. I came home safely. At the time, in that place, I had what it took. And those thoughts are always followed by another: I will do it again. For the fish and the game and the camaraderie, but for more.

On our last night in Wabakimi, I slipped away from camp and pushed a canoe into the river. As I drifted quietly in a dark lagoon, northern lights shimmered in the sky, mirrored on the water. I stretched out in the bottom of the canoe, my stomach bulging with pike and walleye we’d caught at dusk. A loon cried. I lay in the bottom of the canoe, and drank in the magnitude of the nothingness—and the everythingness—that spread in each direction.

The campfire was still burning when I walked back to the tents. Wood had the maps out, poring over the next day’s route to the lake where a floatplane would pluck us from wilderness like a hunting osprey. The return to civilization would be swift. In two hours we’d go from paddling a remote river to hauling gear from the plane to the trucks.

I would be back home in less than a day, and everything would be there where I left it—work and family and bucket lists and to-do lists. No rapids to run, but no time to drop my guard, either. The challenge of wild country would be behind me, at least for a while. But the hard work of honoring its hold on the spirit never ends.

GEAR TIP: Light It Up

Gear Aid’s new rechargeable light and power-pack modules bring monstrous, packable, portable light to remote regions, so you can clean fish by the dark creek or tie flies on a tailgate. The Arc LED Light & Power Station ($100 from Gear Aid) blasts 60 LEDs for up to 96 hours of illumination and will recharge a smartphone five times.