Do You Cast a Baitcaster Farther Left Handed or Right?

Use these distance casting techniques no matter your reel preference. 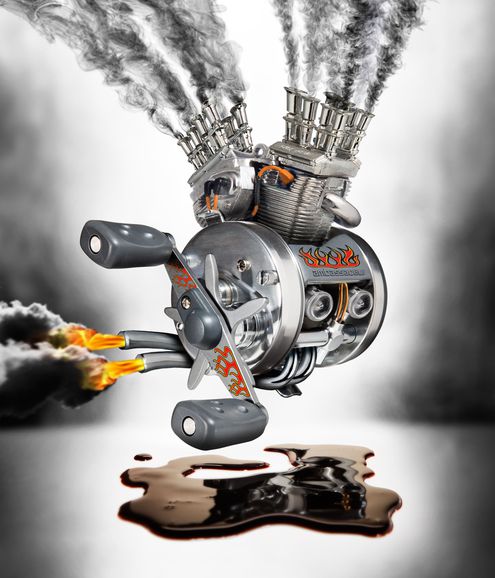 Use these baitcaster distance casting techniques to get your lures closer to fish. Gorman & Gorman
SHARE

Here’s a question for you baitcasting-reel fans: right-handed or left-handed?

Most such reels traditionally have the handle on the right side. That means a right-handed caster will make a cast and then switch the rod to the left hand so the reel can be cranked with the right hand. That sounds cumbersome, but long-time baitcasters know that it’s quick and simple once you get used to it.

But now there are increasing numbers of new reels available as left-handed versions, meaning the reel handle is on the left side (as the reel faces forward). The Shimano reel shown in the photo is a lefty, for example.

In that case, a right-handed caster casts with his right hand (or both hands with the right hand dominant) and reels with his left. This is not the traditional approach, but it might make more sense. There’s no need to switch hands after a cast is made. Contact with the lure is never lost, and if a fish hits just as the lure lands there’s no delay in hook-setting.

I admit the logic, but have trouble in the application. I first learned to baitcast more then 50 years ago when left-handed reels were, as far as I know, unheard of. So I’ve spent decades casting right-handed and then switching the rod so I could reel right-handed also.

Of course back then most freshwater baitcasters didn’t have an anti-reverse, there was no free-spool, and no star-drag either. Yes-siree, back when men were men. Take that, you whippersnappers.

But seriously, I’ve tried left-handed baitcasters recently and haven’t stuck with them. Despite all common sense, it just seemed too awkward on the water. But maybe I should put more effort into making it work.

Has there ever been a fisherman who didn’t want to cast farther at one time or another? Even though short, accurate casts catch fish most of the time, dreams of distance are usually dreams of larger fish that can’t quite be reached with ordinary casting. Shore-bound trout anglers want to toss their spinning lures ever farther toward the middle of a trout pond, and bass anglers want to get that Zara Spook an extra 20 yards to cover more water more efficiently.

The following tips will help you achieve greater casting distance. To cast 20 or 30 percent farther than you are now, use most of these suggestions in combination.

Tune Your Baitcaster Reel for Distance

Distance casting starts with tuning your tackle for top performance. Clean the factory grease from your baitcasting reel, replace it with light oil (except for the gears, which need light grease), and pay special attention to the ball bearings on which the spool revolves. Those should be cleaned in solvent, allowed to dry, then lubricated with no more than two small drops of low-­viscosity oil. The freely spinning line spool will now require more thumb-control finesse but will also cast a lot farther.

For spinning reels, thin lines cast farther than thicker ones because there’s less friction as the thinner line peels off the spool. So respool with the smallest-diameter line that’s still strong enough for the fish you target: say, a thin superline, such as 10-pound-test FireLine, on a midweight spinning reel. You can also overfill the spool slightly, adding line right up to the edge of the spool rim. That increases the possibility of line tangles if you aren’t careful, but it adds distance.

A longer rod will help, too. Instead of using a 6-foot baitcaster or spinning rod, try one of 7 feet or more. As longer, fast-action rods move through a casting arc, they generate more rod-tip speed—​­making your lures fly faster and farther.

If you start snapping off lures with more power­ful casts, consider a shock leader. With medium to heavy tackle, use an Albright knot to splice a stout monofilament shock leader that’s a few feet longer than the rod to the lighter main line. This leader absorbs the initial increased force of distance casts, while permitting the lowered friction of a thin main line as the lure travels.

Go the Distance with the Right Casting Technique

Basic technique in casting for distance is easy. Instead of the short-stroke snap cast that most anglers employ to toss a lure 50 or 60 feet, reach back farther with the rod. Use both arms and shoulders to put some muscle in the forward stroke, and use your left hand (if you’re right-handed) to pull the rod butt sharply toward your body as your right hand pushes the rod forward. This bends the rod more deeply and moves the lure faster.

Finish with an abrupt stop to transfer maximum energy to the lure as it departs the rod tip. Many anglers make an indefinite forward swipe when casting, with no defined end to the stroke. This just kills a cast. Start thinking Hard stop! to radically improve your distance.

Lengthening your overhang—the distance between the rod tip and the lure at the start of the cast—can also add distance to a cast. A normal overhang is usually about 4 to 8 inches. Try letting the lure hang down about 2 feet instead. During the cast, the lure will travel through a longer casting arc at greater speed.

Now that you’re casting farther, I’ll add a final caution: Many people get so preoccupied with long casts that they forget about fishing. Yes, casting for distance is important sometimes—but not always more important than those fish that are only 20 feet in front of you.