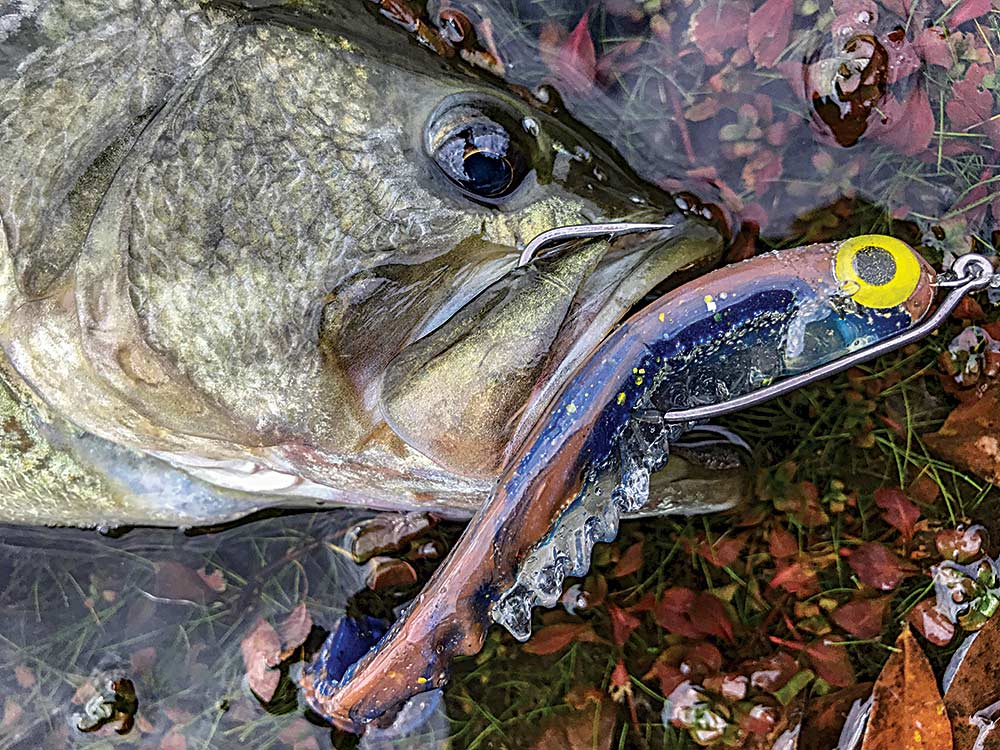 Brad Hardy’s garage is tiny. I can barely picture a Dodge Neon fitting inside, even if you stripped away the movable shelving, folding tables, and mountain of 5-gallon buckets. In the Pennsylvania winter, it’s freezing in here, so Hardy fires up a small electric heater and layers in sweats to work. He started to hand pour soft-­plastic baits at 16 for fun. Sixteen years later, it’s a job.

In this humble workspace, he is surrounded by rubber molds, most featuring impressions of baits he designed himself. A dorm-room-size microwave covered in stickers melts every measuring cup of plastic he needs to fill those molds so he can fill his orders. There are powders and paints stacked in boxes and on racks. Respirators and drying baits clog the work­tables. It’s tight, but it’s Hardy’s happy place. He spends 10 to 14 hours a day here, tinkering away to produce lures in patterns and with actions that aren’t easily attainable to the big-name companies that injection-mold thousands of baits a year with heavy machinery. Luckily for Hardy and the rest of his ilk grinding it out in basements and small shops, there is a huge cult of anglers in this country convinced that hand pours outfish all other soft plastics, and once you understand their perks, you might become its next member. Hand to Mouth

Anything handmade comes with a trade-off. You usually pay more for it, but in many cases, you can also have it built to your exact specifications. Hardy, who pours for Michigan-based Stankx Bait Company as well as his own brand, Oracle Lures (oraclelures.com), gets the most satisfaction out of customers who push his creativity. That freedom to innovate is one reason Hardy believes anglers get a true advantage when they buy from smaller hand-pour operations instead of grabbing the same old stuff off the shelf at Walmart. “You can’t exactly expect to get Gary Yamamoto on the phone,” Hardy says. “You can’t just call your boys at Zoom and say, ‘Hey, I have an idea’ that they’ll listen to, let alone facilitate the creation of. But I answer those calls. I don’t think I’m the exception in saying that anyone who makes custom lures is going to be honored to make you your dream bait.”

Hardy has played with everything from near-microscopic metal­lic beads to gold leaf to metal chips to enhance the already unique color patterns he achieves through a mix of swirling, layering, and hand painting. Custom colors, however, are relatively simple to create. Densities to alter sink rate, as well as the overall hardness or softness of a bait, can be tailored fairly easily too. The bigger challenge—the one Hardy enjoys most—is crafting a new bait. If you believe you’ve dreamed up the perfect craw for your river, or want a drop-shot minnow with a certain tail you just can’t find, Hardy can start with a simple lump of clay and ultimately turn your vision into the ringer nobody else has on your home water. There’s just one catch: Hardy has to believe in your vision as much as you do. He wants to work together with the angler in every step of the process, so you can’t simply send a payment through PayPal with some vague notes on a bait that doesn’t exist and then sit back and wait for the mailman. Hardy may be picky and choosy about which custom projects he takes on; however, if he takes on yours, you can expect to pay a reasonable $100 or less for the design fee, and then $6 to $25 per bag depending on the size and color complexity of the baits.

If hand-pour companies were rock bands, Kentucky-based Jenko Fishing (jenkofishing.com) would be the Rolling Stones. Started in 2016 by then 17-year-old Coleton Jennings, Jenko is one of the few producers of hand-poured swimbaits that you can find on big-box shelves. To achieve that, Jennings had to sacrifice the custom-order capability of smaller brands. But by outsourcing to China with an American on location to manage quality control, he’s made hand pours more ­affordable—a blessing to those anglers who swear they have better action and catch more fish.

“Companies that make injection-molded baits tend to use the same plastic for everything they offer, so their worms are made from the plastic they’re using for swimbaits,” Jennings explains. “With hand pouring, you can use very specific blends of plastic for each bait. I’ve been a big fan of hand-poured swimbaits for a long time. Years ago, these baits were often pretty stiff, but the quality of the plastics has improved a lot. We spent a whole year getting our mix just right so we could create a very soft but very durable bait. The tail action you get in a hand-poured swimbait will always be better than that of an ­injection-molded bait because of that softness.”

Jenko’s top seller is its Booty Shaker, a wide-profile baitfish imitation with a paddle tail. The largest model measures 8 inches. What Jennings is more excited about is the new 31⁄4-inch model, which he claims is the smallest mass-produced hand-poured swimbait on the market. Its size allows it to be incorporated into Alabama rigs, which he says hasn’t been done with hand pours before.

Jennings’ goal is to push the envelope with the method, particularly in the color arena. Hand pouring already allows for layering and other effects that injection molding cannot replicate, but he says Jenko will be going a step further in the near future, introducing a variety of true-to-life baitfish patterns that will really “match the hatch.” This realism may have already been attained in other lure categories, but Jennings promises it will be a huge leap for hand pours, nudging the gap between modern technology and handmade performance a bit closer.

Trout gobble nymphs in the frigid water of early spring. The question is, are you fast enough to register their super-subtle takes and strike on time? Rio’s Kahuna LT strike indicators will make your draw quicker. These practically weightless pieces of high-floating fly line can be cut to any length and are designed to slip over your leader. They won’t impede casting or drift in the slightest, and they’ll tip you off to the softest bumps and stops instantly.