To catch picky warm-weather bass, you’ll have to lure them in with a mega worm 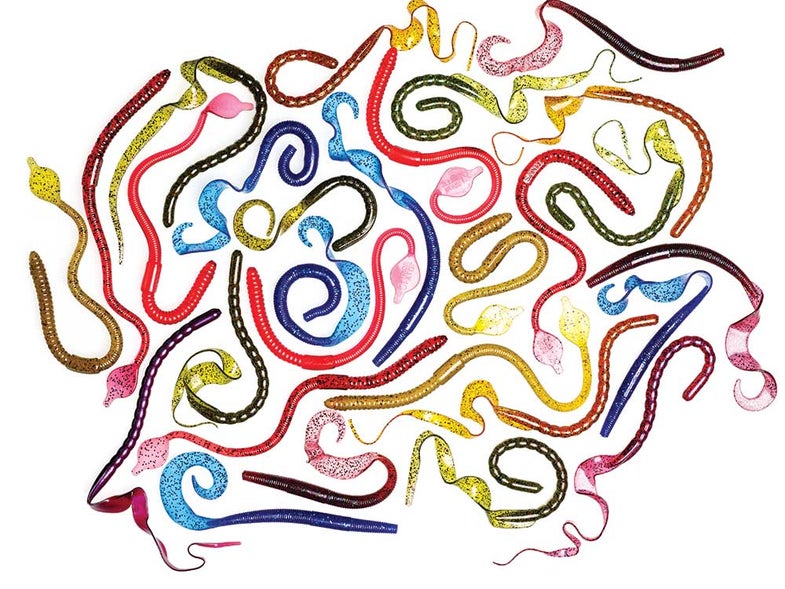 Come summer, Alabama bass pro Russ Lane goes big. “I catch more and bigger bass by supersizing my plastic worms in hot water,” he says. “The body temperature of the bass is always the same as the lake temperature, and once lake water hits the mid 80s to low 90s, the fish’s metabolism is cranking in high gear and it’ll gulp the biggest prey it can find.” Just how big does Lane go? At least 10 inches…and up to 14.

Rig a mega worm according to water visibility.

In low-visibility conditions, Lane targets isolated submerged stumps, logs, and weed patches with a Texas-rigged worm—one in a dark color with an oversize ribbon or paddle tail that emits maximum vibrations. “I’ll peg the sinker with a toothpick to prevent it from sliding up the line,” he says. “This keeps the sinker tucked up tight against the worm’s head, which lets me detect light bites more easily in heavy cover.” Lane casts a few feet past his target, then hops it along the bottom, using the rod to steer it into the cover where a bass is holding. “The instant I detect a tap, I’ll lower the rod tip, reel up slack, then hammer the fish with a hard upward hookset.”

In clear highland lakes, bass often lurk offshore on deep points and ledges during summer. Here, Lane drags a big worm on a Carolina rig so he can cover large pieces of deep structure quickly. He casts the rig, lets the sinker hit bottom, then drags it along with slow sideways rod sweeps, pausing to reel up any slack. “Visibility is usually good in these lakes, so I’ll use a long, slender, translucent metalflake worm with a ribbon tail,” he says. “As the heavy sinker bumps along the irregular bottom, the worm trailing behind it floats up and settles back down enticingly. When I detect resistance, I’ll quickly reel up slack line, then set the hook low and to the side.”