Change Your Range is a fast-growing volunteer group dedicated to cleaning up the junk recreational shooters leave behind on public land. And you can get involved 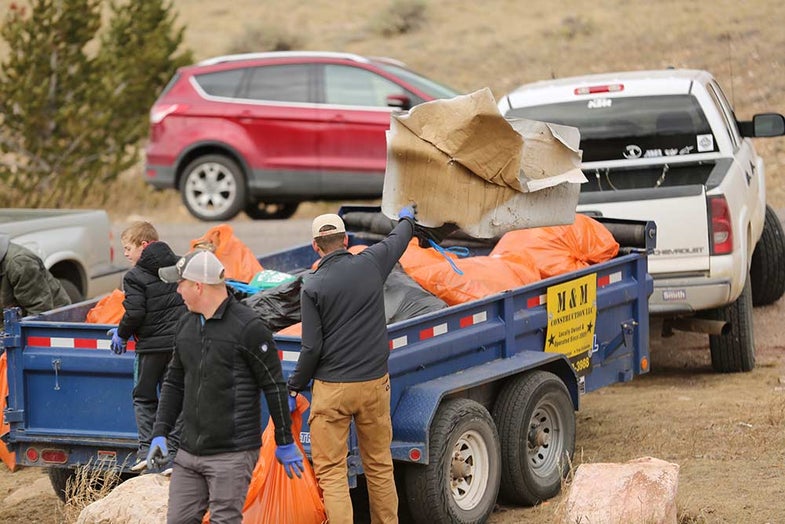 Back when I was just a toddler in the writing game, I wrote a story for High Country News about a ban on plinking and shooting on more than 81,000 acres of the Tonto National Forest near Phoenix. It was a story close to my heart then, because I was living in the Bitterroot Valley of Montana, and there were 440 acres of state land only a couple of miles away where my friends and I shot for fun several times a month. The place was called the Soft Rock and there was a wide coulee with a towering dirt face for a safe backstop, and a metal plate, 200 yards out, that somebody had wired into the sagebrush, and an old metal gatepost (the gate and fence were long gone) out at about 150 yards. As we were getting ready to leave, putting pistols up, casing rifles, gathering brass and shotgun hulls from the weeds, invariably someone would say, “Have you rung the bell?” Then one of us would jam his earplugs back in and take an offhand shot at that old gatepost, and wait for the ping! It was a happy ritual.

And I knew then, in 2001, when I wrote that story about the Tonto, that the good times for us on the Soft Rock were numbered. As the population of the Bitterroot Valley grew, other people were finding the Soft Rock. The land there had never been respected; the dumping had been out of hand for as long as I had been going there, and the recreational shooting was making it much, much worse. There were refrigerators, old computers, a washing machine, even a stolen car—everything shot to pieces and just left there. People started bringing skeet throwers to the coulee, and the ground was carpeted with orange fragments of clay pigeons and spent shotgun shells. It took longer than I thought it would, but the Department of State Lands eventually did exactly what they had to do: ban shooting there and start cleaning the place up.

There was nowhere else like the Soft Rock for shooting in the valley; open country was becoming hard to find amidst all of the development. We’d all lost the best place we had to a combination of increasing numbers of people and some of the most irresponsible shooting, partying, and off-roading behavior (sometimes the three were all mixed together, of course) I’ve ever had to witness.

James Christiansen has his own stories of public-lands shooting places lost to trash, disrespect, and hooliganism, and he is doing something about it. Christiansen is the Chief Operations Officer of Gunwerks, Inc., a company based in Cody, Wyoming, that specializes in long-range hunting and shooting rifles and associated equipment and training. He is also the tip of the spear of a growing movement called Change Your Range, dedicated to bringing shooters together to clean up the informal public-land ranges, like the one my friends and I lost on Soft Rock, and to teach shooters the kind of manners and etiquette without which the future of public-lands shooting is very dim indeed.

“Long-range hunting and shooting depends on access to public lands,” Christiansen told me. “We started Change your Range because what we were seeing was going to get them closed. I grew up shooting long range in Utah, and we had a spot on the west side of Utah Lake where people were just incredibly irresponsible. You couldn’t believe it. They were shooting the petroglyphs on the rocks, shooting trees, bullets flying where people were shooting with no backstops at all. We lost that spot.”

So it was only natural that Christiansen would eventually target another shooting area on the west side of Utah Lake for cleanup through the Change Your Range program. When 278 volunteers showed up and worked all day despite bad weather, the real potential of Change Your Range started to become clear.

Christiansen said the first big cleanup organized by Change Your Range was at Rogers Canyon, outside of Laramie, Wyoming, on November 4, 2017. (If you want to know how Rogers Canyon was chosen as the starting place, just look at this photo and press release from 2014.) Six flatbed trailers worth of junk was removed. It was only natural, given Christiansen’s knowledge of what had happened to their shooting areas on the west side of Utah Lake, to target that area for cleanup next. In May of 2018, volunteers with Change Your Range, working with land managers from the Bureau of Land Management, spent a day removing tons of debris from public lands near Enoch Canyon, south of Saratoga Springs. Volunteers got lunch provided by a local barbecue restaurant, gear, and a chance to shoot with the experts from Gunwerks, Inc. Most recently, on September 29, 2018, Change Your Range held a cleanup in the Red Cliffs area of the Custer-Gallatin National Forest south of Bozeman, Montana. Many more are planned.

According to Cody Yeatts, of the U.S. Forest Service, the recent Red Cliffs cleanup was a perfect example of public-lands users taking responsibility for their own lands. “We have a lot of user groups that focus on helping us with trails and things like that, but this is the first time that shooters have organized an event like this, and it worked out so well,” Yeatts said. “We had 40 or more people come, cleaning up everything from brass to appliances and just garbage.” Yeatts added that target shooting had always been popular on the public lands there, but that it was increasing. “We are seeing more and more trash left behind, but events like this can change that—and it can change pretty fast—because people get educated, they learn that that they have to take care of it if we want to keep it open.”

For Christiansen, the growing popularity of Change Your Range comes at no surprise, given the critical importance of these public lands to the future of hunting and shooting. “I grew up long range shooting on public land, just a math guy who was intrigued by the idea that you could take a tiny projectile and deliver it into a small target from far away,” he said. “I had the opportunity to practice that, and I want to make sure that keeps going. We are doing the cleanups on the ground, and we are trying to educate people, too, with our videos and outreach, about things like rock art and about what is expected of us.”

Would he have any advice for public-lands shooters—that is, other than to join him at Change Your Range?

“Well, I think it is time for all public-lands shooters to grow a pair and start telling others that we all need to take responsibility for what we are doing.”

The next event is planned for BLM lands along the Table Mesa area near Phoenix, Arizona. Which kind of brings me full circle to where I started with my story in 2001. Maybe, if Change Your Range becomes a national phenomenon, I’ll never have to write another story about public-lands managers closing vast areas to recreational shooting. Help them if you can.