Chui: In Praise of the Leopard

The leopard is incredibly strong, highly adaptable, and the most formidable of the felines 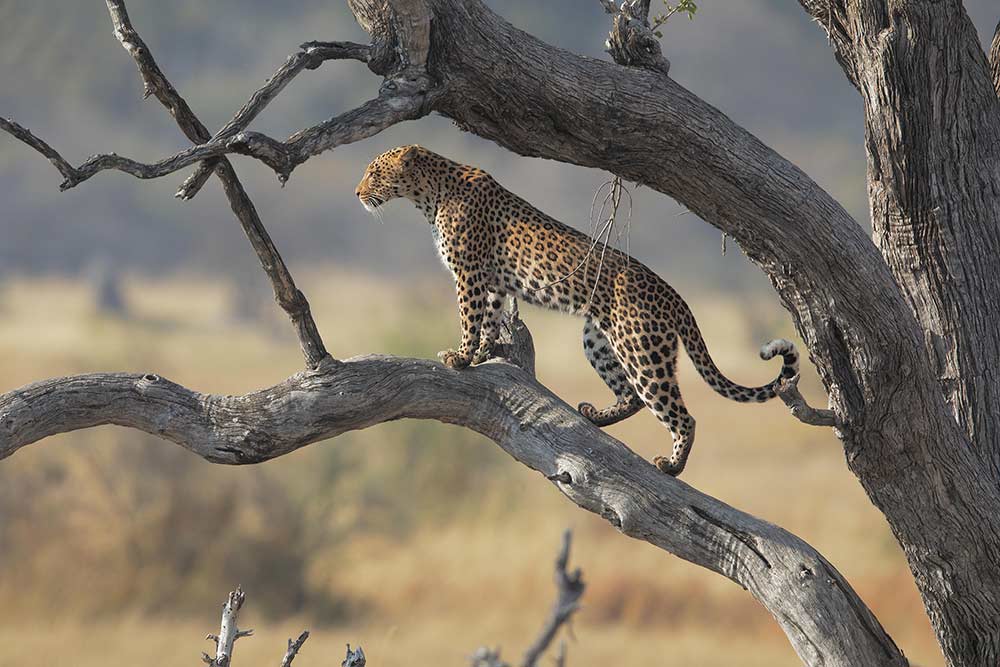 The most appropriate animal name in Africa belongs to the leopard, which is called chui in Kiswahili, the trade language of East Africa.

Pound for pound, the leopard is the most formidable feline. It’s the most adaptable of the big cats, and once upon a time it lived throughout Africa, in Europe, and much of Asia. Unlike lions, leopards are able to live in close proximity to humans because they’re solitary creatures who love heavy cover, and who operate mainly in darkness. If your step-on dog disappears when you let her out at night to pee, she will most likely be reincarnated as a leopard turd.

Leopards are not big. A good-size male will scale 130 pounds; 150 is very big; 170 is a monster. But they are perfect prodigies physically. A leopard can sprint at 35 mph, jump 9 feet straight in the air, and leap 30 feet straight ahead. The professional hunter Alexander Lake, who ranged all over subequatorial Africa in the first half of the 20th century wrote of the leopard:

“His strength is fantastic. He can hang an antelope three times his own weight twenty feet up in a tree. I once watched a 100-pound leopard disembowel a sassaby antelope, drag the 240-pound carcass 300 yards, lug it up 15 feet into a wild fig tree and hang it by the neck from a crotch.”

Leopards eat practically anything, but have a particular fondness for young baboons. They like nothing better than creeping into a troop of sleeping baboons and grabbing a nice tender one. Baboons are absolutely petrified of chui, and go bonkers when a leopard is around. One evening in Zimbabwe, not far from Victoria Falls, I heard this happen. I’ve never listened to a din like that in my life.

Leopards are hard on professional hunters. I’ve probably met half a dozen PHs who were grabbed by a wounded leopard while following it up. Chui can conceal himself where you would never think it possible and will land on you in a single leap before you can bring your gun to bear. Despite this, I don’t know of any PH who was killed by a leopard. This is because, like all of the big cats, they learn how to kill from Momma, and if Mom has never taught them how to deal with a human, they’re at a loss for what to do. In the days before antibiotics, a leopard mauling was often fatal, not because of what the cat did, but from the infection that inevitably followed.

Among PHs, there is some debate about the best gun for following up a wounded leopard. One school favors a heavy rifle while the other prefers a 12-bore shotgun loaded with what the British call LG (for “large grape,” after grapeshot) which is about the equivalent of 000 buck. More important is someone with a gun or a spear and a cool enough head to peel the leopard off while not killing you in the process.

If left alone, in Africa at least, leopards rarely attack humans, but in India they have made excellent careers of the practice. The most proficient maneater was the Leopard of Panar, a big male that operated in the early 20th century in remote northern India, and is alleged to have killed and eaten over 400 people before he was hunted down and killed by Jim Corbett. Corbett considered leopards far more dangerous than tigers, and saw trained hunting elephants, which would take a tiger charge in stride, panic and run from a leopard attack.

The peak human-eating years in India were 1875 to 1912, and the total number consumed was nearly 12,000. Hardly any female leopards become man eaters, and you can draw whatever conclusions from this you wish. Attacks, by the way, are still common.

Formidable though it is, the leopard has natural enemies. If a leopard kills something it can’t eat immediately, the cat will haul it up in a tree. If the carcass stays on the ground, hyenas and lions and Cape hunting dogs will take it away and try to kill the leopard in the process. If a baboon troop catches a leopard in their midst, the big males will tear it to pieces.

But one on one, pound for pound, there’s nothing in the animal kingdom that can take on a leopard of the same size and come out ahead.