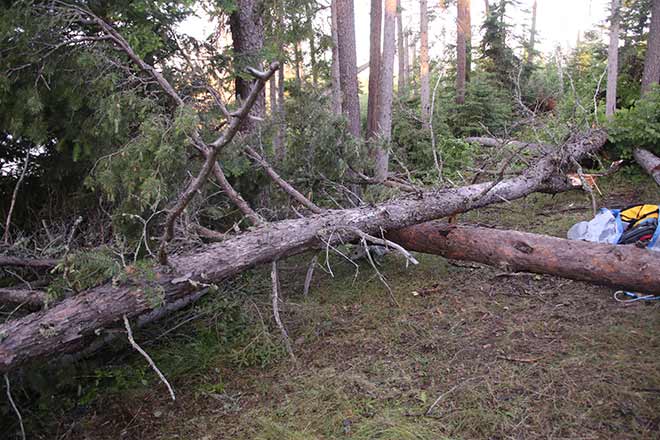 Take The Fall: Two trees crashed down on Lundberg during an intense thunderstorm.. fallen trees
SHARE

The clouds came out of nowhere. After three days of paddling and fishing, my five friends and I were relaxing near our campsite when we spotted the storm in the distance. We turned on our weather radio and confirmed that severe weather was headed our way.

We decided to play it safe by building a makeshift shelter. We strung a tarp over a partially fallen tree and staked it down. But just as we hunkered inside, 75-mph winds suddenly ripped through the woods, pulling the stakes out of the earth. I was already freaked out when I heard a loud cracking noise. I looked up to see a tree crashing down right toward me. I tried to stop it, but the tree landed right on my leg, pinning me to the ground. Seconds later, before the pain could even register, a second tree fell on me. It hit me in the ribs but somehow knocked the first tree off of me. That’s when I felt the pain. I had a punctured lung, and my leg and six ribs were broken. All I could think about was my 18-month-old son.

When the trees started to fall, my friends had run to an open area, unwittingly leaving me behind. But they quickly realized I wasn’t with them and came back for me. I was in pretty bad shape, and it looked as though more storms were headed our way. My pals John and Lane knew I needed help, so they grabbed a canoe and started paddling across the lake toward the closest ranger station, two hours away. Meanwhile, the rest of us huddled together in a tent and tried to stay warm.

Just after midnight, John and Lane returned with rescuers. They strapped me onto a backboard, loaded me into a canoe, and paddled me to the ranger station, where an ambulance was waiting. We made some good decisions that day, by working together, but we should have stayed away from the trees. That’s a mistake you don’t make twice. —As told to Joe Albert