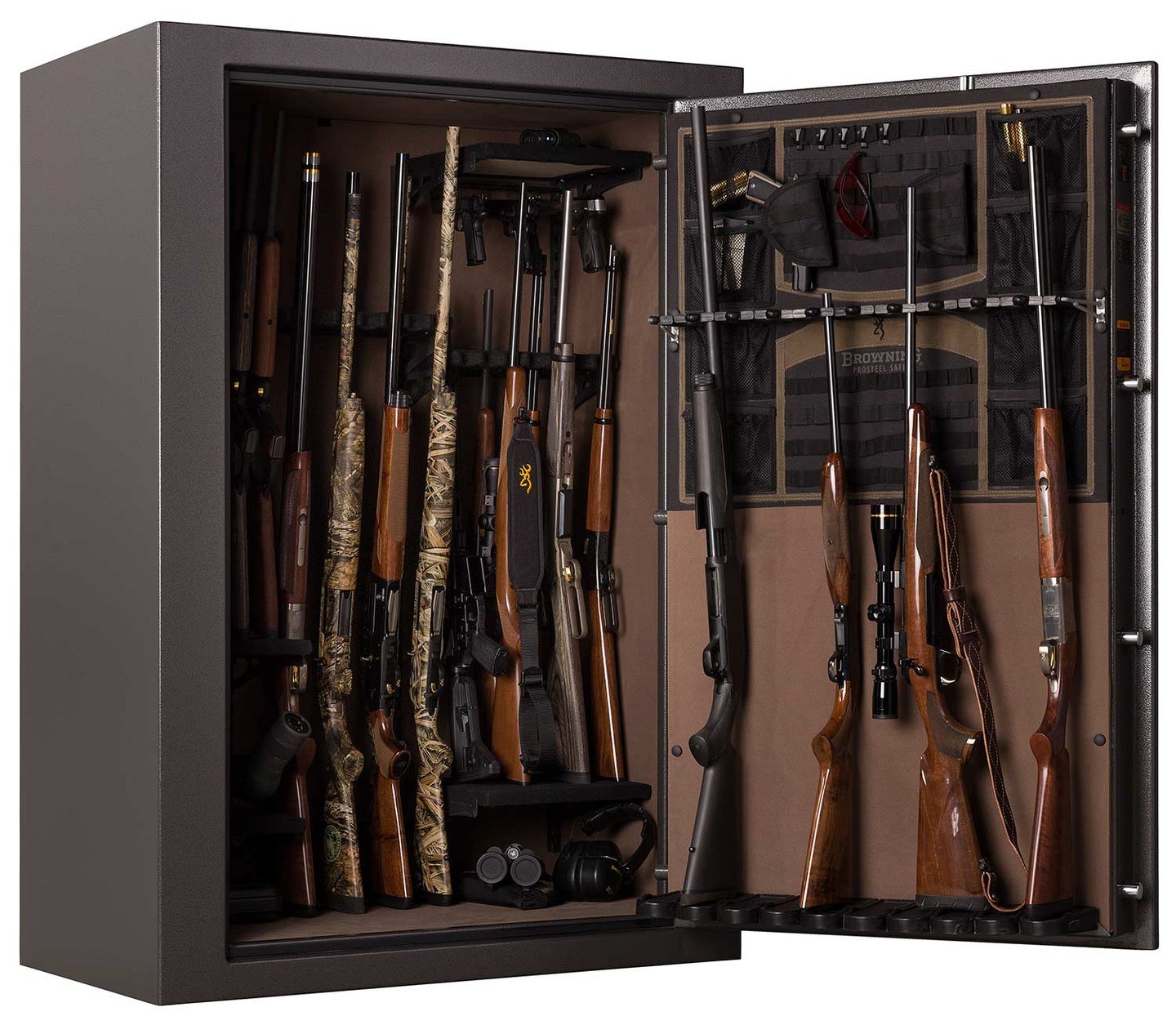 The Complete Guide to Buying a Gun Safe

A gun safe is a big investment—and it’s just plain big, and heavy. You should approach gun safe shopping as if you’re making a lifetime purchase, because you are. Once the safe is in your house, it’s there for good, and you don’t want to move it from room to room either. Here are some tips to help you buy the best gun safe for your needs—from choosing the right safe for your collection of rifles, shotguns, and handguns to getting the best gun safe for the money and picking the right spot in your house to store it.

1. What Size Gun Safe Should You Buy?

“The number one piece of feedback I get from dealers and consumers is they wish they had bought a bigger safe,” says Browning Safe Product Manager Nathan Chapman. It makes sense. Rifle and shotgun collections grow. Plus, people find all kinds of things besides guns to store in a safe. A good rule of thumb: Pick a safe that’s 1½ times as big as what you think you’ll need.

Safe capacity is rated by the number of gun slots in the safe, which is not the same thing as how many guns it holds. Capacity is based on un-scoped rifles or shotguns. Scoped rifles, ARs, and shotguns with extended bolt handles all take up more room. So figure that in as you’re considering gun safe sizes. For hunters who have as many rifles as shotguns, you can expect a safe to hold no more than two thirds of the advertised capacity.

Choose a safe with adjustable shelves and interior. Chapman says that a modular system, such as Browning’s Axis system, lets you tailor the interior of your safe. Several manufactures offer storage on the inside of the safe door for the guns you use most often.

3. Choose a Gun Safe with a Raised Floor

One drawback of many safes is that guns can get dinged as much going in and out of the safe as they can in the field. A raised floor is a nice touch. It helps keep you from banging the toe of the stock against the bottom of the gun safe as you take rifles and shotguns out.

4. Don’t Let Your Gun Safe Go Up in Flames

Every manufacturer offers fire-resistant safes. Be aware that fire ratings aren’t tested by a single outside source. Instead, gun safe manufacturers contract with independent labs, and as a result, their claims often conflict. Do your due diligence.

In populated areas, home fires burn, on average, for about half an hour at 1,100 to 1,200 degrees. If you live in the country, far from a fire station and the nearest hydrant, you risk a longer fire. Burglaries are much more common than catastrophic house fires, but you still might want fire protection. After all, burglars won’t take the precious family photos. Fire will.

5. What Kind of Gun Safe Lock is Best?

Choose a safe with an electronic lock. Electronic locks become more popular every year. They are reliable, and less expensive to replace or repair than conventional locks if they are attacked.

7. How Do You Keep Guns from Rusting Inside a Safe?

If you live in a humid climate, you might want an optional dehumidifier for your gun safe. You can choose among electric, rechargeable, and non-electric desiccants to keep your guns from rusting in storage.

8. Where Should You Put a Gun Safe in Your House?

Many people keep their safes in a garage, says Chapman. They can be bolted to the floor to keep them from being moved. A dehumidifier is essential if you do choose to keep your safe in an unheated, un-airconditioned garage.

Keep your gun safe a secret by keeping it out of sight of people who come to the front door, or may peek into a window. The basement makes a great out-of-sight spot, and the coolest place in the house during a fire is in the basement near an outside wall, away from the furnace. Be aware that even many of the best gun safes aren’t waterproof. If there’s a chance the basement will flood, put the safe somewhere else.

9. How to Move a Heavy Gun Safe

Most gun safe dealers will arrange for delivery and setup. It’s money well-spent to let professionals move a chunk of steel that can weigh more than 1,000 pounds. If you must move a safe yourself, get an appliance dolly and two or three friends to help. Be sure any stairs can withstand the weight of a safe and the people moving it before you take a gun safe down to the basement. And be careful. Safes aren’t safe when they fall on top of you.

The 6 Best Gun Safes for Every Budget

There’s a gun safe for any budget and any size collection. Here’s a sampling, from small to huge.

This basic model is not much more than a steel box with a lock. But it’s way better than no safe, and it includes a storage shelf, padded floor, and both an electronic digital keypad and manual key entry. If you have only a very few guns and aren’t worried about fire protection, this is a solid budget option.

Stack On 14 Gun Safe Stack On

With 14 gun slots and shelving for pistols and other small items, this safe weighs less than 300 pounds and costs about $500. It meets California DOJ safe standards (secure storage is required in California) and is a good choice for someone with a handful of guns whose main concern is keeping guns out of sight and keeping honest people honest.

One of the best-known names in gun safes, Liberty offers an entry-level line starting right around $1,000. The safe provides 30 minutes of fire protection and comes either in an all-long-gun or half gun, half shelf interior. The 24-gun Centurion weighs 365 pounds.

The wide HAWG safe has room for 49 gun slots, plus storage on the inside of the door for scoped rifles and most-used guns. It has 60-minute fire protection, weighs 630 pounds and sells for $1,779.

One of Browning’s most popular models, the 65 extra-wide Hell’s Canyon safe offers 90 minutes of fire protection and a body made of heavy 11-gauge steel. It weighs 1,055 pounds but measures just 60 inches tall, making it easier to fit in some spaces that won’t accommodate a taller safe. The safe starts at $3,169.

With 100-gun capacity and 69 cubic feet of interior space, the Fort Knox Titan swallows up most gun collections. Rated for 90 minutes at 1,680 degrees and boasting a 10-gauge steel liner, the Titan keeps guns about as secure as they can be kept—and it should, given that it weighs 2,200 pounds and starts around $11,000.