BLM Ramps Up Wild Horse Removals Due to Drought

The federal agency has announced an emergency effort to roundup 50% more horses than they'd originally planned from public lands in the western U.S. 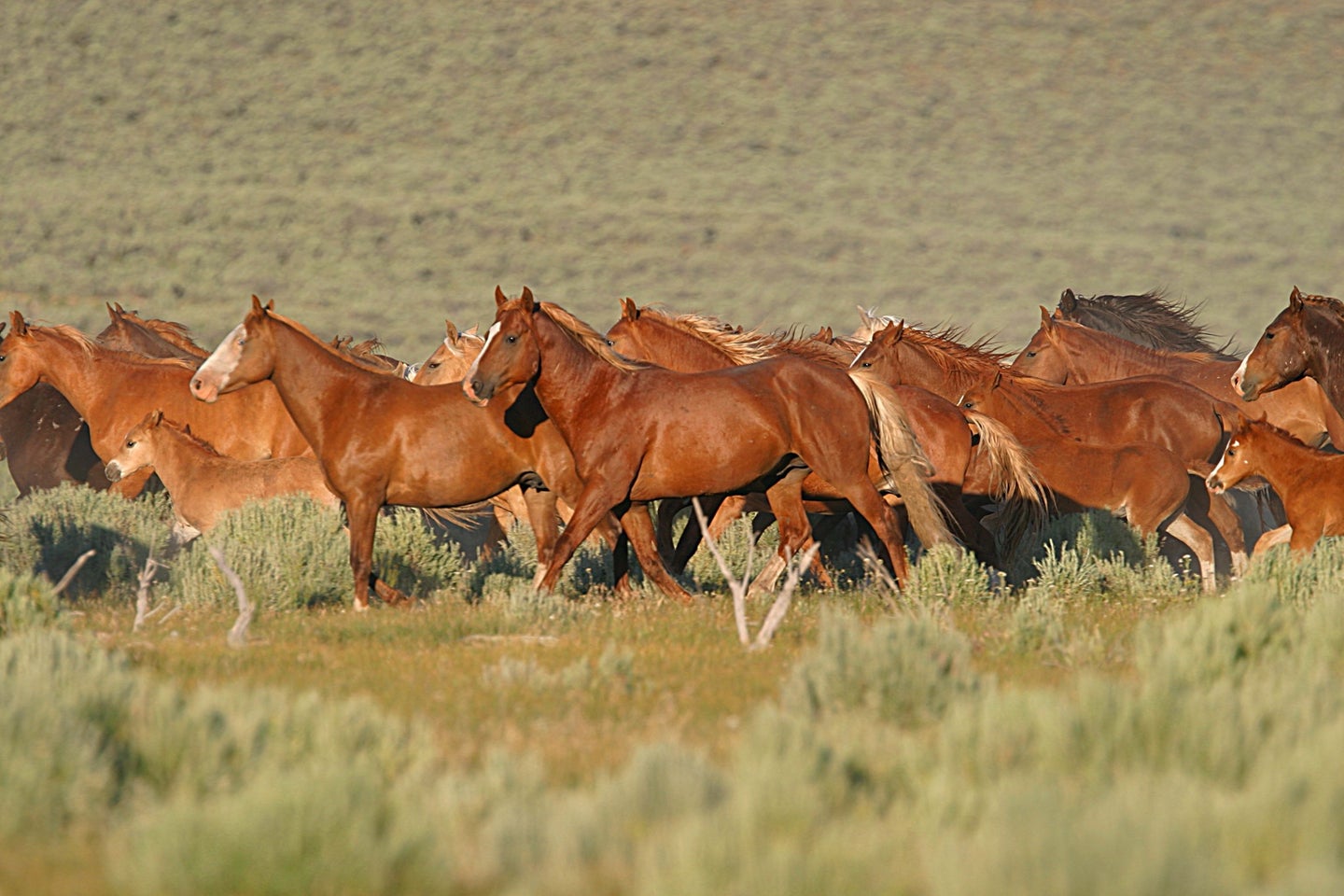 With as much as 90 percent of the western U.S. gripped by a record-setting drought, wildlife managers are working to reduce wild horse and burro populations. The Bureau of Land Management (BLM) is leading a charge to remove a total of 18,000 of these feral critters from the landscape, which is a 6,000-head increase from what the agency originally planned to round up. The agency’s effort is two-fold: The BLM hopes to save horses and burros from death by dehydration and starvation, as well as to preserve vital resources like food sources and water for native species.

“As one of the agencies charged with the responsibility to protect and manage America’s wild horses and burros, the BLM is prepared to take emergency action where we can in order to save the lives of these cherished animals,” Nada Wolff Culver, BLM Deputy Director, said in a press release. “At the same time, we are committed to continuing our efforts to reduce overpopulation across the West and achieve healthy, sustainable herd sizes that are more capable of withstanding severe conditions, including prolonged drought, which are becoming more frequent due to climate change.”

The BLM estimated that the wild horse population on BLM lands in the West was around 86,000 as of March 1, 2021, which is 9,000 horses less than the agency’s 2020 estimate of 95,000 horses. The 9,000 horse reduction was the first year-over-year decrease since 2012—and this year’s removal program was likely to lead to another decrease even before the drought spurred increased efforts. Even so, the BLM says that the current horse and burro population “remains more than three times what is sustainable and healthy for the land and the animals.”

Meanwhile, the prolonged lack of water in the West has put intense pressure on native species, so much so that wildlife managers are considering last-ditch efforts such as flying in water to isolated bighorns on Antelope Island, Utah. Still, some horse advocates contend that the federal government’s efforts are misplaced—and that other pressures, like ranchers’ cattle, cause much more harm to the landscape.

The National Cattlemen’s Beef Association counters that many ranchers have taken voluntary steps to reduce the impact of grazing on the environment and that wild horse removal is necessary to protect the health of the rangelands.

What comes next for wild horses?

The horses removed by the BLM will not be culled. Most of the horses from the roundups will be placed into an adoption program, while around 1,400 animals will be given contraceptive treatments and returned to public lands. Managing the free-roaming mustang population costs taxpayers around $100 million a year—and the majority of this budget goes to caring for horses that don’t get adopted.

Even with this year’s increased roundups, the ecological harm of having large numbers of feral horses and burros living on public land is likely to persist for the foreseeable future, at least until government agencies effectively utilize more efficient means to address the issue. Some politicians have touted large-scale contraceptive use as the best plausible solution. Management through lethal means has long been considered off the table because of many peoples’ emotional attachments to wild mustangs, though some have suggested in recent years that it may be required to truly protect native species.