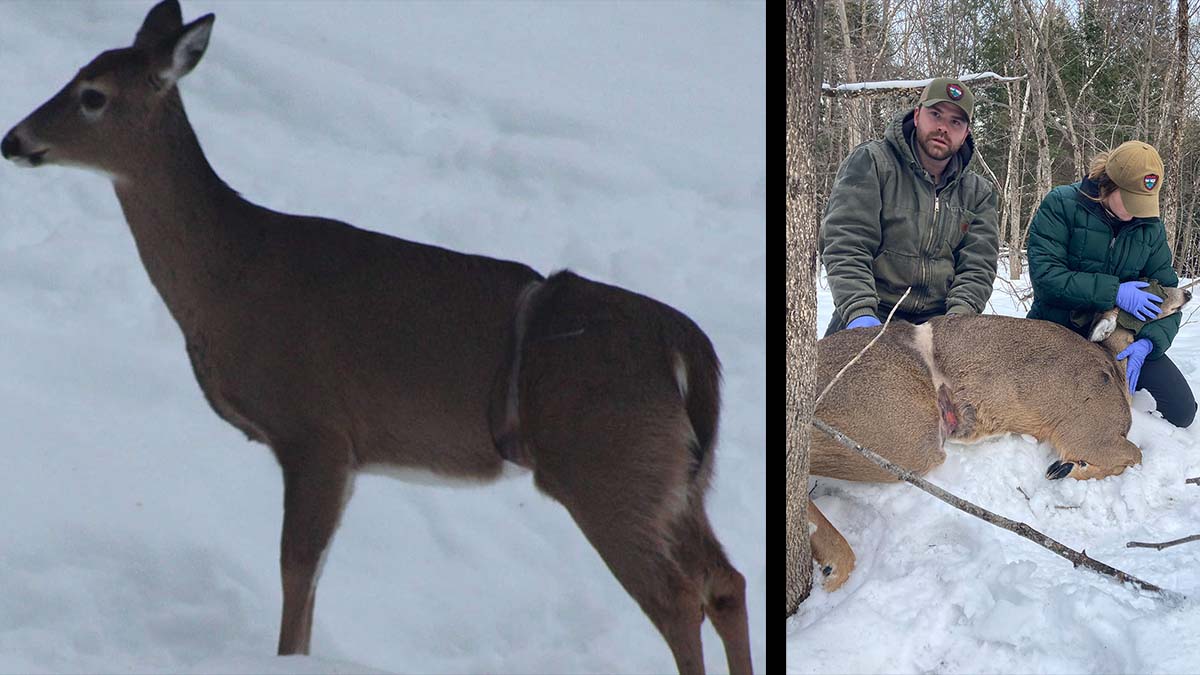 Maine is home to around 300,000 whitetail deer. MDIFW
SHARE

After receiving a tip about a whitetail deer that had a cable cinched around its waist, Maine wildlife biologists were able to work with neighborhood residents to capture the doe and successfully remove a piece of fencing wire that was squeezing the animal’s midsection.

According to Sarah Boyden, a regional wildlife biologist with the Maine Department of Inland Fisheries and Wildlife (MDIFW), a phone call from a concerned citizen first alerted her to the deer’s predicament. Photos showed a wide ring of bare skin completely encircling the doe’s torso. No one could say how the cable had gotten around the deer in the first place.

“It wasn’t clear from the pictures what it was, but it had worn off a band of hair, rubbing against her as she walked,” Boyden wrote on the MDIFW blog. “Other than the missing hair, she appeared healthy and was spending her time with a group of deer frequently seen around the neighborhood.  Although the doe appeared healthy, there was concern that the cable could continue to tighten and affect her survival, so we tried to see if we could intervene.”

Wildlife officials frequently get calls from people concerned about injured animals, but usually, the callers only catch a quick glimpse of the animal and have no idea where it might be found. Locating these animals and confirming their condition can be difficult as a result. In this case, however, the deer was part of a group that frequented a residential area on a consistent schedule. Sightings by several different neighbors allowed biologists to pattern the doe. One accommodating homeowner allowed the biologists to tranquilize the doe from their basement window.

Darting a wild animal with an immobilizing drug always carries risks, because it takes time for the drug to take effect, and until that happens, animals can get themselves “in a tricky situation,” according to Boyden. Animals have been known to fall down a steep hill or into a stream after being darted. In this case, though, everything worked out. The doe fled to a tree line as the wildlife officials waited for the drug to take effect. After several minutes they tracked the doe and found her lying in the snow.

“We quickly snipped the piece of old fencing wire from her, looked for additional injuries, and gave her a reversal drug to bring her out of sedation,” explained Boyden. “Within a couple of minutes, she popped up and trotted off to rejoin her herd.”

Read Next: Javelina Breaks Into Subaru, Eats a Bag of Cheetos, Then Goes for a Joy Ride

While the combination of a patterned deer, observant neighbors, and a willing homeowner led to a good outcome in this case, Boyden stresses that intervening to help wildlife is not always possible—or even necessary. She notes that some animals will wear items like Christmas lights—and in one case, a car tire—for years without experiencing any deleterious effects. The MDIFW advises people to leave wildlife that appears to be injured alone or contact wildlife professionals rather than attempting to intervene.