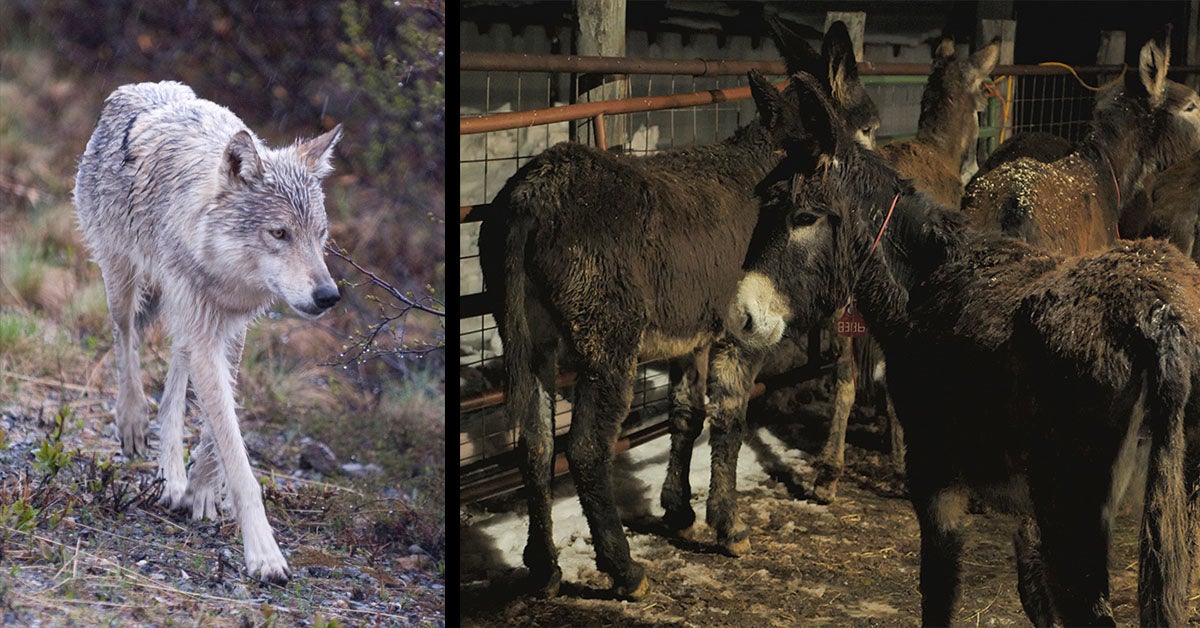 Colorado Parks & Wildlife (CPW) is trying out a creative solution to a recent spate of livestock depredations by wolves in Northern Colorado, which began with the state’s first livestock wolf kill in more than 70 years. The agency is donating six wild burros to rancher Don Gittleson, who has lost three cows to wolves in recent months.

“The idea is to make the burros become a part of the cattle herd to where they will start to protect or consider the cattle as a member of its family,” said CPW officer Zach Weaver in a press release. “We learned that wild burros are more effective because they’ve been in the wild where they’ve had to defend themselves and their herd from predation from animals like mountain lions and coyotes.”

Reports of burros preventing wolves from killing cows in Oregon motivated the move at the cattle ranch in Jackson County, Colorado. Quite a bit of thought was put into selecting the right burros for the job. “Gittleson and I wanted animals that had been at a higher elevation so they were acclimated and had developed hair for the cold,” said Weaver. “We also wanted mature animals that had been on the landscape and would know how to defend themselves.”

The transplanted burros chosen for the job are from Nevada’s high country and were adopted through a facility in Utah. They have already developed some winter hair, according to CPW, but will still need time to acclimate to Colorado’s cold climate. In the meantime, they will temporarily stay in the ranch’s corral with calves. Burros—unlike cows, which are easy prey—are known for chasing, stomping, and kicking any animal that they see as a threat.

Though not on Gittleson’s ranch, a pregnant cow in northern Colorado was recently attacked by wolves and had to be put down. According to The Colorado Sun, the cow didn’t come in for hay at the State Line Ranch near the Colorado-Wyoming border, not far from Gittleson’s place. When a ranchhand found her, she couldn’t walk. “[It was] horrible. She was in bad shape,” said Ben Zak, State Line Ranch cowboy. “[The cow] was really tore up on the back end.”

The wolf pack in Jackson County initially traveled into Colorado from Wyoming. In the meantime, CPW is developing a plan to restore wolves in the state by 2023 after a hotly-contested ballot initiative. Because federal protection of wolves in much of the lower 48 was reinstated in February, the U.S. Fish and Wildlife Service will now also have its hand in Colorado’s new wolf management plan, which will need to account for how best to protect livestock from potential depredations.

In addition to burros, Gittleson has also added a night watch and an electric fence with flags meant to deter wolves. So far, he hasn’t come across any wolf tracks or reported any new attacks. “A lot of our monitoring will be based on feedback from Gittleson for this pilot program,” Weaver said. “He’ll tell us if he’s seeing as many wolves as he has in the past, or if they’re still coming through his property at as high a frequency as they were.”