Why Are Wild Turkey Populations Diminishing?

Hunters across the country have noticed fewer turkeys year after year. We spoke to several state wildlife biologists to learn why this happening—and if there's any hope for improvement 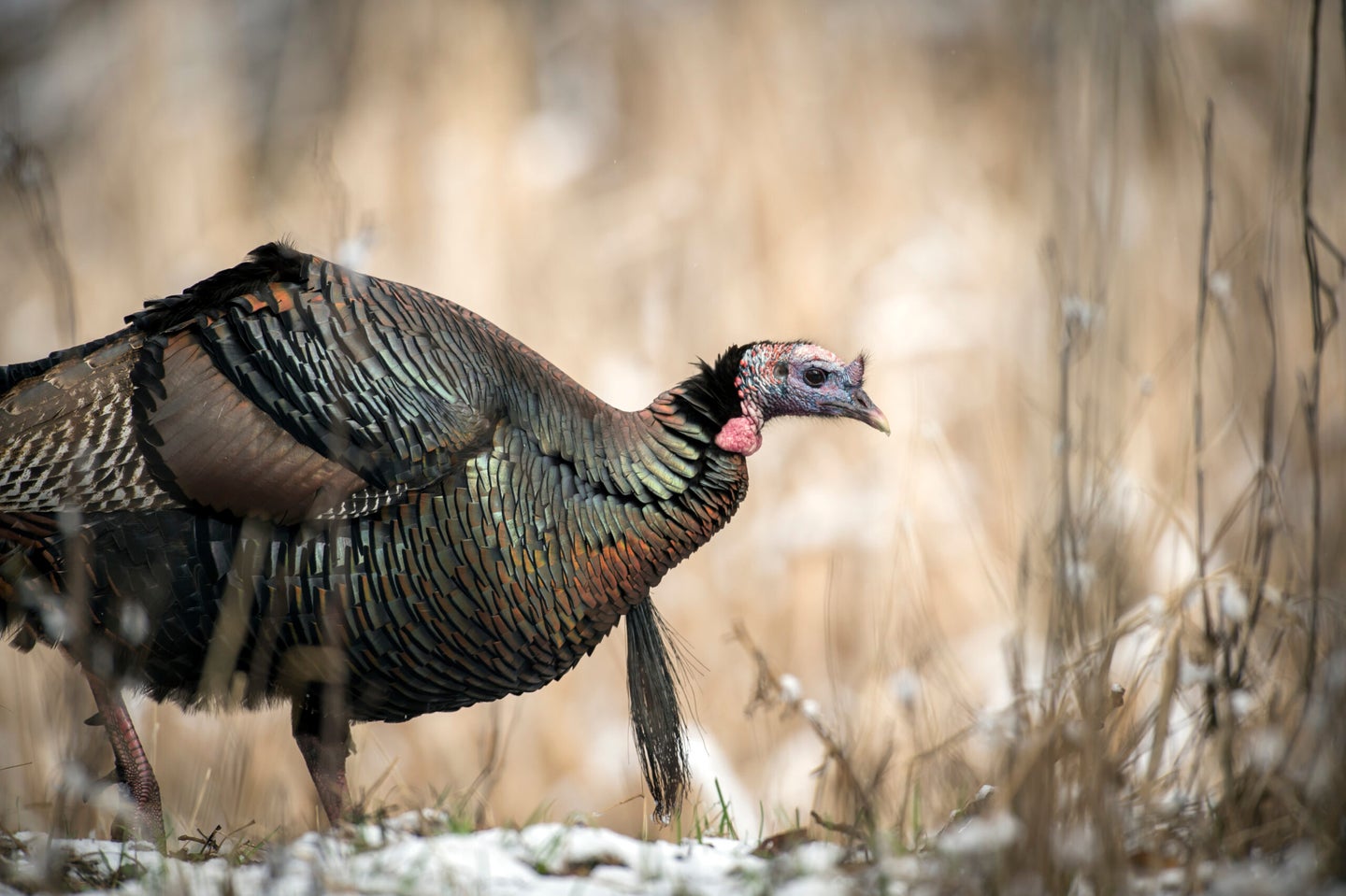 Some states are pushing spring turkey seasons back to give the birds more time to breed and nest in early spring. John Hafner
SHARE

Wild turkeys remain the poster children of North American conservation triumphs. But even as we celebrate that success every spring, whispers have started to erode the narrative. Turkey populations and harvests have decreased in some areas. Hunter attitudes, once upbeat and almost giddy, have taken a similar southward turn. And in the age of social media, it seems everyone has an opinion about why turkeys might be in trouble in some parts of the country.

Even nature conspires against turkeys. Wet springs negatively affect annual production, and the effects of extreme weather can be more striking in arid regions, such as the southwest, or in areas that experience severe winters. In fact, weather was a major limiting factor in the historical range of turkeys. Chad Lehman, a senior wildlife biologist for the South Dakota Department of Game, Fish and Parks, says it remains the main factor affecting turkey reproduction and survival in his state. “Dry springs and summers—not drought—are important for nesting and brood rearing,” he says. “Winter weather is important, as it can kill turkeys during the winter months, and mild winters also benefit wild turkeys.”

Farther south from Sandrini’s home state, unusually dry conditions can negatively affect turkey populations, especially when drought limits vegetation and the insects poults rely on for growth and survival. “Drought conditions that persisted from the summer of 2019 through 2021 had damaging effects to all plant communities and wildlife in Nevada,” adds Shawn Espinosa, upland game staff specialist with the Nevada Department of Wildlife.

2) Turkeys Are Moving to the ‘Burbs

Wildlife professionals marvel at the adaptability of turkeys, but like whitetail deer and giant Canada geese, the birds have proven to be perhaps too adaptable in many urban and suburban areas. In fact, city turkeys have become nuisances in some heavily populated spots, aggressively chasing pedestrians or motorists, which has given them a bad rap.

David Scarpitti, a wildlife biologist with the Massachusetts Division of Fisheries and Wildlife, notes similar issues in his state. “Feeding of wildlife is a huge factor affecting the distribution of turkeys, especially in eastern portions of the state, which are far and away more developed,” he said. “And in my opinion, it’s increasingly affecting hunting opportunities.”

Like whitetails, turkeys have become far more tolerant of suburbanization. That receptiveness, as is the case in places such as Staten Island and Boston, has kept them comfortable in haunts where they cannot be hunted. So in those places, populations are booming. The turkeys are often taking advantage of bird-feeder opportunities that they do not have in traditional habitat.

As biologists learn more about turkeys, some believe that traditional season structures might negatively affect reproduction, especially if spring seasons open too early. Emily Rushton, a state wild turkey biologist with the Georgia Department of Natural Resources, said research in that state indicated that 60 percent of gobblers there are harvested during the first two weeks of the season, before hens begin incubating nests, which, biologists believe, might disrupt breeding activity. So, with the support of most state turkey hunters, the department adjusted the season opener to allow more time for breeding before hunting begins.

“Additionally, our research has shown that gobbling, an essential component of turkey breeding, is disrupted by hunting activity and the removal of toms from a landscape,” Rushton said. “Removal of toms, particularly dominant toms, may be impacting breeding activities, and these disruptions could be influencing productivity.”

Conversely, other states deal with calls for season structure changes when they might not be appropriate. Alaina Gerrits, a former assistant upland wildlife ecologist with the Wisconsin Department of Natural Resources, said that the state recently faced a push to condense zones, start the season earlier and eliminate time periods (the state’s six-week season is broken into six one-week segments to distribute hunting pressure and harvest). And that, she said, would have been a mistake.

“The conservative framework we have in Wisconsin is the gold standard,” Gerrits said. “It allows us to separate harvest and hunting pressure across time and space, providing ample hunting opportunities while also allowing mature toms to breed before they are harvested. Many of the states in the southeastern part of the country are forced to be reactionary after seeing brood counts decline. In Wisconsin, by maintaining our current structure, we can remain proactive in providing opportunity to hunt while also protecting productivity.”

Not surprisingly, habitat degradation and resulting poor poult recruitment were by far the top limiting factors mentioned by turkey biologists, especially those from the south and southeast, where population declines have been more noticeable and perhaps severe than in other areas. In a nutshell, changing land-use practices and a lack of sound forest management have reduced quality nesting and brood-rearing habitat in many areas. That directly affects nesting and recruitment success, especially when other factors—such as drought or excessively wet springs—arise.

“Georgia has indeed experienced turkey population declines, like most of the Southeast,” Rushton said. “We know that multiple factors have led to these declines, some of which we have a greater understanding of than others. We know that habitat loss and degradation have occurred in Georgia, particularly in the Piedmont region, a historical stronghold for turkey populations. Marginal habitats will still produce turkeys, but subpar turkey habitat—such as unmanaged forests mixed with suburban landscapes—is excellent predator habitat, and turkeys in these areas are increasingly susceptible to predation, which is a limiting factor in poult production and survival.”

Even Missouri, once the undisputed titan of Eastern turkey hunting, hasn’t been immune. In fact, the downward trend is striking. “We have been monitoring the success of the turkey hatch annually since 1959,” said Reina Tyl, a wild turkey and ruffed grouse biologist with Missouri Department of Conservation. “Unfortunately, the number of poults produced per hen each year has been on a long-term declining trend for several decades. Additionally, on average across the state, each hen has produced one or fewer poults for the last six years in a row. This has led to fewer turkeys on the landscape than what folks were used to seeing a decade ago.”

Biologists agree that enhancing nesting and brood rearing habitat is the best way to help boost annual production. State agencies often conduct such activities on public lands, but because most turkey habitat in many states is privately owned, landowners must also chip in. Jeremy Wood, a turkey program coordinator for the Arkansas Game and Fish Commission, says that many states have biologists who work with landowners to create habitat improvement plans for turkeys and other wildlife. Several state and federal programs also offer financial assistance or cost-sharing measures to accomplish habitat work.

“I would highly encourage landowners to reach out to their respective state agencies to see what opportunities exist in their states,” Wood said. “With 80 to 90 percent of the landscape in private ownership, improving habitat on private land for turkeys is key to long-term population sustainability of wild turkeys. Focusing solely on public lands in and of itself won’t be enough.”

Where Do We Go From Here?

Turkey populations face many obstacles in some regions, but the scene isn’t entirely doom and gloom. After all, more than 6 million birds still roam the country, which is up from 1.5 million in 1973 and down only about 15 percent from a historic high of about 6.7 million in the early 2010s. In fact, memories of those historic highs and the human tendency to recall “the good old days” might constitute another challenge for turkey hunters.

“Honestly, balancing expectation with reality is a big challenge here,” said Roger Shields, a wild turkey program coordinator with the Tennessee Wildlife Resources Agency. “I also hear that population numbers are down across the state, and we’re concerned about those trends. However, the expectation that we will return to the population numbers seen during the heyday of turkeys is not very likely.”

Although the future might seem unclear, turkey biologists agree that much more work and study are required to find long-term solutions.

“My opinion is that while we very clearly understand that annual reproduction is the driving factor behind turkey numbers, our understanding of the issues that dictate reproduction at the landscape level is still pretty vague,” said Adam B. Butler, a wild turkey program coordinator with the Mississippi Department of Wildlife, Fisheries and Parks, and co-chair of the National Wild Turkey Federation’s National Technical Committee. “Secondarily, we really do not understand what constitutes ‘sustainable’ turkey numbers. In many parts of the country, turkey populations are only recently coming down off their post-restoration boom. It is probably unrealistic to expect that the abundances seen during the boom phase will be the number at which populations stabilize long-term.”

Hunters, of course, want answers now, but Butler said it will take time to develop the science needed to address the issues facing turkeys. However, he emphasized that folks shouldn’t panic. “Turkey populations are not near the verge of extinction,” he said. “So while hunters may get frustrated at the lack of instant action, they need to keep in mind that wise management takes time to get right. We will figure these things out in time.”