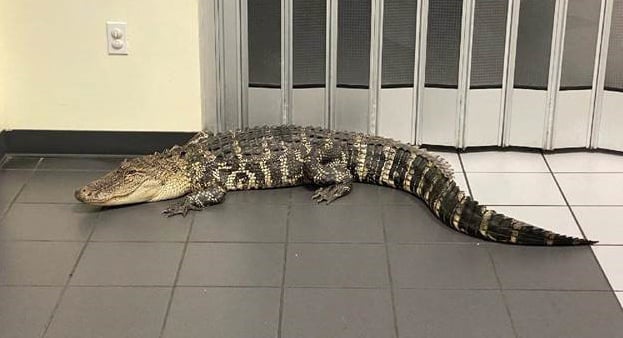 The Hernando County Sheriff's department caught and later released this gator that was found in a post office.
SHARE

A 7-foot alligator was found roaming a post office in Spring Hill, Florida, on June 9. Several deputies from the Hernando County Sheriff’s Office reported on the scene after a local patron tried to mail a package. They found the gator in the lobby. The incident took place at 3:32 a.m. The alligator appeared to have entered the post office just like anyone else would have—through the front door. The post office has automatic double doors that slide open when the motion sensors are activated.

The post sparked an immediate response on social media. “Looks like we didn’t have to go to the Everglades this weekend to see an alligator,” one person commented. Another added that the gator “promptly left when he saw what it cost to mail a package these days!”

Hernando County is on the Gulf Coast, just north of Tampa Bay. Alligators are known to inhabit all 67 counties of Florida. The state record alligator harvested in Florida was over 14-feet long. Alligator encounters are so common in the Sunshine State, that the Florida Fish and Wildlife Conservation Committee (FWC) has established a toll-free nuisance alligator hotline, which is used to dispatch on-call alligator trappers.

This incident in Hernando County occurred soon after several other notable alligator encounters in the state. In a near-fatal attack, a 9-foot gator chomped a diver’s head on May 31. Earlier in May, a gator charged a tarpon angler in the Everglades.

“In recent years, Florida has experienced tremendous human population growth,” according to officials on FWC’s dedicated Living With Alligators page. “This can result in more frequent alligator-human interactions, and a greater potential for conflict.”