Want to Know the Age of Your Buck? Ship a Tooth to This Montana Lab

Ever wonder how old your deer was? For just $75, these scientists can help you figure that out 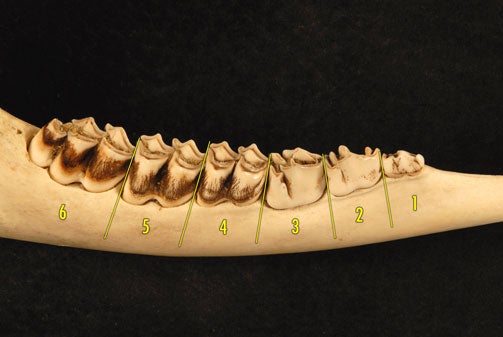 Neck. Spread. Posture. Nose. In the field, these traits can give you a good general idea of a buck’s age. But if you’ve tagged the deer and just have to know for sure, you can pluck a tooth and hand it over to scientists. Carolyn Nistler at Matson’s Lab will turn it into rubber, slice it, examine it under a digital microscope, and provide that critical detail for the hunting story you’ll be telling for the rest of your life.

Nistler is the proprietor of the unique lab in Manhattan, Montana, that specializes in cementum age analysis of wildlife teeth. Gary Matson founded the lab in 1969, and developed many of the techniques it still uses today. Nistler met Matson at an aviation conference in 2013 (both are pilots), and over the next two years, she learned his techniques. In 2015, she bought the lab from Matson, and now she and her staff spend long days looking at rings of cementum.

Cementum is a hard, calcified layer of tissue that covers the root of a tooth. Because it forms slowly over the years—and because it grows differently in different seasons—it leaves microscopic traces of its yearly development, known as annuli. A careful analysis of the annuli, which are like the rings of a tree trunk, can determine the animal’s age with up to 90 percent accuracy, according to the lab’s website.

But Nistler’s work extends far beyond the stories her clients might tell their grandchildren, since biologists use age data to monitor and study wildlife populations around the world. Nistler gets teeth from Canada to Croatia, and determines the ages of animals from beluga whales to European lynx.

In the hunting world, information the lab produces can help wildlife managers determine hunting seasons and quotas or learn more about aging and reproduction, for example. “We’re hunters, we believe in hunting as a conservation tool,” Nistler told the Independent Record. “Hunters are definitely wanting to become more informed of the role they play, and age is part of that.”

Matson’s Lab processes about 400 teeth a day and more than 100,000 a year. While Nistler’s team specialize in teeth, they also do ovary analysis and skeletochronology, to determine the ages of animals whose toes have growth rings. “Every living animal has some part of their body that’s influenced by annual growth cycles,” Nistler said. “It’s just figuring out where it is.”.

So, if you’re curious about the age of the next critter you tag, or if you’d just like to contribute to science, consider sending in the dentures. For $75, Nistler and her team will analyze five teeth. And you’ll have stories to tell for decades.