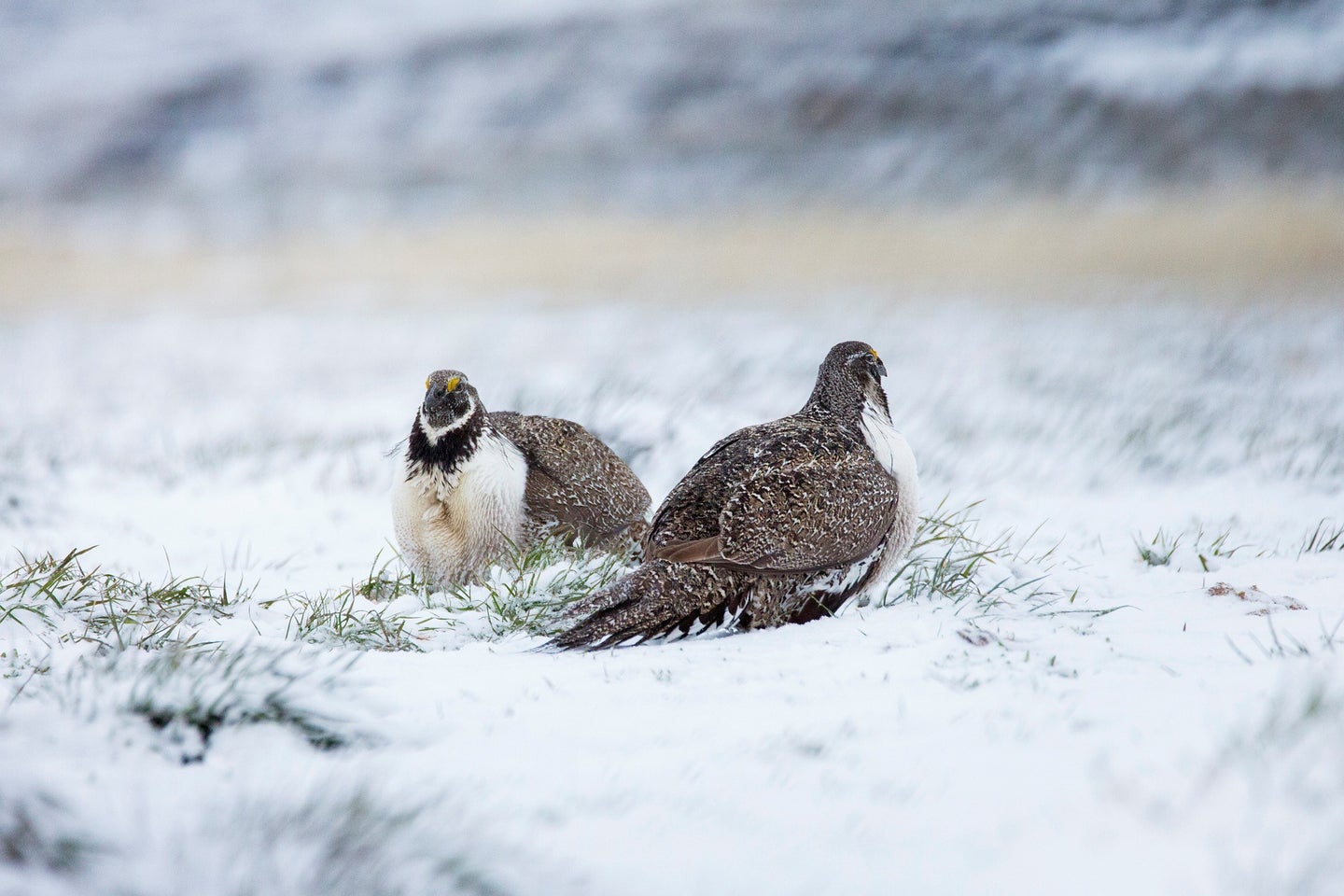 Some experts say habitat restoration will do a better job of keeping sage grouse off the Endangered Species List. iTopLoveliness via Pixabay
SHARE

As wild sage grouse populations decline and the species teeters on the brink of being listed under the  Endangered Species Act, the Wyoming House is considering legislation that would extend certification of the state’s only captive sage grouse breeding farm. The legislation, which passed easily in the state Senate, is now headed for a vote on the House floor. It would extend certification of the Diamond Wings Upland Game Birds, which otherwise expires due to a five-year sunset clause this year.

The legislature passed the game farm legislation in 2017 in hopes that captive breeding programs could prop up sage grouse numbers sufficiently to keep the bird off the Endangered Species list. Sage grouse numbers have dropped more than 80 percent since the 1960s as they have lost their sagebrush habitat due to energy development, wildfire, and the spread of cheatgrass and other invasive plants. Cheatgrass is especially damaging to sage grouse habitat because it burns readily, and it survives frequent fires better than native sagebrush grasses are able to. Sage grouse are specially adapted to a diet of Sagebrush buds, leaves, and bunchgrasses and actually lack the gizzard found in most bird species that would allow them to digest seeds.

The Push and Pull of Sage-Grouse Conservaton

Listing the sage grouse under the Endangered Species Act would have a huge impact on Wyoming’s energy and grazing industries. Therefore, those industries have a vested interest in keeping the bird from being listed. One result of those efforts was the 2017 bill to legalize sage grouse farms in the hope that the birds could be released to augment dwindling wild populations. The bill was controversial then, and controversy has only renewed as legislation to lift the sunset clause advances through the legislature.

The only facility to apply for and receive certification, Diamond Wings was finally able to collect and successfully hatch wild sage grouse eggs last year, and that was largely due to a huge influx of donations in 2020 by the Western Sage Grouse Recovery Foundation, a group with strong ties to the oil industry. Some legislators cited the successful hatches as justification for lifting the sunset clause to give captive breeders more time. They hope that the propagation and eventual release of sage grouse back into the wild will boost populations.

Others disagree, and cite the need for habitat improvement, as does Bureau of Land Management director Tracy Stone-Manning. ”If we would have to farm a species in order to keep it alive, that tells me we’re failing,” she says. Conservationists believe focusing on improving and restoring sage grouse habitat is a much better way to ensure the long-term health of sage grouse populations.

Could a Game-Farm Sage Grouse Survive In The Wild?

As of now, Diamond Wings has not released any of the grouse it has hatched. Wildlife professionals, most of whom oppose the bill, point out that raising sage grouse in captivity is not an efficient method of increasing populations, and that captive-raised birds released into the wild have extremely low survival rates because they don’t know how to evade predation.

As of now, the question of how many sage grouse would survive being released is moot, because Wyoming law will have to change before the birds can be legally released. The current bill only allows Diamond Wings to continue gathering eggs, hatching, and rearing sage grouse in captivity.