Man Arrested at U.S.-Mexico Border Trying to Smuggle 52 Snakes and Lizards Hidden In His Clothes

According to authorities, the suspect had 43 horned lizards and nine snakes, including three dwarf boas, hidden in his jacket, pants pockets, and groin area 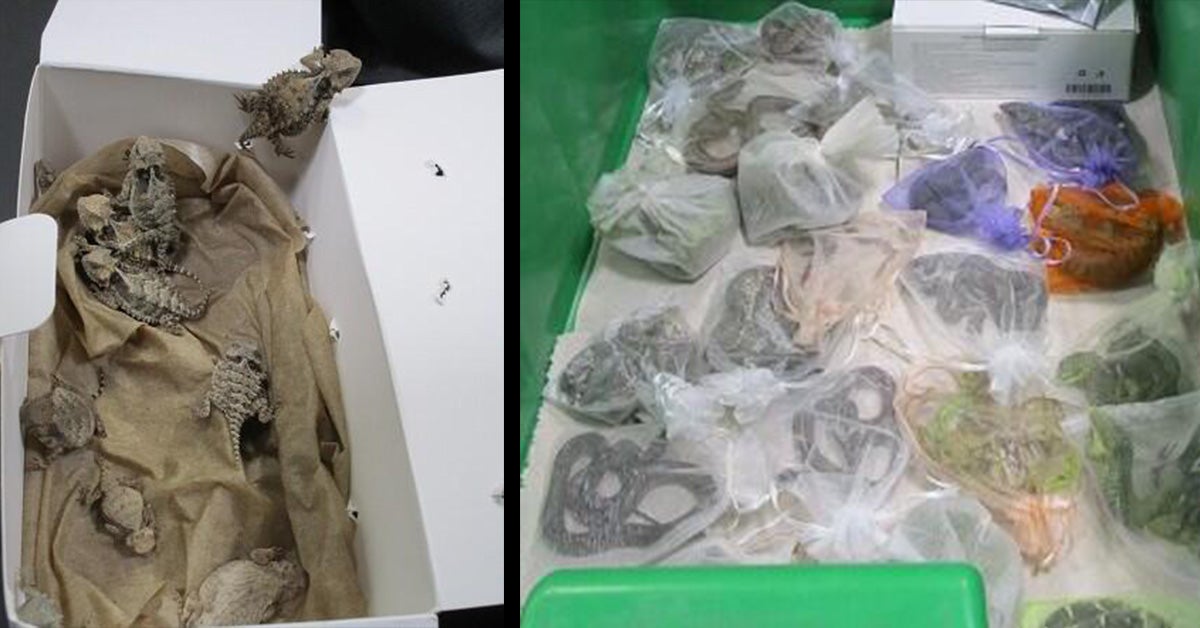 In the early morning hours of February 25, U.S. Customs and Border Protection (CBP) apprehended a man attempting to cross into San Diego with 43 horned lizards and nine snakes concealed under his clothes. In a statement, the CBP called the incident a “significant smuggling attempt.”

Officers say Jose Manuel Perez, a 30-year-old American citizen, pulled his truck into the San Ysidro Port of Entry around 3 a.m., where the CBP officer referred Perez and his vehicle for additional screening. Upon personal examination, “agents removed a total of 52 bags of reptiles…concealed in the man’s jacket, pants pockets, and groin area.”

Herpetologists at the San Diego zoo later identified some notable species among the confiscated animals, including three dwarf boas, four conehead lizards, a Uribe’s false cat-eyed snake, and a Pacific Coast parrot snake. Perez told the officers the reptiles were his pets, but an ongoing investigation revealed these animals were merely the latest in a steady stream of rare Latin American reptiles he has smuggled into the U.S.

In fact, the day before his arrest, Perez and his sister had been indicted by a federal grand jury in Los Angeles that alleged the siblings were a part of a long-running wildlife trafficking ring. According to the San Diego Union-Tribune, “the ring is accused of importing roughly 1,700 animals, including turtles, monitor lizards, and baby crocodiles, at a market value of more than $739,000.”

Perez sold the reptiles on Facebook under the name “Julio Rodriquez.” He frequently posted ads on Facebook groups that catered to reptile enthusiasts. To make his sales look legitimate, Perez created labels for a fake business called “Reptiles Express” and sent 475 packages under the name from October 2018 to March 2021, according to the affidavit. Records also show that Perez crossed the border into San Diego 36 times last year and would soon post ads for reptiles on social media with new wildlife for sale after each trip. Last month, Perez was prohibited from entering Tijuana when Mexican officials learned he was traveling with 15 turtles, 12 snakes, and eight chameleons in his vehicle.

The U.S.-Mexico border is frequently the site of wildlife smuggling. In San Diego alone, CBP has seized fighting cocks, tiger cubs, sea turtle eggs, ivory, and whale bones. The reptiles taken from Perez were transported to a safe location where many of them will remain in quarantine.

“Smugglers will try every possible way to try and get their product, or in this case live reptiles, across the border,” said Sidney Aki, CBP Director of Field Operations in San Diego. “On this occasion, the smuggler attempted to deceive CBP officers in order to bring these animals into the US., without taking care for the health and safety of the animals. CBP enforces hundreds of laws at the border for more than 40 different government agencies, in part to help stop smuggling attempts like these which can lead to trafficking of possibly endangered species.”