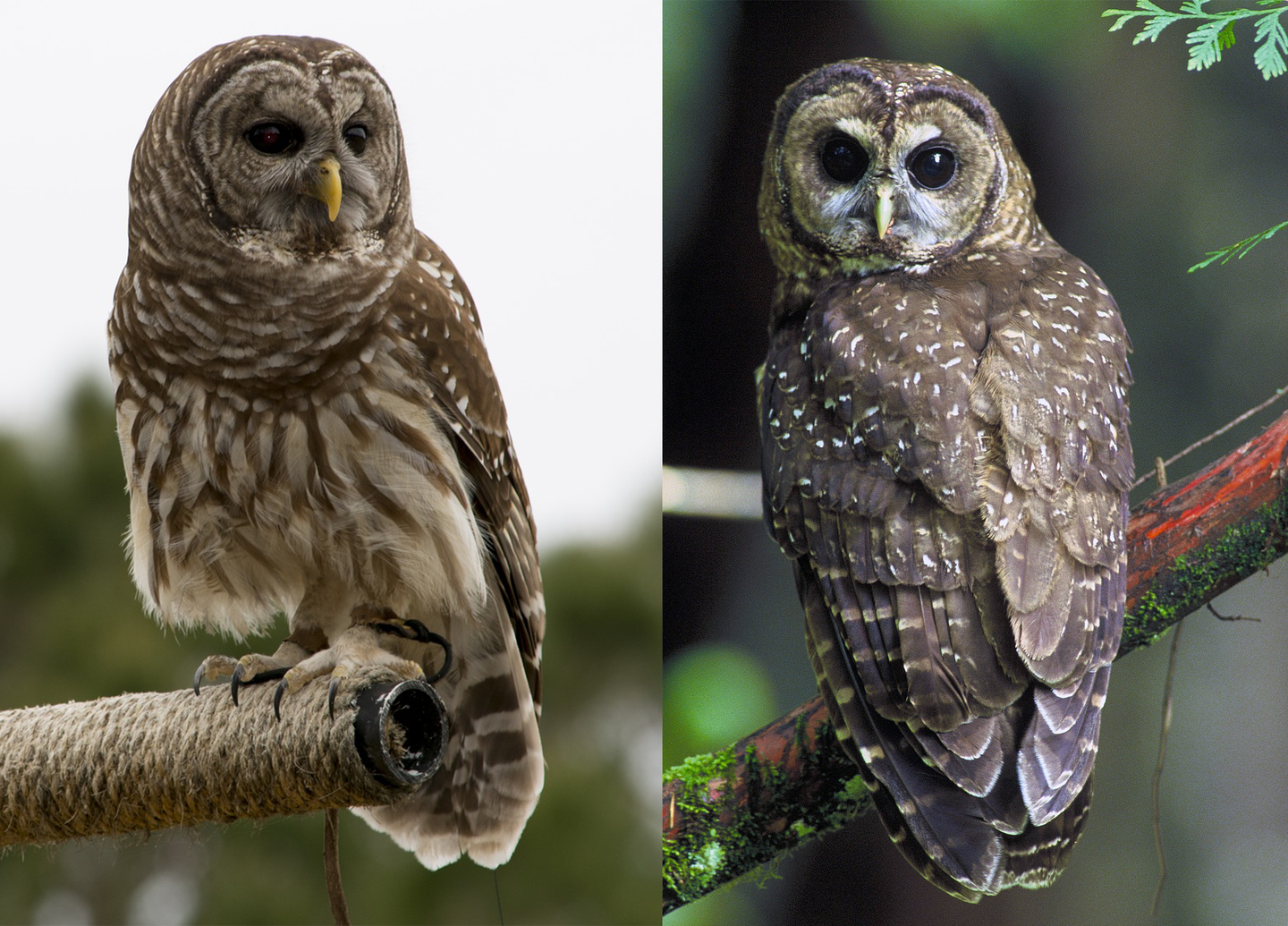 The invasive barred owl (left) is taking over the range of the northern spotted owl (right) in the Pacific Northwest. kshawk108 (left) FotoshopTofs (right) from Pixabay
SHARE

A new study suggests that shooting invasive barred owls may be wildlife managers’ best tool to save the Pacific Northwest’s northern spotted owl from extinction. Researchers used 12-gauge shotguns to gun down a total of 2,485 barred owls in several locations over a ten-year period, while letting them fly free in adjacent “control areas.” Northern spotted owl populations remained stable and decreased only by 0.2 percent per year in the zones where barred owls were shot, while spotted owl populations decreased a striking 12 percent per year in the control zones where barred owls were left alone.

“It’s ultimately a tradeoff between doing nothing and basically having this one species [the barred owl] that’s reducing biodiversity overall, or we take these steps to maintain the biodiversity,” Dave Wiens, a U.S. Geological Survey (USGS) wildlife biologist who led the research, told Anthropocene.

The study included an important caveat: While the northern spotted owl populations stabilized, they did not increase, nor was there significant evidence of new spotted owls joining the population, either because of offspring or migrating birds.

“It’s an alarming finding,” says Wiens. “Without numbers coming into those populations, those birds eventually get old and die.”

Why Are Northern Spotted Owls Threatened?

The northern spotted owl is a medium-sized “perch and pounce” owl that preys on small forest mammals during the cover of night. They mate for life and can live up to 20-years. You can identify a northern spotted owl by its white-dappled chocolate-brown hue and dark-brown eyes surrounded by prominent facial discs. Northern spotted owls traditionally lived in forests throughout southwestern British Columbia, western Washington and Oregon, and northwestern California.

Northern spotted owl populations have been on the decline since at least 1985, when monitoring began. The species has been listed as “Threatened” under the Endangered Species Act since 1990. The U.S. Fish and Wildlife Service (USFWS) believes that timber harvesting, other forms of land conversion, and natural disasters such as wildfires and windstorms drastically reduced the nesting and foraging habitat of the northern spotted owl. USFWS estimates suggest that their habitat has been decimated by over 60 percent in the last 150-years.

Then came the barred owls, a larger and more aggressive species native to the eastern U.S. Scientists believe they started expanding westwards in the early 1900s. But they do not know why this occurred, nor exactly when they reached the Pacific Northwest. What they do know is that their arrival spelled disaster for the northern spotted owls. Barred owls now outnumber—and outcompete—northern spotted owls in much of the latter’s historical range. Barred owls are known to displace and disrupt northern spotted owls, and in several recorded cases, even kill them.

The USFWS is currently in the beginning stages of developing a strategy for the management of spotted owls that will “consider all approaches including lethal removal (of barred owls).”

Meanwhile, the organization recently proposed a revised rule that would allow for fuels management and sustainable timber harvesting on 204,797-acres of land that was identified as “critical habitat” for spotted owls back in 2012. The revised rule is a significant walk-back of a January 15 proposal that would have excluded 3.4 million acres of critical habitat for the northern spotted owl from protection. The agency is currently seeking public comment on the revised proposal.

In December of 2020, the USFWS said that “uplisting” the northern spotted owl to endangered from threatened was “warranted,” though the agency chose not to take any direct action to officially change the listing in part because it would not “result in any additional regulatory restrictions… nor substantively impact the conservation of spotted owls.”