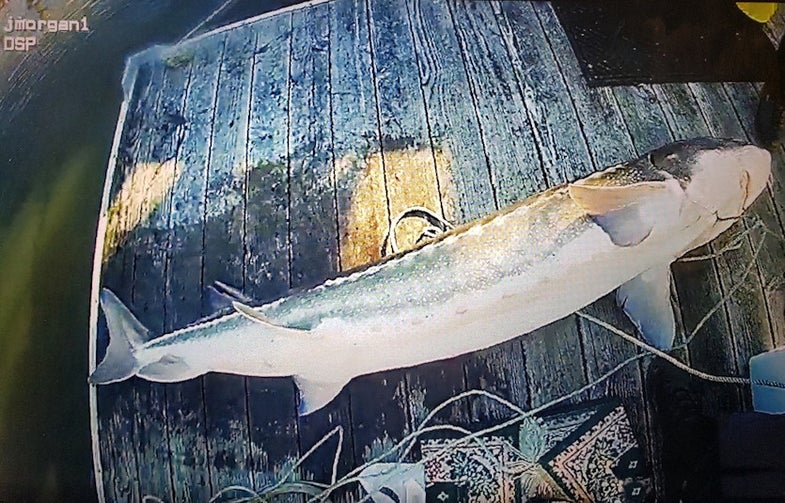 Without even catching a single fish, anglers on Scappoose Bay, north of Portland, near the Columbia River, helped free five white sturgeon last week, including a 7 1/2-footer, and earned a cash reward for their efforts. The anonymous fishermen noticed that their counterparts on a neighboring boat caught a sturgeon, but failed to release it as required by law. They reported the incident to Oregon State Police Fish and Wildlife Troopers, who, after two more days of surveillance, approached the suspected poachers.

The illegally taken 7 1/2 foot sturgeon was estimated to be 50 to 80 years old. The age and size are significant because large sturgeon are usually female and older females produce 10 times more eggs than younger females. An 80-year-old female can carry 100 pounds of eggs.

“Sturgeon are a long-lived, slow-growing, and late-maturing species,” said Tucker Jones, Oregon Department of Fish and Wildlife Columbia River program manager. “They already face numerous ecological, environmental, and other human-caused challenges on the road to recovery. Poaching, especially of an adult oversized sturgeon, is a huge issue.”

The largest fish was in the boat. The other four were on sunk lines attached to the dock. One of the people aboard the boat claimed all of the illegal catches and was cited for the take and possession of oversized white sturgeon, which is a felony. Additional charges include take and possession of white sturgeon, no fishing license, no combined tag, and using barbed hooks.

Sturgeon are Known as “Living Fossils” for a Reason

Sturgeon have plied the Earth’s waters for 200 million years. White sturgeon are North America’s largest freshwater fish, reaching lengths of 12 feet and weights of over 1,000 pounds. Once abundant in Oregon’s Columbia and Willamette Rivers, white sturgeon numbers have dropped precipitously over the past century and a half. While highly-regulated recreational catch-and-keep sturgeon fishing does exist, most sturgeon fishing in the Pacific Northwest is catch-and-release only.

But there is a significant incentive for poachers to violate that regulation. Sturgeon caviar can sell for $100 an ounce on the black market. Wildlife crime, mirroring a global trend, has increased significantly in Oregon over the past decade. State data shows that more than 110,000 animals were illegally harvested between 2012 and 2020.

So, the Oregon Department of Fish and Wildlife has countered with a program that incentivizes the reporting of poaching. The Turn-in-Poachers (TIP) program offers rewards of up to $1,000, or hunter preference points, for reporting fish and wildlife crimes that result in an arrest or a citation. The program protects species from bighorn sheep and cougars to osprey and sturgeon. But, the state’s 128 Fish and Wildlife troopers are not nearly enough to patrol 90,000 square miles of Oregon land and a vast network of inland and marine waterways. So, the program partners with the public.

“We’ve gone to great lengths to bring the public on board with some of the issues that our fish and wildlife are facing at the hands of people who, frankly, disregard laws that protect our natural resources,” Yvonne Shaw, coordinator of Oregon’s Stop Poaching Campaign, told KGW8 News in Portland last fall when the state announced an increase in rewards.

When Troopers Scott Bernardi and Justin Morgan approached the suspicious boat at a dock on Scappoose Bay, tip in hand, they were prepared to take action. They released the five sturgeon, cited the poachers, and offered a reward to the dutiful boaters who may not have caught anything—but at least they were fishing legally.