There Are Too Many Wild Horses and Burros in the American West, According to Survey 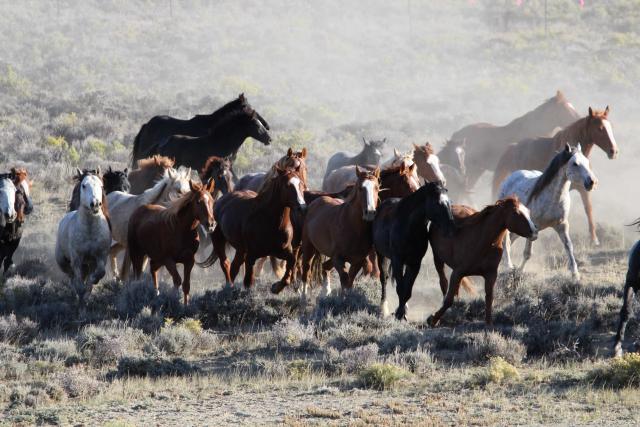 The West has an ongoing wild horse and burro problem. Despite a two-year decrease, the population of these feral critters remains three times higher than the management goal set by the Bureau of Land Management (BLM). According to a recently released analysis, there are more than 82,000 such animals on a range that has a population target of 27,000.

“Chronic overpopulation and ongoing drought causes a scarcity of food and water on the range, which could impact mortality and fertility rates, or cause an increase in migration of animals outside normal herd ranges and survey boundaries,” explains the BLM. “Animals that moved completely outside of the areas where BLM conducts aerial surveys would not be counted at all and could lead to an underestimate of the true numbers on the range.”

According to the agency, the wild horse and burro population dropped by nearly 4,000 individuals from 2021 to 2022, but there are still 64,604 wild horses and 17,780 wild burros on land managed by the BLM. The Wild Free-Roaming Horses and Burros Act mandates the importance of maintaining ecological balance when it comes to herd management. The BLM’s population control program uses birth-control efforts and round-up and adoption initiatives—six wild burros were relocated to a Colorado rancher, for example, to protect his cattle from wolf attacks.

More than 50,000 animals have been removed from the wild since 2018 and 3,200  have been temporarily sterilized. The BLM administers a drug that prevents pregnancy in mares for one to two years with control lasting up to six years through an annual booster. The birth-control program results in fewer animals on the landscape and less pressure on forage. Some pro-horse organizations say fertility control should be used more often for effective long-term herd stabilization, despite the limits of current fertilization control efforts.

Read Next: 49 Bison Culled from Yellowstone Herd—Far Less Than the Goal of 900

In 2021, the BLM corralled and removed 18,000 wild horses, which was 6,000 more than originally planned, due to drought conditions that increase the risk of dehydration and starvation for wildlife. Officials plan to remove up to 19,000 horses and burros in 2022 as drought conditions persist. The BLM will continue to collect and put up for adoption animals across 26.9 million acres of public land in 10 Western states.