On Making the Right Choices During a Dall Sheep Hunt 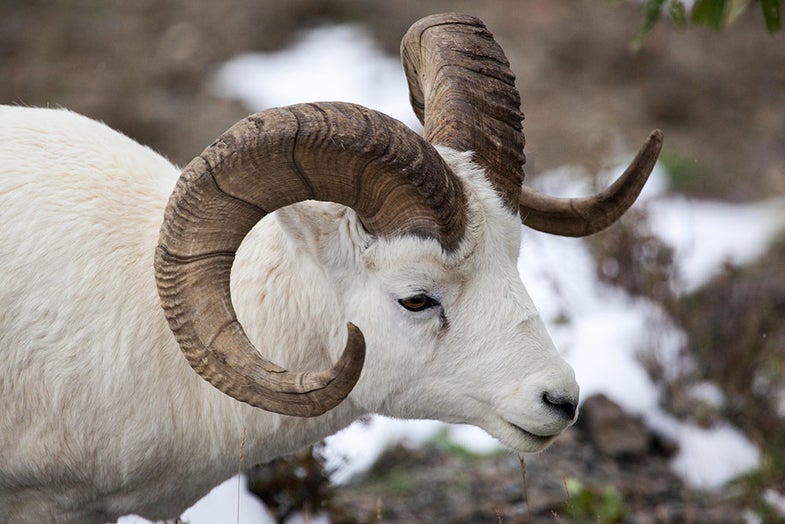 A great deal of the time I find myself writing about bad choices made by the feeble-witted, the futile, the f**ked up, the flaky, and the failed. That’s because not everyone is as bright as the regular readers of this blog.

So, today, it’s a pleasure to write about a friend of mine who made some right choices. By way of background, he’s in his 50s, probably pushing 60 pretty hard, and a Class III firearms dealer, who knows which end of a gun the bullet comes out of. He’s also an experienced hunter.

He drew a tag for a Dall sheep hunt in Alaska. The first decision he made was about his weight, because he was carrying a lot of it. A 10- or 12-day Dall hunt in Alaska is $20,000 or so, and for all that money you don’t want to be lying face down on the scree wondering if these are your last moments on Earth. He lost something like 30 pounds, and got in shape, and got the job done. And even so, he says it was a very hard hunt.

The second choice involved his rifle. He was having a special one built for the hunt, but it wasn’t ready, so he was left with two candidates: The first was a lightweight Savage 7mm/08 that shot into 3 to 4 inches at 100 yards. The second was another Savage that would shoot ½- to 1-inch groups, but weighed 9 pounds. Three to 4 inches means there’s something wrong with the rifle, so he made his second correct choice and went with the heavy, accurate gun. As I said in my previous post on rifle weight, if you’re in shape, it doesn’t mean all that much.

The third choice was an unusual one. He and the guide had spotted a ram, and to stalk it they had to climb the far side of an adjacent ridge. When they topped out, the two men put on white painters’ coveralls and starting crawling, thereby becoming sheep. The Dall bought into this until the men got within 200 yards, at which point the sheep became nervous and turned away from them preparatory to making an exit. The guide told my friend to shoot the ram in the ham, but my friend made his third correct choice and refused. He waited a minute—his fourth correct choice—and sure enough the ram made a quarter turn to the left, giving him a perfect broadside shot. The hunter fired and hit the ram behind the foreleg. The ram walked about 30 yards, wobbled, and fell.

I wasn’t there, and I don’t know exactly what was said, but shooting the ram in the ass would have been dead wrong. Deliberately wounding any animal, under any circumstances, is inexcusable. There is one possible exception: If an animal has already been wounded and is trying to escape, a shot in the root of the tail will keep him from going any farther. It won’t kill him, but you can walk up and finish the job. It’s an ugly thing to have to do, but it can save the creature a lot of suffering.

But as the first shot, never. I can only think that the outfitter was so desperate not to have the ram get away that he wanted it broken down, and hoped they could catch up and finish it.

Finally, one of the things you can count on in hunting big game is, if you don’t like the shot you presently have, wait 5 seconds. Animals don’t stand still. They’ll shift, or turn, or do something that will give you the shot you want. Wait for it. They will not disappoint you.