The Perplexing Plan to Dam the Pascagoula Tribs

A long time ago, I was visiting a buddy in a duck camp near Tunica, Mississippi, and was sitting at... 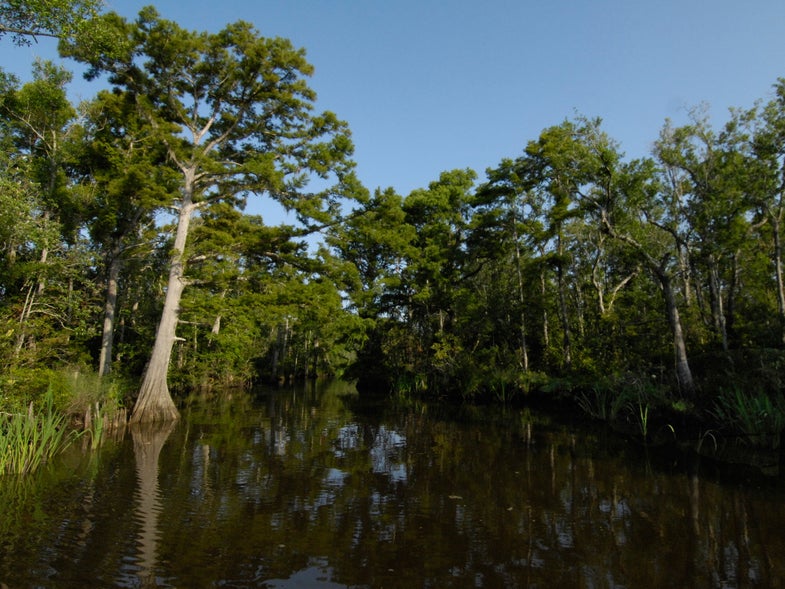 A long time ago, I was visiting a buddy in a duck camp near Tunica, Mississippi, and was sitting at the kitchen table listening to a conversation some younger hunters were having. The talk was of dogs, which drew me like a moth to a flame, and the talk was of breeding and training feists for squirrel hunting, which sounded to me (a lifelong squirrel hunter) like one of the high points of a sportsman’s existence.

(Apparently, a lot of Southerners, including my hero, the Alabama-born writer and evolutionary biologist E.O. Wilson, agree with the feist trainers: See “The Singing River, Rhythms of Nature” series of videos. )

Lately, I’ve been getting an earful about the Pascagoula River, even though I have yet to hunt those squirrels or run those little dogs there.

In 2016, the conservation group American Rivers listed the Pascagoula on its annual Twelve Most Endangered Rivers list. (Also on the list: the Apalachicola River, of which there is an old map on the wall above my writing desk, a souvenir of some of the best times of my life.)

The main threat to the Pascagoula River, according to American Rivers and a whole lot of other Pascagoula River users, is the Lake George Project—two proposed dams, one on Big Cedar Creek above its confluence with Little Cedar Creek, and one below. Both proposed dams are in George County, and will create two new lakes of 1100 acres (lower) and 1700 acres (upper). Boosters, such as the George County Board of Supervisors, say the dams, part of the Pascagoula River Drought Resiliency Project, are necessary to protect the main Pascagoula, and the industries downstream that depend on the river, from climate change-induced droughts.

Very few people in southern Mississippi will argue that there have not been an increasing number of droughts. The Pascagoula hit its lowest level in 64 years in 2000, and there have been five drought events since then.

But what many people in Mississippi do not understand is how, exactly, two new taxpayer-funded dams are going to put more water in the Pascagoula River.

“George County just wants a lake, and they’ve always wanted a lake, and they don’t care about anything else,” said Steve Shepard, a professional artist and representative of the Sierra Club from Gautier, Mississippi, who has lived on and fished the river his entire life (he still calls largemouth bass “green trout”). Shepard fiercely opposes the damming of Big and Little Cedar Creeks. “For the $100 million dollars they are talking about spending, they could go somewhere else, dig a 500-acre hole and build a recreational lake that people could enjoy, and do it without damming up these tributaries to what is designated as the largest free-flowing river left in the lower 48. I mean, come on, we’ve got this incredible system here, the original old canebrakes, this whole floodplain, this intact river and fishery. Why would anybody choose to mess with that?”

Shepard says that there is a groundswell of people, even in George County, who are joining what he calls the “No Fake Lakes” movement. “It is amazing how many people know what we’ve got here, even though you don’t see them until something like this comes up. I spent one year where I fished the river—just the river, nowhere else—several days every month, and I kept a journal. I was catching Gulf sturgeon, all kinds of different species, and I decided to share my catch information with the U.S. Fish and Wildlife Service. They sent a couple guys to go out with me, and they just kept saying, ‘Man, look at that! Look at this! This is a river!’”

Shepard notes that it seems strange to dam up tributaries to a river already suffering from low flows. “If we have a drought, then the drought will be affecting the lakes, too—they are in the same watershed. They are the watershed. So how will that add water to the river?” He says that using climate change as an excuse to create the lakes is ironic. “How many people who are demanding these dams even believe in climate change? And if they do, then they know that climate change also involves catastrophic flood events, so why are they proposing this very basic earthen dam?”

“Well, we do have a guy who works with us who doesn’t believe in climate change. He makes sure to call it ‘climate variability,'” said Jeff Ballwebber, an engineer and project manager with The Pickering Firm, of Jackson, Mississippi. Ballwebber was hired by The Pat Harrison Waterway District, a state agency created for flood control that supports the dam project. “Ten years ago, there was a proposal to expand the Strategic Petroleum Reserve, and they wanted to pull water from the Pascagoula River to dissolve some of these salt domes (see an explanation of the reserve here) and everybody and his brother came out against that plan. It was established that drought was a severe threat to the Pascagoula River system, and so we did the science on that, and did our best to come up with a plan to store additional water by catching the peak of the flood, and releasing it during droughts to restore water tables and the river.”

As for the climate change explanation, Ballwebber says that the science speaks for itself. “Looking at the hydrograph for the past ten years, it just seems like there is no normal flow now. It is either drought or flood. We have the gauging station at Merrill Bridge, just below the confluence of the Leaf and Chickasawhay rivers, and the minimum flow established there, to have a functioning river ecology and water supplies, is 917 cfs (cubic feet per second). If you look at the government statistics for climate change, projections are that the river will fall far below that in the future.”

Ballwebber says that he, also, is a serious hunter and fisherman, and he sees this project as a “net positive for the river and its ecosystem. We have wells for private homes and blueberry farms going dry, and we have people who’ve lived in George County all their lives who say that the base flows in the Pascagoula are just not there anymore. This is a way to address that.” (Here is a map of the proposed lakes.) From the very first proposal of a dam and a smaller lake over 15 years ago, one of the goals was to have a recreational lake, and that goal has not changed with the expanded concept, Ballwebber says. “The Board of Supervisors has been adamant that private property owners will keep their property, and do whatever they want with it,” he said. “Public access will be guaranteed, and there will be water parks on each lake, with boat ramps. The primary use of the reservoirs will be to maintain water levels in the Pascagoula, so recreational use will have to be compatible with that.”

The fight over the dams has just begun. A public meeting on the issue in 2015 broke down after a short bout of fisticuffs, though the conflict may not have been related strictly to the controversy over the dams. A more recent meeting was less eventful, but opposition seems to be gathering as well, some of it based simply on questions as to why the project is necessary. In a story about the scoping meeting published by WLOX, a local ABC News affiliate, some of the attendees seemed to have forgotten the climate change aspect of the project. “I’m all for it. It’s going to be great for development, for future expansion of homes, for industrial use,” Jackson County property owner Keith Ray said in the story.

The Jackson County Board of Supervisors has rescinded support for the project.

Mike McAdams of Pascagoula is a member of a local bass club and says he retired from a commercial roofing business “to duck hunt and fish the river.” In his 70 years here, he says he has seen huge changes on the Pascagoula. “I live a half mile from an estuary where, as kids, we’d take fly rods and catch bass, all the way down here at the mouth of the river. That’s all saltwater now, and the salt goes way up the river. We’re asking too much of it.” The idea of building new dams on the Pascagoula’s tributaries to address drought strikes McAdams as ridiculous. “That river has been here for eons and nobody ever worried about drought before. It’s all just a shame,” he says, “these big meetings, all this public input and this is what they come up with? I know progress changes everything. I got no problem with that. But keeping this river healthy should be a priority for all of us here. And these dams? They are not a part of that.”