Visiting with a dying parent, and finding solace in the outdoors 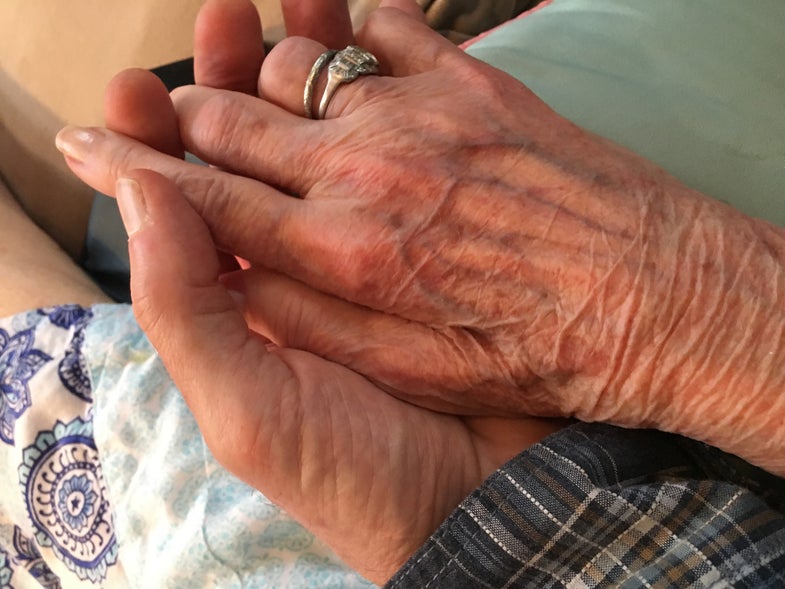 Mom is dying. Death comes to us all, of course, but has a terrible specificity when it knocks at your door. Mom is 90, has had a good life, is in hospice care at home, and will die with my sister, Liv, and me close at hand. That’s as good as it gets these days.

The body is stubborn. It gives up the habit of living reluctantly. Mom’s mouth hangs slack and open, her eyes roll up toward the ceiling. If she’s looking at anything, it’s something invisible to us. To me, her life appears to be over. Part of me wants to put her out of her misery, to end her suffering. But her body isn’t ready to give up yet. Which makes me wonder. Is it her suffering I want to end or my own? I figure her body gets to make that call.

My sister—who tends to her 18 to 20 hours a day, is a saint, and is at her wit’s end—says that when I’m alone with Mom, I need to be on the lookout for her choking. The muscles in her diaphragm spasm, which makes her panic, which makes them spasm worse. The morphine helps but isn’t foolproof. Should I notice her choking—it’s so subtle now that it’s easy to miss—I am to cup my hands and gently pound them up her back—left-right-left-right—as if working the stuck place up and away. I haven’t had to do this yet. I’m afraid to. I have no idea what to do if it doesn’t work. Liv has the most practice reading her mind and knowing what she wants. I’m afraid to be with her if Liv isn’t home.

Sometimes, Mom’s arm will rise as if she is trying to say something. Or maybe she just can’t control her arm. Or maybe she is renouncing her earthly throne. She moans. Sometimes, Liv says, the moans mean something, pain or a desire to change positions. Sometimes they’re just random sounds, Liv says. Stray voltage.

Mostly, I sit by her bed and hold her hand, trying to warm it with mine. Often now, mine doesn’t have much warmth either. I whisper in her ear that she has been a wonderful mother, that I love her, that I’m so sorry she has to go through this. I say how much I’m going to miss her, that I don’t know what I’m going to do without her. And as soon as I start to whisper any of this, my voice cracks and I cry. But I make myself keep going because I need to say these things. I need her to hear them. I have to trust that at some level she knows it’s me, her son. She must. What we think of as “consciousness” is likely just one particular wavelength of what may be infinite levels of consciousness.

It was unseasonably warm the other day, nearly 60 and overcast, with reports of locally heavy rains that never arrived. Around 4, I took a break and went down to the C&O Canal for a walk. I needed to be near the river. I stopped to put my hand on some of the huge, ancient sycamores that lean out over the water. I looked up at them. I’ve always felt an affinity for these ungainly trees with their mottled bark: white, gray, and brown. They have irregular crowns, seldom grow straight, and often have multiple trunks. They are large, lumberingly awkward, and beautiful. As night falls, sycamores as the last trees to be taken by the darkness.

The trees can reach heights of 130 feet—I believe some growing in the rich soil along the river attain nearly that height—diameters of 10 feet, and live for 250 years or more. In 1744, a Shenandoah Valley settler named Joseph Hampton and his two sons lived for most of the year in a hollow sycamore in what is now Clarke County, Va. In 1770, George Washington measured one that had a diameter of 13 feet and a circumference of nearly 45 feet 3 feet above the ground. Botanists think such trees may have been 600 years old. The old giants are gone now.

Every tree along the river falls one day, often during the scouring of a spring flood, and is washed downstream. But new ones take their place as they have for eons. As I left the towpath, I stopped to look back. It was nearly dark, but there were still a few ghostly white trunks almost glowing in the darkness. This is the world, I thought, with all its wonder and terror, its living and dying. I love you, Mom.