Twenty-one functions—and a few the designers never dreamed of 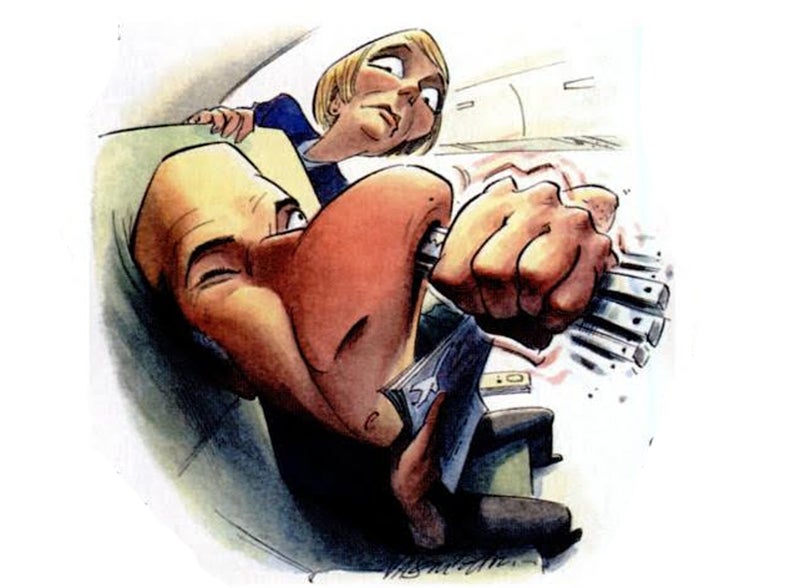 A classic story from the F&S archives.. Dan Vasconcellos
SHARE

Editor’s Note: This classic “Sportman’s Life” column first ran in the Jan. 2001 issue. This is the first time it has appeared online.

If you’ve been on an airplane recently, you’ve noticed the following phenomenon: The moment the announcement starts that it’s okay to use portable electronic devices, nearly every person over the age of 8 simultaneously opens a laptop computer and disappears into it. Me, I reach for my new portable amusement park, my multitool.

Mine is a 21-function Schrade Tough Tool, designed for a lifetime of faithful service. The warranty says you’re not supposed to throw it, use the blade as a screwdriver, or try to hammer things with it. Other than that, you’re pretty much on your own. I open and close it about 50 times, watching it do multitool jumping jacks and transform itself from a small hunk of stainless steel into an instrument of awesome capability. This alone is pretty entertaining. My only regret is that at the moment, I have no cans to open, wires to strip, or anything in immediate need of sawing, scraping, filing, measuring, scribing, or disgorging. A multitool fairly radiates purpose, and it seems a shame not to be able to help it realize its full potential. I do use the Phillips head to tighten a loose screw in the Airfone in the seat back in front of me, prompting the guy ahead to turn around and glare.

With nothing mechanical in need of fixing, I turn to my personal appearance. Very discreetly, I shield my face with the airline magazine and go after a stray nose hair with the needle-nose pliers. At the exact moment I’m about to pull, the flight attendant’s quizzical face appears about a foot above me. This startles me so much that I yank much harder than I meant to on the tool, which by this time is attached to much more real estate than I had planned. I basically clear-cut an entire forest of nasal hairs at once, which causes tears to well up in my eyes in great abundance. Flight attendants witness so many strange things that it’s hard to know where the sight of a man with an 8-inch multitool halfway up his nose ranks on the Weird-O-Meter.

“Something to drink?” she asks, recovering nicely.

Half an hour later, having learned nothing from the experience, I’m at it again. A manicure this time. I use the fine flathead for a first pass under my nails and the leather bore to get those hard-to-reach places. So far, so good. The large locking flathead is just the thing for an initial assault on the cuticles, followed by the scraping blade to clean up the rough parts left behind. This is actually going quite well. But we hit an air pocket or something just as I am applying pressure, and the scraping blade bites into my thumb. Like everything else on a multitool, it’s sharper than it seems at first. I stick my thumb in my mouth to stop the bleeding, then figure that my rum and Coke is a better alternative. The alcohol will kill germs, and the ice will shrink the busted capillaries.

Anybody with an ounce of sense would have stopped there, but it was a long flight. Unfortunately, multitools have no specific implement for hangnails. So I choose to use the serrated portion of the knife blade at a 90-degree angle to the hangnails—for safety—and sort of abrade them off. This appears to work pretty well, and I’m on my third one when the guy playing Slave Zero next to me attempts a particularly fast evasive move and bumps my elbow. I now have wounds in nose, thumb, and ring finger.

At this point, some slight change in cabin pressure sets all three of my cuts bleeding. I go back to the bathroom and wrap my injured digits in toilet paper and pack my nostril with more toilet paper to staunch the flow. After the plane lands, I work my way down the aisle, multitool in its holster, me swathed in toilet tissue, looking like a mummy that’s been in a fight. At the door is the attendant who was working the beverage cart.

“Bye-bye, now, sir,” she says. Then she takes my arm and whispers, “The gate agent outside can direct you to the nearest medical station.”