How to Find Deer in Bad Winter Weather 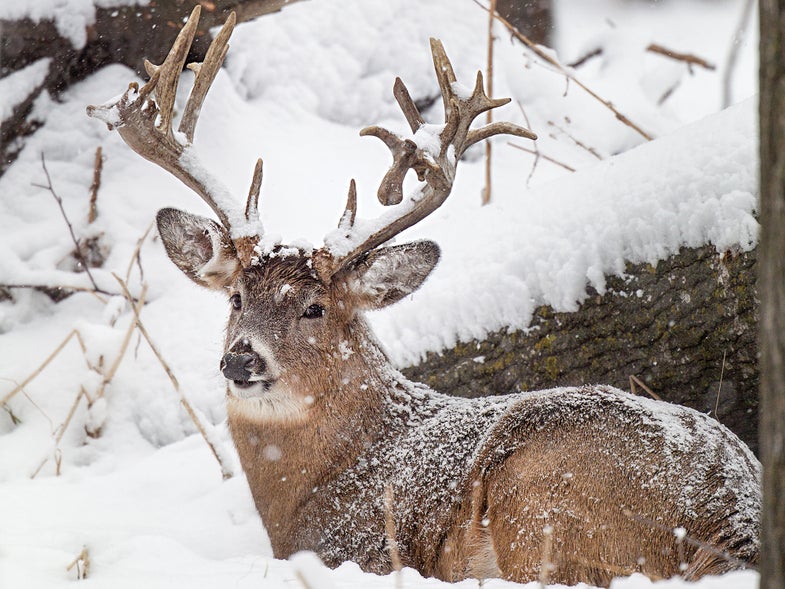 It’s no secret that food sources can be hotspots right after a snowstorm. But dealing with the varied weather extremes Mother Nature can dish out during the tag end of the season can be a lot more complicated.

If you’ve booked time off or only have weekends free, you can’t wait for perfect weather. You need to adapt both where you hunt and your strategy to whitetails’ weather-influenced movement patterns. Here’s a guide to hunting tactics for eight extreme late-season weather conditions.

You have three options here:

• Hunt before it hits. Deer know when storms are coming, and they feed heavily six to 18 hours before heavy snows set in. Leave work early, take a day off, call in sick—do whatever it takes to be on a current food source before the storm hits. Orchards, food plots, oak flats that still have acorns, and fields of soybean, wheat, and radish can all be productive pre-storm stakeouts. In high-pressure areas, check out secondary foods like raspberry, honeysuckle, greenbrier, and plum thickets.

• Hunt mid-storm. Put on tall boots or gaiters, wool, and waterproof outer clothing. Look for bucks hunkered down in sheltered areas, such as conifer thickets, brush, and blowdowns. Pinpoint this cover on the lee side of mountains and hills, on benches, or even in valleys where deer can find some escape from the worst of the storm. Still-hunt carefully along the edges.

• Hunt post-storm. Find the best remaining food sources and take a stand downwind. Deer will be moving. They have to be—survival demands they get food after being holed up, sometimes for days.

These can be even worse for deer than snow because the precipitation penetrates their coats instead of building up an insulating cover on it. Bucks seldom move well just before ice events, as these typically follow low-barometer periods (which are poor for movement) and often start as cold, chilling rain.

Focus on the same spots outlined above for snowstorms. Finding evergreens is vital for deer now, since deciduous trees and brush offer virtually no protection.

Bucks will be concentrated, so drive 1- to 5-acre pockets of evergreens. Have two flankers work the outer edge slightly ahead of a single hunter who zigzags up the middle of the conifers. Post other hunters at the end, or along ditches and side strips of cover that offer escape routes.

Bucks move well in light snow, often seeking a late-cycling doe or a bite of oats before the crop is buried. That sets up one of the most exciting hunting tactics of winter: tracking. You can’t try this on your favorite hundred-acre parcel. Locate a large, isolated tract of public land and hike in a mile or more. Try to strike a trail along a ridge spine, brushy creek, or bench with greenbrier, brambles, and plums. Search for a single large set of tracks, then dog them. As you move, try to predict the buck’s route and loop ahead when feasible.

Deer will escape the brunt of chilling breezes by heading to the lee side of hills and ridges, benches below peaks, hollows, and stream bottoms. Still-hunting these protected areas into the wind or crosswind is deadly now.

To soak in the sun’s warmth, bucks seek south- and southwest-facing hillsides and benches with mostly deciduous trees that let rays through. Stands of warm-season grasses also draw deer because they can remain hidden in the grasses, but the sun can penetrate and warm them. Take a stand and watch for deer entering these areas at dawn to bed, or exiting them in late afternoon to feed.

With heavy cloud cover, bucks will head to young evergreen thickets, especially those with shrubs, brambles, and other secondary foods. The conifers provide extra wind protection and can be warmer than more open areas. Try a two-man still-hunt through these small cover patches with one person working 50 to 75 yards downwind of the lead hunter to catch circling bumped bucks.

Deer hate fog because it makes them feel vulnerable. But they’re hungry when it lifts. Be there waiting for them at corn, soybean, oat, or turnip fields, flats with remaining acorns, or late-dropping persimmon stands.

Bucks have heavy coats now and move at dusk or dawn, if at all, during a winter heat wave, staying on cooler ridges and shady conifers. When they do stir, it’s often to reach a secluded water source. Find one with fresh sign and stake it out until midmorning, then still-hunt breezy ridges and evergreen groves.