All hunters have their favorite spot. For the author, his just happens to be a magnet for migrating ­tundra swans 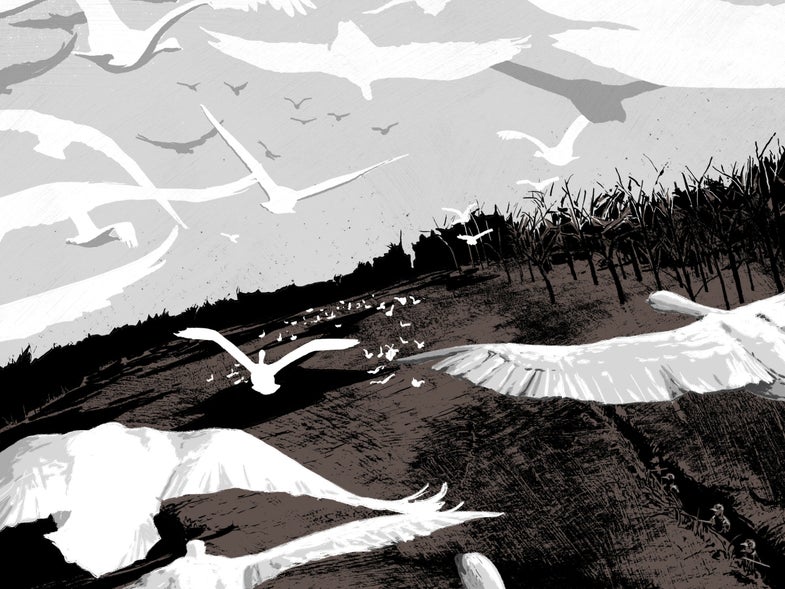 An ordinary spot—nothing more than a ditch and some weeds—delivers an extraordinary swan hunt.. Pat Kinsella
SHARE

The swans come from the east, out of the sun, looping downwind over the field. “Birds, birds,” someone whispers from up the ditch, and we lean into the leftover weeds and willow scrub that screen the rim of the drain. Young wheat forms a patchy green skim on the ground, the only color in an otherwise dull winter world of old brown mud, dead grass, and leafless woods. It’s hard to describe the hold this place has on me.

The swans bank north a hundred yards away, ragged lines of pearls against the blue sky. Five of us press our bodies into the near-horizontal bank of the ditch, and barely risk a peek from under our hat brims. They are so close. Already, 20 swans have lit in the decoys. We hunted this ditch last year, the year before that, and the year before that. It’s like this every year. Though there are fields just like this one unfurled in every direction, tundra swans from the Arctic North seem to be drawn to this one piece of muck by some immutable compulsion.

These birds are on a string, now, sucked into the open field, their landing options limited by a scattered spread of 200 decoys and the live birds already on the ground. “Who’s up?” someone whispers. We take turns, shooting one bird at a time, picking singles out of the squadrons overhead. Swan hunting in North Carolina is by public draw, with a one-bird limit, and we’re in no rush.

“That’s me,” I reply. I free my right foot from the muck, and press my left knee deeply into the mud bank of the ditch. I’ll need the leverage when I come up shooting.

My guess is that you’ve driven by this ditch a hundred times. Well, maybe not my ditch—not the Ditch—but places very similar. Your ditch might be some 100-yard-long shelterbelt in South Dakota or a Shenandoah hayfield or a riverbottom where an old box blind has stood for years. Your ditch might be even less impressive than mine. But we all have those ordinary places where we’ve experienced uncommon moments of meaning and substance, some shared by longtime field companions, others where we alone are witnesses. I have my favorite honey holes that consistently produce ducks, deer, or squirrels, but there are certain places I return to year after year because of their emotional weight: the beaver slough where Jack shot his first duck; the oak flat where Markie helped me drag an 8-pointer out of the woods; that subtle little knuckle of woods where I first saw two bucks sparring. No one else on earth might find these places remarkable at all. I could never forget them.

This ditch is a case in point. I don’t even know the landowner. He’s the friend-of-a-friend-of-a-friend. But this land has nourished his own family for generations, and he’s happy to pass that blessing along each year when we show up to crash the farm’s late-winter swan rodeo. It’s this way across the country: Farmers and landowners have no idea that their ditches, scraggly hay bales, and woods corners help produce the kind of moments that endure. We knock on doors and ask for permission, and then we stack up memories we will recall on our deathbeds.

In the muddy ditch, we watch the Arctic blanket our world. A mature tundra swan is clad in a thousand shades of white. The birds are so big, so exotic, and so willing to decoy that the temptation is always there to let the birds land, see how close you can get, even if you never fire a shot. Now the swans are lined up as far as we can see: swans in the field, swans in the air with wings set, groups of swans circling overhead waiting their turn, lines of swans in the sky all the way to the horizon. Up to 75,000 tundra swans spend the winter within a two-hour drive of this ditch, three-quarters of the entire population that migrates through eastern America. There are times when it seems as if most of them are overhead.

The flock’s bugling whoops echo off the field’s sheet water, and I settle on my bird, focusing on a single mature swan on the left side of a flapping line, white as snow, off on its own by a yard or two. The 20-pound bird drops with a ferocious thud as the swans on the ground explode into the air. It’s not a challenging shot. It’s hardly a difficult hunt, but to be honest, I come for what happens next.

I stand in the ditch, the reeds pulled close to my face, for an hour longer, as hundreds more swirl overhead, sifting down toward the field, and landing just beyond the ditch. There is nothing to prevent me from waking up at 3 a.m., driving two hours from home, setting out decoys in the dark, and standing in the half-­frozen water of an unremarkable ditch, just to watch such a spectacle. But I won’t. Not without a gun. Nobody does. The cost of admission to witnessing such extraordinary life so close and breathless and wild lies in the stilled form of the huge bird at my feet.

Down the ditch someone calls out: “Who’s up?”

More are coming. Always coming. Their cries are deafening. I hear them all year long.

TIP OF THE MONTH: Make Room for More

Here’s how to find room in an overstuffed game freezer for a limit of bulky late-season swan and goose fillets: “Flash-freeze” the breasts in your regular freezer first. Coat a baking sheet with nonstick cooking spray and spread the fillets directly on the sheet. Place in a freezer overnight. The next morning, vacuum-pack the meat, and you can shove the frozen breasts into what few nooks and crannies remain amid your hunting bounty. —T.E.N.

This article appears in the Dec./Jan. 2017 issue of Field & Stream with the headline “The Ditch.”