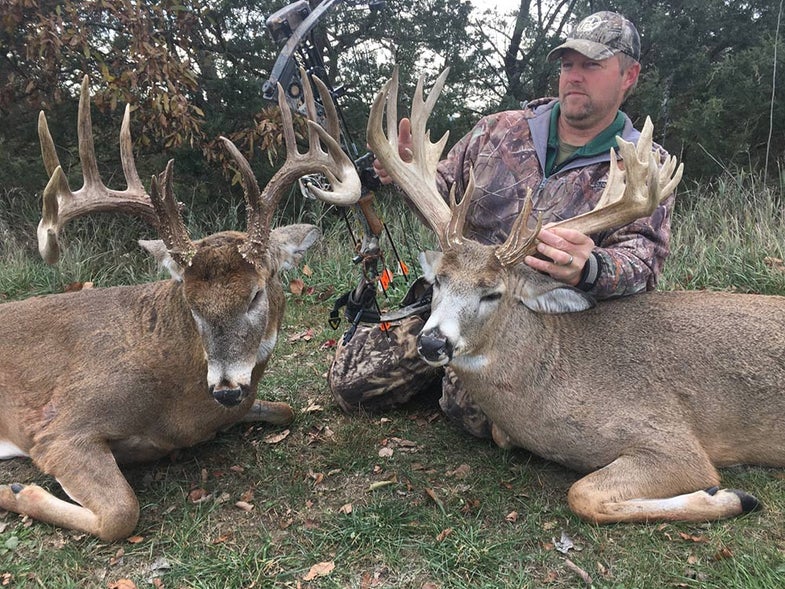 Earlier this year, we covered the incredible story of Illinois bowhunter Don Higgins, who killed two world-class whitetails in a one-week span. Less than a month later, Iowa hunter Steve Snow accomplished an equally amazing double, arrowing the two Hawkeye State studs pictured above. Although the B&C scores of Snow’s bucks don’t quite equal those of Higgins’, Snow killed his pair of monsters from a single stand, on the same hunt. Here’s his story.

Snow’s main focus this season centered on a huge whitetail he’d watched for several years. “I first got pictures of this buck in the summer of 2015, and in the fall he walked by my stand at 20 yards,” he says. “He was a main-frame 6×7 that didn’t have great tine length, but I put him at only 3-½ years old. I figured with all those tines at that age, he could push 200 inches in a couple of seasons. So I passed the shot.”

“During the fall of 2016, I was chasing a huge 8-point, so I didn’t really hunt much where the 6×7 was hanging out,” Snow says. “But the pics I got of him were impressive; although he hadn’t gained much height, he’d put on a bunch of mass. My neighbor, who had pics of this buck and another nice non-typical, put all his effort into killing the 6×7. But by the end of that season, both bucks were still alive.”

When Snow started getting pics of the 6X7 in 2017, it was clear that the buck still hadn’t gained much in tine length but had put on even more mass. “He was a great mature buck, and I thought he was as good as he was going to get,” Snow says. “So I decided if I had a chance, I’d try to take him.”

Meanwhile, Snow was getting occasional pics of the big non-typical that his neighbor had also been eyeing. “The non-typ was more of a ghost for me,” Snow says. “I’d get a pic or two of him in the summer, and a few in early fall, before our bow season opened. But I didn’t feel like I had much of a chance of seeing, much less killing, him.”

On the afternoon of Nov 9, Snow was driving around on his farm and paused where he could glass a secluded food plot. “You can barely see it from the road,” he says. “But there’s a brushy bedding area—a 40-acre chunk of nastiness that I never go into—right next to the plot. I was glassing that and could see a big deer in there, and the flash of sun on antlers. So I grabbed my bow and snuck to the stand I have near that plot. I’d just climbed in when I looked up and there was the 6X7, walking through the plot only 25 yards away—and my bow was still on the ground! I watched him walk off and just kicked myself.”

With several hours of daylight left, Snow decided to settle in and wait. “I got my bow up in the tree, got my gear together, and plunked down in the seat,” he says. “I didn’t have long to wait, and a group of does walked into the food plot and started working my way. One of the big does looked back toward the timber and when I followed her gaze I saw the big non-typ walking into the food plot. Even though I had pictures of the two big bucks hanging out together in the same area before, I still couldn’t believe it.”

Snow watched the does feed toward, and eventually right under, his stand. “I knew one of them was going to catch my scent or see me and spook,” he says. “And I figured once that happened it would be all over. The does did get me, but they left without blowing. When I looked back at the non-typ, he was standing broadside and within bow range. I drew, settled in, and took the shot. I saw the arrow hit a little farther back than I wanted, but the buck headed into a patch of timber I knew well. I knew if I didn’t bump him out, he’d be lying dead there in the morning. So I decided to just sit there until dark, then slip out to the truck.”

Iowa landowners are allowed to buy an either-sex landowner tag in addition to the regular archery deer license, so Snow was allowed to shoot two bucks with his bow in a single season. But filling a second tag was the furthest thing from his mind that afternoon. “I was just sitting there, soaking it all in,” he says. “I didn’t even feel like I was hunting; I was just biding time until dark. All of a sudden, I looked up and the 6X7 was walking into the plot. I grabbed my bow and had to get an arrow out of my quiver. Fortunately I got everything lined up in time to make a perfect shot, and I watched him pile up just as he got off the plot.”

When dark came Snow made the easy retrieval of the 6X7 buck, but stuck with his plan to give the non-typical overnight before the recovery. Of course he had plenty of antler to gawk at in the meantime. The heavy typical grossed 177-4/8” B&C.

The next morning, Snow went to search for the nontypical. “When I walked into that patch of timber in the morning I saw where he’d bedded once, then got up and moved just a little ways, and that’s where I found him,” Snow says. The heavy-beamed buck grossed 196-⅞” B&C.

Snow has killed some fantastic bucks with his bow, including a nontypical that grosses over 200 inches. But he never dreamed of killing two giants on one evening. “I’m blessed to live in some great whitetail country,” he says. “But it’s still a pretty tough challenge to get within bow range of a mature whitetail, even here. I love the chess game of getting close to one of these amazing animals on their terms. To do that with one buck is pretty incredible, but two huge bucks on the same hunt? Well, I don’t even know how to describe it.”