The outstanding example of cowboy marksmanship, or lack thereof 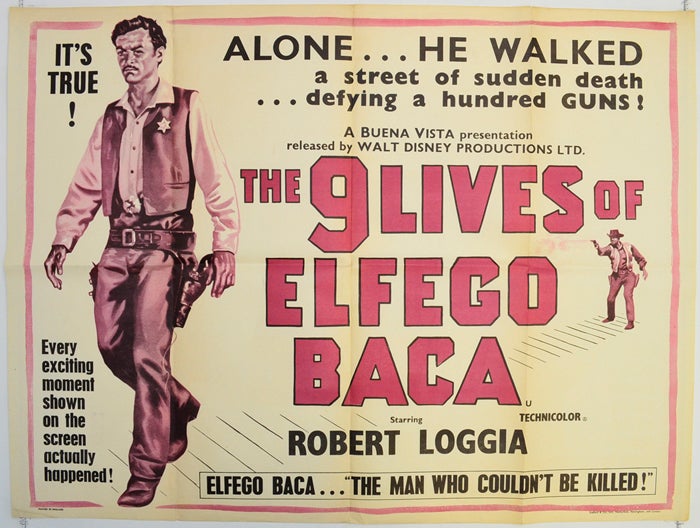 Disney made a movie about Baca's feat. PastPosters.com
SHARE

Growing up as I did in the heyday of TV and movie westerns, one of the things I and my fellow urchins were led to believe was that cowboys were dead shots, and that cowboy heroes shot bad guys in the shoulder, or shot the guns out of their hands, so proficient were they with a Peacemaker.

Some professional gunfighters were extremely skilled. James Butler Hickok was probably the best. But in the whole brief history of the wild, wild West, there’s not one recorded instance of a top-ranked gunman going up against an equally skilled opponent. Neither man would have survived.

The outstanding example of cowboy marksmanship, lack of, took place at Frisco, New Mexico, on October 28th, 1884. (And to say that there is much disagreement about the facts is to understate the case, but here goes.) One Elfego Baca, who was born in New Mexico, the son of a marshal, was 19 years old, and a very hard case even for that time and place. He may or may not have been a legally sworn deputy sheriff, but he did carry a badge.

The fun started when Baca tried to arrest a Texas cowboy named Charlie McCarty for firing his revolver in a saloon. McCarty took this poorly; he shot the hat off Baca’s head and rode off. Baca, not going along with the spirit of the thing, assembled a posse, caught McCarty, brought him back to Frisco, and locked him up.

At this point things really get confused but the following did happen in some order or other:

McCarty’s friends, lots of them, showed up and demanded his release. McCarty then grabbed a gun and shot at Baca again, but didn’t even get his hat this time. (McCarty was eventually given a small fine and warned to be more careful.)

A general gunfight ensued in which the posse decided it had pressing business elsewhere, and the horse of ranch foreman Young Parham, was shot. Said horse fell on Parham, crushing him, and Parham died the next day. Baca took shelter in a jacale, which I believe is an adobe hut. This particular one had a sunken floor, which would save Baca’s life.

By this time, the word had gone out to all neighboring ranches that cowboy honor was threatened, and to come to town and shoot this uppity deputy. So, depending on who you believe, anywhere between 20 and 80 cowboys surrounded the jacale and, over the next 33 hours, fired something like 4,000 rounds into it. According to Baca, there were 367 holes in the door alone, and a broom, standing in a corner, had eight holes in the handle.

Baca lay on the sunken floor as the barrage crackled over his head. He himself was able to do very little shooting, but he did manage to kill one man and wound another. Finally, the cowboys, who were hung over, out of ammunition, and deafened, persuaded Baca to surrender. He agreed on the condition that he keep his guns, and he did.

They all rode off to court where he was found innocent of all charges.

The story does not end happily. Baca became a lawyer, and specialized in defending accused murderers. He claimed to have saved 29 of 30 from the gallows over his career, and there’s a story that he once received a telegram that said “Am accused of murder. Need you immediately.” Baca’s reply was supposedly, “On my way with three eye witnesses.”

The details are shaky, but the fact remains that Baca was an extremely brave and cool-headed guy, and that the cowboys were stupendously bad shots. I have a mental image of a cowhand like Slim Pickens in Blazing Saddles yelling, “Somebody ride back to the ranch and get a sh*tload of ammunition.”