For the past century, elk have been relegated to a relatively small portion of Minnesota, but there was a time... 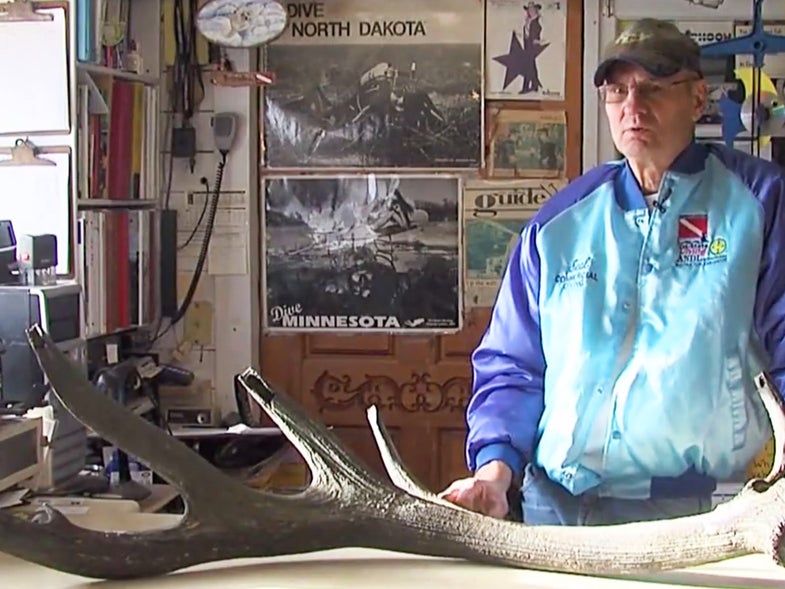 For the past century, elk have been relegated to a relatively small portion of Minnesota, but there was a time when they ranged across much of the state. Tangible evidence of their once-widespread existence shows up from time to time—sometimes at the bottom of lakes. The most recent example? A diver’s discovery of a massive antler at the bottom of Buffalo Lake. Recently completed carbon-dating indicates that there’s a 70-percent chance that the antler fell in the lake sometime between 1440 and 1532, the Duluth News Tribune reports.

Diver Gary Thompson found the antler, which measured about 5 feet long and weighed roughly 30 pounds, in August. “I came across it, and it looked like a big root to start with,” Thompson told the Forum of Fargo-Moorhead. Once the antler was out of the water and in the boat, Thompson was awestruck by its size.

Thompson wanted to find out the age of the antlers, in part because elk hadn’t been in that area of northern Minnesota for more than 100 years. Little did he know that the antler would be nearly 500 years old, dating back to the time of Christopher Columbus, Ivan the Great, and Michelangelo.

This is not the first time old antlers have been found on the bottom of a Minnesota lake. The Alexandria Echo Press reports that in 2007 a scuba diver discovered a set of antlers in more than 100 feet of water in Lake Carlos, likely a result of the elk having fallen through the ice. Upon inspecting the antlers, the Science Museum of Minnesota estimated that the rack was 2,000 to 12,000 years old.

Even today, it’s not unheard of for elk to fall through the ice. According to the Oregonian, a herd of 41 elk fell through the ice and died last December in Oregon. Maybe their antlers will be discovered in another 500 years or so.