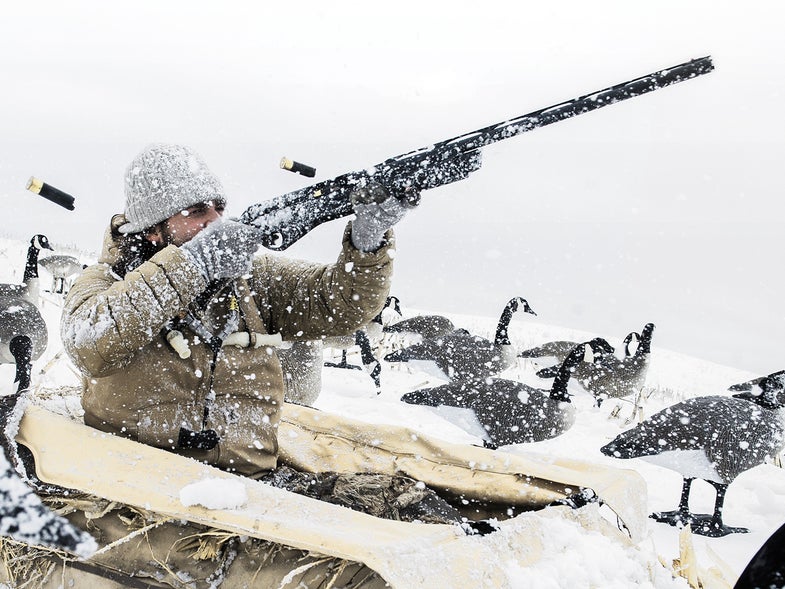 In a mad race against shooting light, Travis Mueller picked me up from the airport already dressed in camo. “Let’s go,” he told me. “The geese are moving.” He strangled the steering wheel. When his eyes weren’t on the road, they peered through the peak of the windshield, monitoring the gray sky for black, honking lines.

We drove to my motel, where I made a Clark Kent–fast costume change into my own camo, then I was back in the truck with Mueller, my guide, fighting traffic in Cedar Rapids, Iowa, on our way to the blinds. “We’re gonna kill three limits,” he said. “I know it.”

Mueller had set decoys in a cut cornfield just off the town’s main drag, and Cale Cannoy, a buddy of his, was already tucked inside one of the layout blinds. Just as we turned off the road and onto the field, a quartet of Canadas glided toward the spread. Mueller killed the engine, and we waited. “Just watch,” he said. “Any second now.” Bangbangbang. Two geese caved. Mueller and I jumped out of the truck and raced toward the blinds.

Mueller was right: We killed our limits, and with legal light to spare. Right after we met Cannoy at the spread, a flock of 10 geese appeared about a half mile away, and we hurried into the blinds. Mueller called, while Cannoy worked the flag. The way the flock reacted to the flag, it was as if we had flipped the bird to a gang of Hells Angels on the highway: Just like that, they came after us—and they couldn’t be stopped. “We got ’em,” Mueller said.

The birds flew high over the spread and over the fenceline against which we’d set our blinds. They circled back, coming in to land. An order erupted from Mueller’s blind: “Kill ’em!”

I connected on my first shot but missed two follow-ups. Cannoy killed one, filling his three-bird limit, and Mueller dropped two. We crawled out of the blinds and traded fist bumps while Mueller’s Lab, Buoy, retrieved the birds. In another 30 minutes, the hunt would be over.

“Quite the baptism we just gave ­Colin!” Mueller said.

Later that night, after we’d picked up the decoy spread, I took the largest of my three geese and plucked it whole. I had special plans for that goose.

Word had spread about last night’s success, and on day two our group increased by two hunters, including F&S shotguns editor Phil Bourjaily, who lives nearby in Iowa City. The forecast called for strong winds and overcast skies. The wind we got; the cloud coverage, not so much. From the minute we set the spread and brushed the blinds, it was bright and sunny, which didn’t bode well for seeing many geese. In the warmth of the sunshine, Mueller said, the birds can afford to be lazy. Their metabolism doesn’t burn as much as it does in cold, overcast conditions, so they don’t need to fly for food. As he put it: “They’re not in survival mode.”

The five of us sat in the blinds for hours that morning without seeing one goose. Then the temperature dropped 5 degrees, and it got pretty cold sitting there with nothing to flag, call, or shoot. Mueller suggested we take a break and come back later in the afternoon. “The birds should be moving then,” he said.

The geese did move in the afternoon—just nowhere near our blinds. By the time legal light had come and gone, no one had fired a single shot.

Mueller picked a new field for our last hunt. There were tons of birds in the area, a chill in the air, and clouds in the sky. As Cannoy and I finished setting the decoy spread, a big flock flew over us. “This could be really good,” he said. And it would’ve been—had the sky not immediately cleared and brightened the moment we crawled into our blinds. The sun beamed on us—and on the birds nearby, which could now afford to loaf. I kept checking my watch, knowing that we could hunt till 4:38 p.m. For a while there, time dragged.

4:32 A flock to our right was coming our way. Cannoy called, and they circled us but never came low enough to shoot. I looked up from my blind: Geese gridlocked the sky. Maybe this’ll happen after all, I thought.

4:37 Bourjaily spotted a flock coming from the left. “Get down,” he said. “We still have time.” We waited for Bourjaily’s call. “Kill ’em!”

4:38 Bad words were spoken, followed by silent disbelief. We missed every goose. The clock had run out.

4:39 It’s tough to accept botching the chance at a big finish, but as we picked up the spread, my thoughts kept going back to the first night’s hunt instead of dwelling on today’s slow shoot. It had been an unforgettable trip. And tomorrow I’d fly home to spend the holidays with family—my luggage heavy with one plucked Christmas goose.