A low ceiling at Portland’s Mechanics Hall still shows the scars where soldiers scraped the tips of their bayonet scabbards, on their way to war 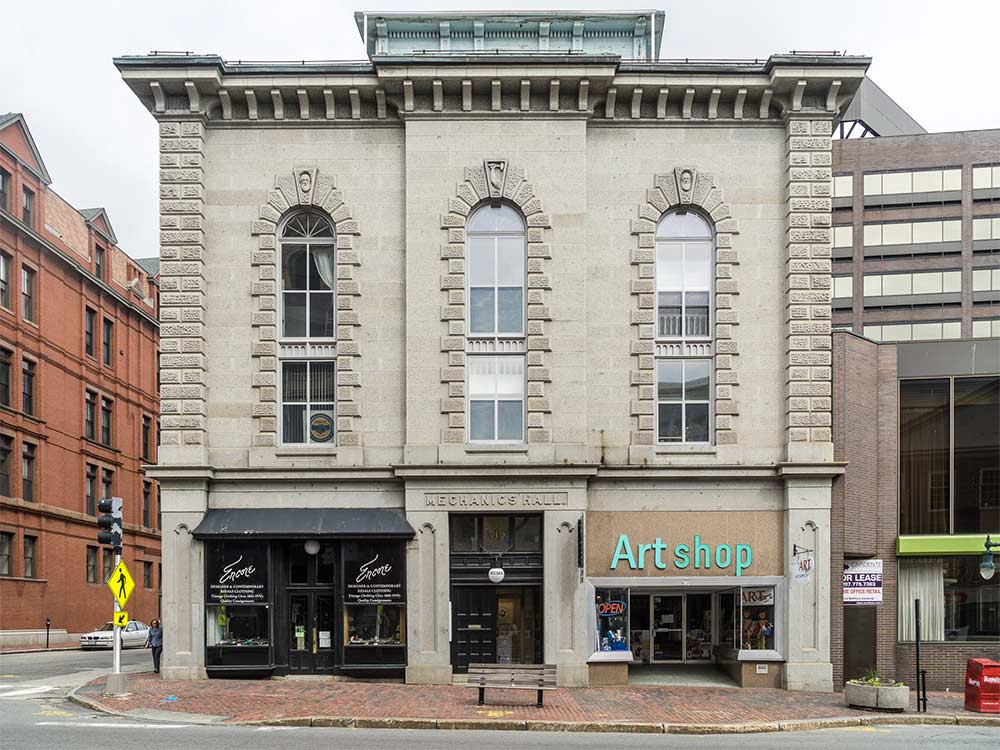 Through obscure circumstances, I found myself taking a tour of Mechanics Hall in Portland, Maine. It was built between 1857 and 1859, and at the time was one of hundreds of such halls throughout the United Sates. “Mechanics” meant people whose trade involved tools. They formed associations, and built halls, and today there are only four of these buildings left in the United States.

The Portland hall has been renovated over the years, except for the top floor, which was a dining hall, and that remains unchanged from 160 years ago. During the Civil War, Portland was the major terminal for Maine soldiers who were being fed into the meat grinder, and the dining hall was converted to feed them before they got on ships and trains. It stayed open seven days a week from Ft. Sumter to Appomattox.

Today, if you climb the stairs to the third floor, you get to walk on the very same floorboards as Joshua Lawrence Chamberlain, O.O. Howard, Ellis Spear, Atherton Clark, Andrew Tozier, and thousands of others who marched off in blue uniforms.

Of the states of the Union, Maine sent a higher percentage of its population to battle than any other. Out of 600,000 people, 80,000 served. Of this number, 3,184 were killed in battle and 5,257 died from disease. Cholera, dysentery, measles, malaria, yellow fever, septicemia, and pneumonia were more lethal than Minie balls. The farm boys who had never lived anywhere else had no immunity to anything, and as the historian Bruce Catton wrote, it was dangerous simply to be in the Army.

Yet they joined up in droves, some to stamp out slavery, probably more for adventure. To a youngster whose life would otherwise consist of unbroken labor behind a mule or in a sawmill or at the oars of a dory, the chance to put on a uniform, parade to cheers, and go see the elephant (which was how they put it) was irresistible.

As you enter the dining hall, there’s a low stretch of ceiling that is scarred and crosshatched with grooves and pockmarks. These are called “Enfield tracks” (why not “Springfield tracks” I have no clue) and were made by the tips of bayonet scabbards. My guess is that the new soldiers paraded through Portland, bayonets fixed but scabbards on, and climbed the stairs at Sling Arms. No doubt the taller soldiers scraped their scabbards along the ceiling, or poked them into the wood.

Ironically, the bayonets would be mostly for show. Both the Enfield and Springfield Rifle Muskets used ring bayonets with triangular blades that very few had the stomach to use except in the most desperate fights. Only about 1 percent of all Civil War casualties were caused by them. Confederate soldiers used their bayonets to cook “sloosh,” a mixture of cornmeal and grease that was made into dough, then wrapped around the blade and held over a fire.

So there the Enfield tracks remain, a small, sad memorial to young men who went to war first as idealists and then as soldiers with no illusions and no faith in their generals but undiminished belief in themselves. May they rest in peace.

I don’t think we produce such people today.