Attorneys for the Pebble Limited Partnership recently announced that the company is nearing a settlement with the Environmental Protection Agency... 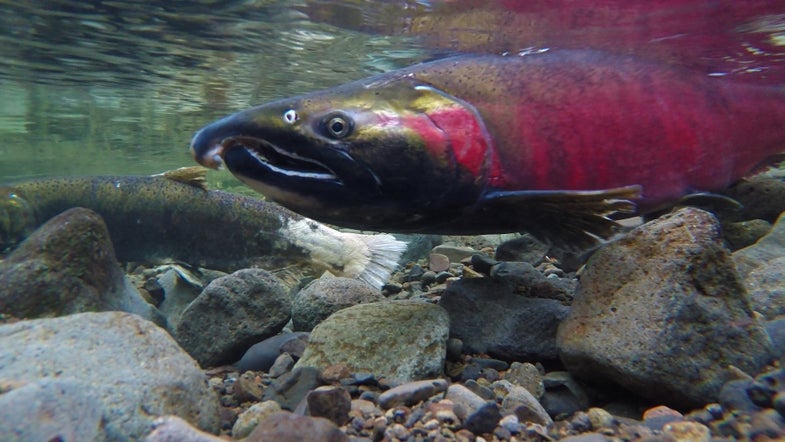 A sockeye swims upriver to spawn. Bristol Bay, the approximate location of the proposed mine, is home to one of the world's largest sockeye salmon spawning runs. Courtesy BLM/Flickr
SHARE

Attorneys for the Pebble Limited Partnership recently announced that the company is nearing a settlement with the Environmental Protection Agency for the construction of a mining operation near Alaska’s famed Bristol Bay, one of the world’s largest salmon fisheries.

According to E&E News, the E.P.A and Pebble attorneys stated in a joint motion filed in Alaska’s U.S. District Court last week that they have “a likely framework for settlement,” and asked a federal judge for an additional week to hash out the details. The potential settlement would resolve a lawsuit filed by Pebble after the E.P.A. ruled, in 2014, that the mining project would pose a risk to salmon and Alaska natives in the Bristol Bay area. The potential settlement could open the doors for Pebble to pursue permitting for the proposed mine—though a settlement wouldn’t directly result in permits.

Commercial and recreational anglers, as well as other environmentalists and the general public, have opposed the Pebble mine from the beginning. Scott Hed, the director of the Sportsman’s Alliance for Alaska, criticized the potential proposal and called on President Donald Trump to protect the fish and wildlife of Bristol Bay. “Protecting Bristol Bay from the Pebble Mine has been a priority issue for the hook-and-bullet community for 10 years,” Hed told Field & Stream via email. “This is a real test for President Trump, who said all the right things to sportsmen during the election. Rolling back protections for Bristol Bay would fly in the face of [anglers], fly-rod makers, big-game hunters, and firearms manufacturers—the entire sporting spectrum. That would be a direct assault on our values, and wouldn’t be greeted favorably.”

After lengthy litigation, Pebble CEO Tom Collier said the pending settlement was made possible by an understanding with E.P.A chief Scott Pruitt regarding the project’s environmental-review process. “On that basis, we anticipate achieving a resolution to these matters next week,” Collier told reporters. Pruitt, who has recused himself from a number Obama-era environmental lawsuits he filed on behalf of Oklahoma, has curbed E.P.A. regulations on climate change and protections for clean water, acting on orders from President Trump. For his part, President Trump signed an executive order in April that would allow for offshore drilling of oil and gas in the Arctic.

What’s more, last month Pebble was awarded a land-use permit by Alaska’s Department of Natural Resources, after the review of more than 2,000 public comments—a major step in the company moving the project forward. As a result of the comments, the permit comes with additional stipulations, including more site inspections, a $2 million bond for cleanup, and increased oversight by the state government in the event the company goes under.

Opponents of the mine have recently accused Pebble of trying to buy support for the mine. Per the Alaska Dispatch News, Nunamta Aulukestia, a group representing Alaska native-village corporations and tribes in the Bristol Bay area, said the company offered Kimberly Williams, the group’s former executive director, a spot on an advisory committee. According to a Nunamta spokesperson, Pebble offered Williams a number of perks, including a stipend and travel money, in exchange for joining the committee. In a statement, the group said, “while unfortunate, it is not uncommon for outside mining companies to try to influence local voices by offering jobs and other monetary rewards. Pebble is resorting to desperate tactics to buy support for its mine.”

Williams, who was fired immediately after announcing her acceptance of the post, said her position on the mine has not changed and said she wouldn’t accept the stipend.