Fair Game: What Happens When Ego, Trophy Hunting, and a Hunger for Fame and Money Collide…and Are Caught on Camera

Thumb through the Wyoming antelope, deer, and elk regulation booklet and you’ll run across assorted highlighted axioms that would seem... 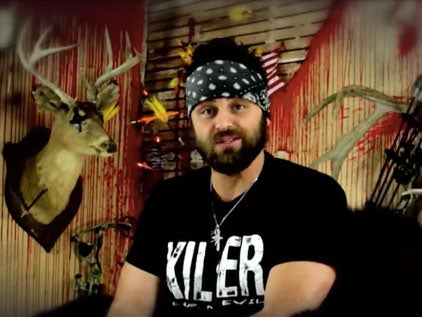 Thumb through the Wyoming antelope, deer, and elk regulation booklet and you’ll run across assorted highlighted axioms that would seem too homespun to bear repeating. Oh, I don’t know, ones like, “Know your maximum effective shooting range.” Or, “Use your binoculars, not a rifle scope, to survey the field.” A hunter who seriously must be reminded of such basics ought to be too embarrassed to sit in the diner at 5:00 a.m., dunking crullers, let alone going out to look for game. Apparently, though, there is no bottom to the depths of jackassery to which some so-called “hunters” can descend. Hand them a TV camera, and a hunger for money above all else, and it seems that they can dig a hole right through to the center of China.

The latest, if somehow not quite most outrageous, example would be Chris Brackett, star of “Fear No Evil” on the Outdoor Channel—or at least he used to be. Mr. Brackett, until a few years ago was something of a non-entity, who claims credit for “creating” the “sport of AERIAL BOWFISHING” in which you run a boat down a river to stir up silver carp and then shoot them out of the air (its premiere at the Games of the XXXII Olympiad would appear to be pending), lifted the name of his show from the Psalm of David and reaffirms his visible piety with a white cross around his camouflaged neck. Mr. Brackett also favors a type of WWE black face paint and refers to his coterie as “FNE Warriors,” any similarity to Hulkamaniacs almost certainly intentional. His online merchandise line includes a T-shirt emblazoned with the understated, and never less than tasteful, word “Killer.” And his show, he insists, lays claim to a “new revolution in outdoor TV with its high energy, artistic, and movie like feel.” Watching some outtakes from a recent whitetail hunt in Indiana (below), though, leaves the viewer with feelings perhaps not so much of energy and artistry as of repugnance.

According to reports, Brackett was muzzleloader hunting on a farm where the owner had informed him that there was a specific 8-point deer he was not to shoot, because the landowner wanted to give the buck a couple more years for optimum growth. So at last light, Brackett shoots it. He is recorded fist-pumping in the blind and can be heard stating that he has his deer, identifying it as an 8-pointer. Already, Brackett has overlooked another of those foolish admonitions in the Wyoming booklet: “Respect the landowner and the game you pursue.”

But wait, in words as seen on TV: There’s more!

While the camera is still rolling, Brackett looks out and spots a 170-class 10-pointer entering the field. So, setting down his gun, Brackett leaves the blind; and as the 10-pointer runs off, he goes out to the buck he has already killed and puts his tag on it, prepared to apologize to the farmer, even though it costs him the trophy footage he would want for his TV show. That’s what you’d assume he does. Right?

What he does is reload his ol’ charcoal-burner, draw down on the bigger buck, and, in a billow of blackpowder smoke, proceed to shoot the buck in the, let’s say, hindquarters, corroborating every prejudicial opinion of hunters that has ever been voiced.

There seems little value in outlining the game laws that have at this point presumably been violated. (Indiana does have a rather sticky rule that you are allowed only one buck per season; but nobody in this case has been convicted, yet.) More interesting is how the footage came to light, since even the most shameless, feeble-minded poacher would, one thinks, be insightful enough to destroy the evidence. There exists, though, footage from an earlier occasion (video below) showing Brackett, in a burst of obscenity worthy of a TMZ meltdown exclusive, launching a dozen F-bombs, and the Lord’s name a few times for good meassure, during a 50-second tirade at his cameraman. So if you’re wondering where the deer footage could have come from, just remember that karma is a bitch. And burn the tape.

In the days that followed the release of the video from Brackett’s Indiana hunt, it didn’t take long for karma to strike: Bloodsport Archery and Grizzly Coolers terminated their contracts with Brackett. ScentLok issued this statement, and Elite Archery said it was reviewing the allegations. And on Nov. 14, the Outdoor Channel announced that they would take “Fear No Evil” off the air, effective immediately.

An investigation to the allegations against Brackett is ongoing, but a November post on Brackett’s Facebook page—a post that appears to have been deleted—began with the statement: “I was wrong, I will face the consequences.”

If hunters and hunting weren’t under attack enough as it is, should we now need to explain the likes of on-air baboons like Brackett (I’m sorry, “baboons” is unfair—to baboons)? Does heroic trophy footage justify flouting ethics or the law? When we say that real hunting is not like this, can we expect to be believed?

Last spring, Billy Busbice, former chairman of the Louisiana Wildlife and Fisheries Commission, founder of Wildgame Innovations—makers of trail cams and feeders—and star of his own show “Wildgame Nation”—or at least he used to be—pled guilty to killing a cow calf elk and a bull, after some injudicious lead slinging into a herd, and abandoning the calf carcass in a ditch and tossing the bull’s gut pile into the creek, while hunting on his own ranch in Wyoming in the fall of 2016. On the video of the “hunt,” Busbice is said to be heard saying, “We have to eliminate that part when I shot a cow.” Following the poaching charges against Busbice, the Outdoor Sportsman Group issued a statement, suspending “Wildgame Nation” and Busbice from appearing on the Outdoor Channel.

Earlier that same fall, Busbice also made a false declaration to purchase a resident elk tag along with purchasing an unauthorized number of deer licenses. Which, as so many things in the hunting world seem to, leads us, alas, to Theodore Anthony Nugent.

Our own MotorCity Madman, WhackMaster, StrapAssasin1, Uncle Ted (his blushing names for himself), possessor of such self-proclaimed laudable traits as a strict abstemiousness from drugs and alcohol, if not sexual abandon (remember his “hit,” “Jailbait”?), support for our troops, and a sense of patriotism falling just short of having himself dyed red-white-and-blue, remains even in his advancing years among the ultimate guitar gods. There is, in the words of one-time Black Flag lead singer Henry Rollins, only one way to ruin a Nugent concert: “He starts talking.” One thing he seems not to like to talk about much is his history of unfortunate failures to observe the letter of game laws.

First came his killing a spike buck over bait, which made it onto the air of one of the various iterations of his hunting shows. The problem? It was in California where hunting spikes and baiting were illegal, and he was observed by two California game wardens—watching the show at home on the television. Result: Guilty pleas to misdemeanor charges for the baiting and a bargain-basement one of failing to get his tag signed by a government official.

Then came an Alaska black bear hunt, again for a TV show, during which Ted arrowed a bear over bait, but after “diligent effort by my son and me, we were convinced that this bear was alive and well.” So he shot, and this time managed to kill, another bear. In this hunting area in Alaska, though, a wounded bear is counted against a hunter’s annual quota—of one bear. Result: state fines for an illegal bear and federal fines and probation, along with restrictions of his hunting privileges on public lands, for possessing and transporting that bear in violation of the Lacey Act.

Google Nugent’s “Ignorance of the Law is No Excuse” and read his “apology” for his Alaska crimes, and treat yourself to what is a 6-percent admission of guilt and, in spite of that title, a 94-percent self-serving excuse for breaking the law, ending with his solemn pledge to “American outdoorsmen,” not never to repeat such a violation, but to “work to repeal onerous, unscientific, counterproductive rules and regulations that make no sense.” Question is: Has he done even that much, and if so, in what way?

Ted’s jaw-dropping excuse for his actions, that Alaska’s game laws have been, like so many across this great nation of ours, “ravaged by the over-regulation beast,” demonstrates in him a willing ignorance (unlike that ignorance of his, supposedly, about game laws) of Aldo Leopold’s modest proposal: “Ethical behavior is doing the right thing when no one else is watching—even when doing the wrong thing is legal.”

Nugent has hunted in Africa many times, where it is almost universally the rule, ethical and statutory, that when you draw blood, that is your animal whether you recover it or not. That is the right thing, the truly diligent thing. The prosecutor in Alaska said there was a blood trail on the first bear, making it his by law, which Nugent doesn’t tell us and which means as well that he and his son don’t seem capable of following up a bleeding bear, which is what he is showing the world. What kind of WhackMaster is that? More importantly, is Nugent saying that we may regard the game in our country as being to a degree inferior to game in Africa, as long as what we’re doing is considered legal? Is that what we want to show our fellow hunters, and the public at large, about hunters and hunting? What does it say about TV hunters who can’t even do the ethical thing when the cameras are rolling? If they could, perhaps fewer “onerous” regulations would be needed.

None of us is without sin, of some greater or lesser rank. And, yeah, many of the platitudes in that Wyoming regulations booklet sound silly and naive. Like, “Mistakes happen—own them.” But who’s really dumb enough to believe that with the likes of Brackett, Busbice, and Nugent lighting up the airwaves?

Tom McIntyre is the author, most recently, of Augusts in Africa: Safaris into the Twilight: Forty Years of Essays and Stories