Father and Daughter Hit the Road, Fueled by Starbucks and a Poor Diet

Highlights of the last trip of summer 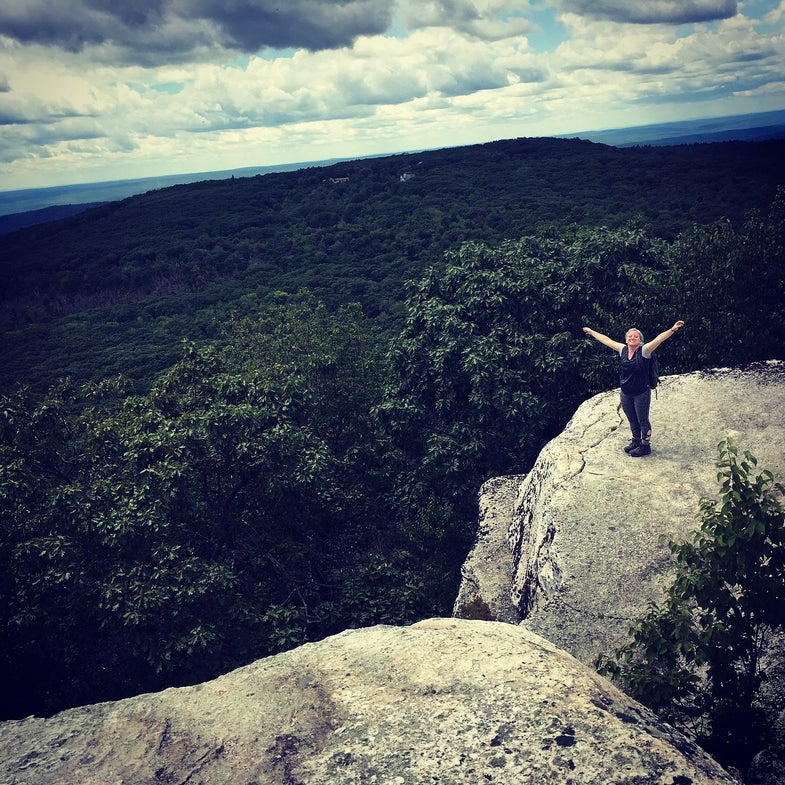 Emma and I have been doing a final father-daughter road trip before she starts her senior year of high school. The idea for the trip was to do some day hikes—the one thing she seems to enjoy in my company—eat atrocious food, and stay in seedy, inexpensive motels. I was determined to make this her trip—no fishing tackle, no dietary restrictions, no forced bedtimes. This was partly to make her feel indulged and partly because I have come to accept that I no longer have power to force her to do anything she doesn’t want to. I told her as much. I told her I wanted her to get used to the idea that she’s going to have to be the one she answers to. She obliged me by going on three pretty good day hikes, where she proved herself to be a stronger walker than I’d have imagined. Evidently, kickboxing agrees with her.

On our last day, we’d planned to revisit the scene of our first hike, the falls trail at Ricketts Glen State Park near Benton, Pa. This is a 3.5-mile loop trail that features nearly 20 waterfalls, any one of which would be worth the hike. It’s an easy path, great for kids. You should go if you possibly can. We liked it so much we were willing to do it again. We’d gone on a Sunday and figured a weekday would be much less trafficked.

A glance at a paper map (which Emma refuses to do because she can use my phone), showed that this would add three hours to our drive home. Instead, we opted for a more convenient but no less worthy option. We would undertake an expedition to the highest point in the great state of New Jersey. Only 43 states have peaks higher than High Point Monument, a majestic 220-foot obelisk that sits atop that 1,380-foot-tall summit of—actually, I don’t even know if they call it a mountain. It’s the High Point Monument in High Point State Park in Sussex. The trail was another 3.5-mile loop, except posted with ominous warnings about bears and ticks. Emma was worried about both, so we sang anti-bear and anti-tick songs to bolster our courage. One went:

Emma also came up with an anti-bear version of this song.

She thought this was a hilarious song. She had just had a Starbucks Unicorn Frappucino (the big one, the venti, which has 76 grams of sugar, enough to bring back the dead). Her pupils were the size of pinpricks. You don’t mess with a child mainlining one of those things. You get out of her way. We hiked through a light drizzle to overlooks where you could see three states: New Jersey, Pennsylvania, and New York. At least, that’s what the trail guide said. All we could see was a tri-state mist. “That’s some gorgeous mist,” I observed. “What are you talking about?” Emma asked. “Mist,” I said mysteriously.

We passed a boy, his two sisters, and their mom coming the other way. “Be careful,” I told the boy. “Buncha bears up there. They looked pretty angry, too. But it’s cool—they’re not big bears.” He shrugged as if he understood me perfectly. “Don’t mind my dad,” Emma said to the boy. “He’ll talk to anybody.”

We finally got to the highest point in New Jersey, which, to our dismay, you can also drive to. We consoled ourselves with trying to walk the 4-inch-wide planks on the waist-high parking-lot guard rail, which was about 150 yards long. Emma only fell once. After falling once, I resolved to focus more. I centered my gravity 2 inches below my belly button, engaged my core, and tried to relax. I fell three more times.

Inside the monument sat a young park ranger playing on his phone. It’s about 20 flights of stairs to the top but the obelisk is unventilated, so the air gets stuffier and hotter the higher you go. We turned back after about five flights. We figured that we were on vacation. Also, we’d just paid $109 to spend the night in a former Howard Johnson’s going rapidly to seed, where every room was a smoking room and most people paid by the week. We weren’t looking for additional discomfort. “So they built this thing without vents?” I asked. “No, they had ’em,” he said. “But then they put sensors on them so they could be controlled from here. And then they broke.”

We stopped at another Starbucks coffee, where I vetoed another Unicorn—you have to assert your authority occasionally, but you pick your shots with a redheaded 17-year-old daughter. Emma settled for a smaller version of what was probably equally horrible, a Pumpkin Hazelnut Nightmare or something. And then we drove the last 250 miles home. All in all, a pretty great time.