How to Find Bucks in the Sweltering Early Season

Push through the heat for a chance at a trophy 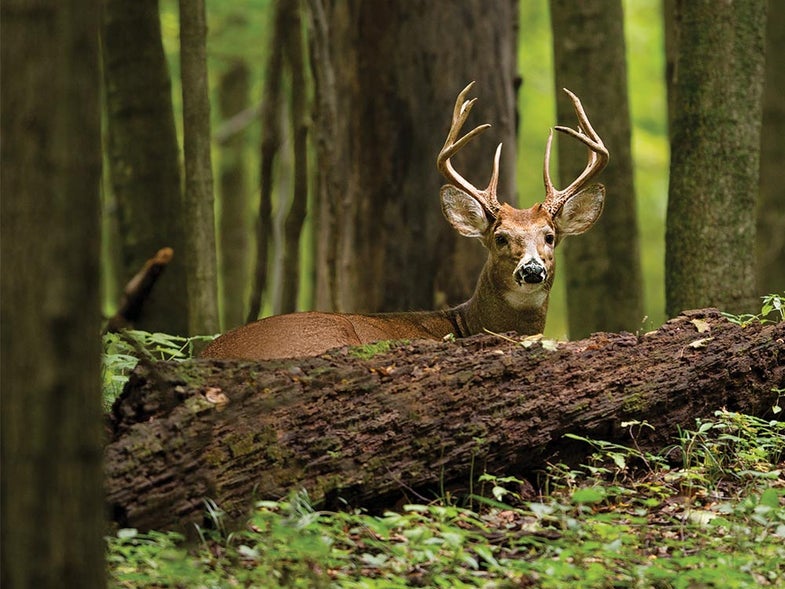 The air is stifling, the temperature outrageous. Limiting your scent dispersal will be a challenge just while getting to your stand. Let’s face it: On many days during early bow season, the thought of sipping a cold brew in an air-conditioned room is very tempting compared with the prospect of sitting in a tree. But you won’t mind the sweat when the end of the day sees you gripping the antler bases of a reclusive early-season buck, or maybe the top dog in a bachelor group, that you just arrowed.

Right now you’re hunting only a few members of the local deer herd—mature bucks that are skittish, secretive, and not seen regularly on food plots or cropfields in daylight.

Not yet, anyway. As the air cools and the rut approaches in late September and October, it will be a different story. For now, they are ensconced in tight cover and largely nocturnal. What little daytime movement there is comes near the edge of four key areas where these deer hole up in hot weather. Before taking a look at those hotspots, realize that while daytime movement is scant, it is stronger on certain days.

Cooler temperatures obviously see increased buck movement. But watch the barometer, too. The best activity in late summer occurs when it’s steady or rising with north or west winds, and a lighter feel to the air.

High humidity, a low or falling barometer, and south or east winds stifle activity, as does a rain from those directions. A shower from the northwest, in contrast, can increase buck movement.

These offer bucks great vantage points to watch for danger from below and scent predators from behind. They’re also cooler.

My hunting land tapers upward from stream bottom to rolling foothills and then ridges. I can almost rule out the lowlands in the early season. When it’s hot, almost every good buck is on a knoll, ridge, or bench, savoring the breezes that caress these higher locations.

Tip: Look for a blowdown or small thicket on the ridge that offers security without obstructing the view below. Bucks need a bit of cover in addition to the cool breezes and visibility.

These slopes get just enough light in morning to nurture forbs, mushrooms, and edible shrubs, but not enough to dry the moist ground. When the sun gets high, any light disappears from these dark, thick-vegetation areas. That keeps them cool during hot afternoon hours—just what an old buck needs.

Tip: The cooler, moist conditions make these great places to plant a low-impact, mini food plot using hand tools and a mixture such as Secret Spot or Hot Spot. That both adds to their appeal and concentrates buck activity near your stand site.

The air in a dense stand of pines, fir, hemlock, or spruce can be several degrees cooler than surrounding deciduous woods in summer. That draws bucks like a magnet. Look for young to middle-aged trees, especially those with vines, briers, and weeds growing up between them. Those stands offer food and cover along with the cooler air.

Tip: Mature conifers will also attract deer, but focus your search on gaps or open spots in the stand. The extra sunlight in those areas will allow forbs, blackberries, grapes, greenbrier, and honeysuckle to take hold.

If there’s one thing a deer wants during hot weather, it’s water. He can find this at ponds and puddles, but springs and creeks offer both water and more comfortable temperatures.

The best water sources have adequate cover right next to the spring or the creek, as well as strips of dense vegetation that lead back to the rest of the buck’s core summer area.

That connecting feature is important, because deer often move to these creeks temporarily during particularly bad heat spells, and they want to have a secure route from there back to the ridges, conifer stands, or northeast-facing slopes where they normally like to bed.

Tip: These water sources are especially productive when the weather is hot and drought conditions also prevail. If rainfall is abundant, focus on the other three hotspots.

RELATED: Five Places You Don’t Want to Hit a Deer