How to Find Duck Honey Holes After Opening Day

Those birds didn’t go south after the shooting started. Here’s where to find them 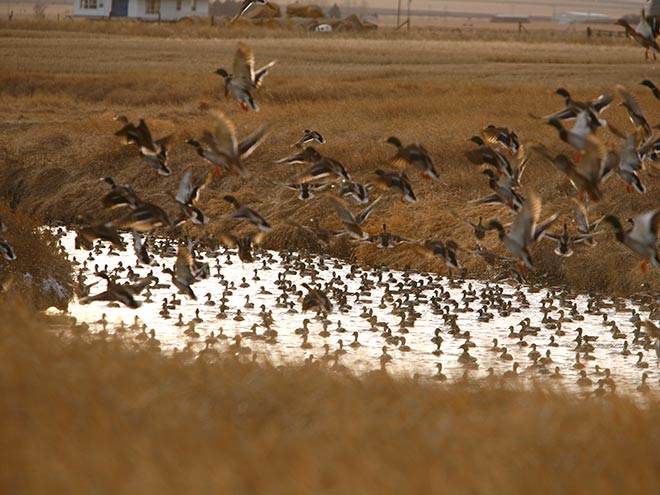 It’s opening day on Management Area X. The boats and the blinds are thick, but so are the birds. It’s a good hunt for everyone.

Day two dawns, and the crowd’s still there on Area X, but the ducks didn’t get the memo. While there’s a stray here and there, the activity has dropped off to almost nothing. It’s another typical day after the opener on public grounds, and good reason to stay home and get something less enjoyable done. Or is it?

RELATED: How to Make a Duck Call Out of Spent Shotshells

Luke Clark, a media manager for Rig’Em Right Waterfowl, has done more than his fair share of gunning public wetlands on the day following the opener. It takes some extra time and effort, but there are usually still birds to be had. “Anywhere you go,” Clark says, “there are almost always some resident birds around—somewhere—that will provide opportunities. These ducks will stay in the same general area, but for the most part, they’re not going back into the big marsh where most of the hunters are waiting. Unless you haven’t seen any birds at all in the area in several days, the second morning is not the time to give up.”

Finding hidden honey holes on the fringes of public hotspots is not always easy. “You have to scout, scout, scout,” Clark says. “You need to find those places that are unmolested by people. No trails. No willow blinds. No evidence that other hunters have been there at all. You’d be amazed at the places I’ve found just by going an extra quarter mile up the creek.”

Clark uses satellite images, updated maps, binoculars, and his canoe to find the hidden wetlands he’s after. “I start hiking or rowing until I find promising spots,” he says. He and his crew will reconnoiter an area until they know the location of every low spot that can hold water, either on day two or throughout the season, depending on the rainfall. “The more insignificant the spot seems, the fewer people are going to be there—and the birds know that.”