Smartphone map apps can help plot a course, but there's no better replacement for tracking where you've gone and where you're going than a map and compass 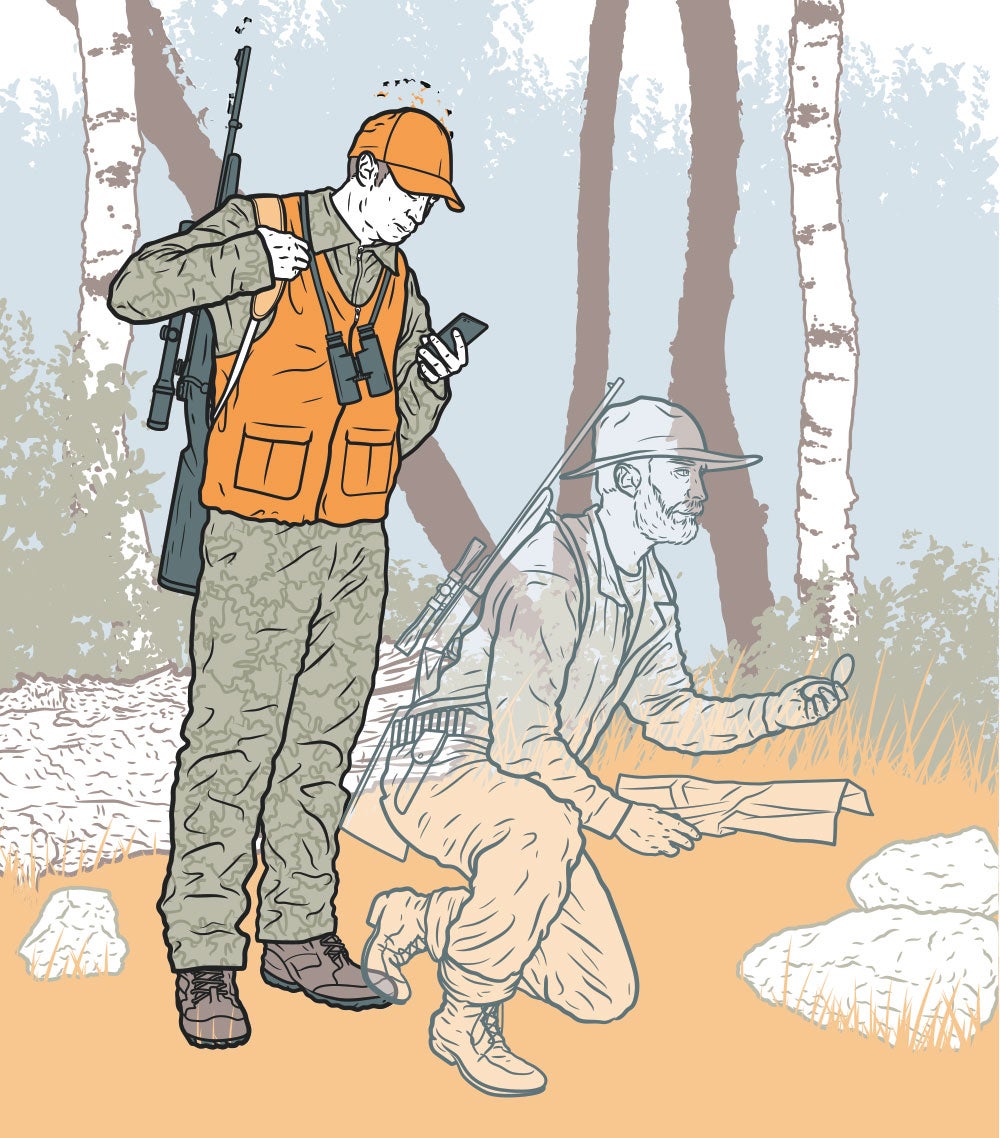 When I pulled up to the end of the farm path by Dead Dog Field, I checked the map on my cellphone before turning toward Stillwater—and that’s when I realized this had gotten out of hand. I knew to turn left to get to my deer camp; I had driven out from Dead Dog a million times. But there it was, in my hand, my cellphone with the little blue blip that marked my location on a digitized satellite image. I had checked it without even thinking.

This time of year finds me in the deer and duck woods almost as often as during deer and duck season, because it’s a great time to scout with the leaves still off the trees. I had spent the morning stomping up and down the creek, marking locations on my mapping app. Buck rubs, creek crossings, duck swamps, oak groves, climber trees, beaver dams—all those waypoints and hash-mark routes glowing on the phone screen gave me the feeling that I’d figured out the big woods by Dead Dog Field. Then I drove out to the hardtop and couldn’t even make a simple turn without looking at my phone. It was instinctive by then. A habit. Faced with the simplest navigational choice, my first impulse was to pull out my phone instead of using my noggin. This had to stop.

There are plenty of funny stories—and horror stories—about folks who wander off-trail while their eyes are glued to their cellphone maps. That’s not the problem I worry about; I hope I’m smarter than that. And my concerns run deeper than the old saw about what I’m going to do if my battery dies. I carry a small backup battery pack. Some problems are easy to fix. But turning our back on paper maps has sown the seeds of a more insidious problem.

With a paper map, you have to pay attention to your surroundings before you can calculate where you are, or how to get to where you want to be. You have to find yourself on the map before you can find yourself in the field. You need to know whether you are, generally, east of the ridge gap or south of the hard road. You need to be able to translate a map’s features to the landscape around you. Digital maps, however, put us at the center of the world by default, always, everywhere, and in real time.

On the phone, the world revolves around us, a known entity. There’s no need to keep track of which shoulder the sun is setting behind. North is no longer a true direction from which all other directions and routes emanate or orient. It’s an icon on a screen. With my map app, I cede to the little black box in my hand the vigilance I used to keep with regular check-ins to a map and compass. And I don’t learn the woods like I used to. I don’t have to remember to angle left at the gum tree with the busted branch that looks like a bear’s face. I know I can always get back here. But over the last couple of years, as I’ve built a dense database of waypoints and track logs, I fear I’m losing touch with where here is.

These apps are great tools—­irreplaceable for many tasks. But as with any tool, using them too often is like using a favorite hammer too much. You can use it to pull the staple out of the fence, but a pair of pliers would work better and not leave a mark. You wind up looking at your phone to confirm what you’ve known intuitively for a decade: Turn left, you idiot, to get back to Stillwater.

Perhaps the most intensive navigational experience I’ve ever had was on a weeklong canoe trip in far northwestern Ontario with my buddy Scott Wood. We paddled a complex of rivers and miles-wide lakes all connected by small sloughs and unmarked portages. With the map and compass in the bow paddler’s lap, we called out the intricate details of the shoreline.

“That point has a little hook in it. See that?”

“Looks like a creek there, but does that ridge look right?”

“Keep going. It’s the next bay past the marshy cove.”

If we missed the bay that led to the cove that drained into the fir-lined outlet slough, we’d lose hours if not days of travel time. It was nerve-­racking and exhilarating. A digital mapping program would have removed the work—and the anxiety—of knowing exactly where we were. But it would have also removed our constant communication and our steady check-ins with the land around us, which built a feedback loop that tied us to one another, to the water, to the woods, and to the cadence of the canoe moving across a remote wilderness. There was a sense of capability and accomplishment in moving by map and compass, for sure, but each time we navigated to the correct little stream outlet, it felt like we had not only found our way across the landscape, but also deeper into it—like a friend had confided a secret or passed along some nugget of wisdom that opened up a different way of looking at the world.

So, I’m going to work on this. I’m going to be more mindful about which old skills I let go of, and how I bring technology into my relationship with the wild. It’s a powerful feeling to hold the entire world in one hand, and to be able find my way to the very waypoint that marks the tree beside the slough that leads to the beaver pond that no one else in camp knows is there.

But more often these days, what I really need to do is find my way back. Back to camp, certainly. But back, also, to a place where I listened to the creek more intently, and noticed the shiny slickness of fresh deer droppings, and watched for the telltale dip in the silhouette of pine woods against the sunset to tell me it was time to turn west toward home.

Read Next: 10 Reasons People Get Lost in the Wild

Whether you’re lost or found, the new CRKT Pack Axe will make short work of chopping kindling, felling small trees for an emergency shelter, or clearing an overgrown campsite. With a length of just over 11 inches, it’s easy to lash to a pack frame or tuck into a pack pocket. —T.E.N.