A walk through the parking lot of my gun club reveals the usual assortment of vehicles used by outdoorsmen—F250s, Ram... 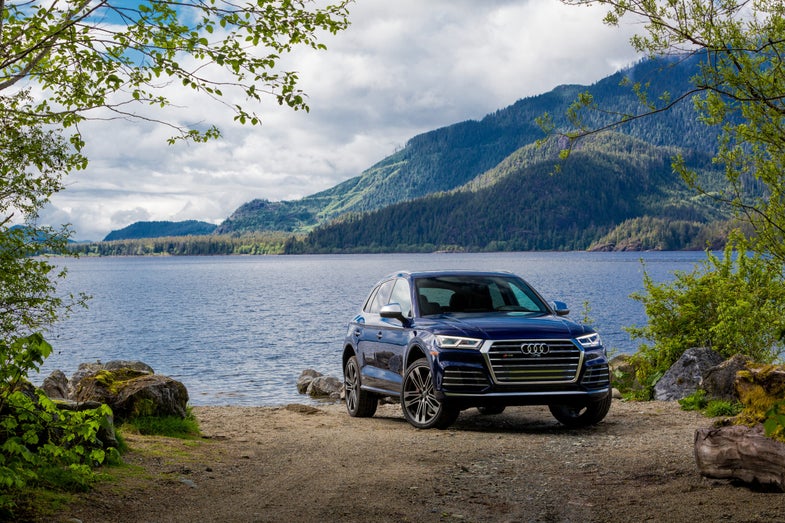 A walk through the parking lot of my gun club reveals the usual assortment of vehicles used by outdoorsmen—F250s, Ram 1500s, Silverados, Tahoes, Grand Cherokees, Colorados, Tundras, and Explorers. You’ll also see the occasional Range Rover. But one day, I noticed something different tucked in between a pair of full-size SUVs—an Audi Q5.

In some ways, it was like spotting Waldo, and after a sporting clays competition one afternoon I saw the Audi’s owner wiping down his over-under in the lot. I asked him, “How do you like the Q5?”

“Not a typical choice, is it?”

In sum, he explained he didn’t need a full-size SUV or pickup (“just too big”), and a compact pickup didn’t fit his lifestyle.

“I’m all about performance,” he finally said, whether it’s shotguns, fly rods, or cars. The vehicle he wanted had to carry his hunting and fishing gear, and it needed to be able to handle bad weather (hence the all-wheel drive), but it also needed to perform on the road in the manner to which he was accustomed. And that meant he wanted to experience the thrill of a vehicle built to reward driving skill.

So, when I had the opportunity to drive the new 2018 Audi SQ5 (essentially a sportier version of the Q5) last week on Vancouver Island, I jumped at the chance.

And, now I know what that Q5 owner was talking about.

Featuring a new 3.0-liter TFSI (turbocharged fuel stratified injection) V6 engine, the SQ5 produces 354 hp and 369 lb-ft of torque between 1370 and 4500 rpm. The eight-speed tiptronic transmission allows the engine to deliver low-end torque as well as quick, smooth shifts. Given that much of the driving was on two-lane roads in hilly terrain, I appreciated the ability to quickly take advantage of safe passing lanes around lumbering tandem-trailer fuel trucks and RVs.

Like other vehicles in the Q5 family, the SQ5 benefits from Audi’s quattro all-wheel drive. But the S package amps that up with a “sport” rear differential that splits torque between the rear wheel, helping the driver to handle dicey situations such as snow and mud. The chassis and suspension have also been refined to produce an improved ride, and the new SQ5 includes an air suspension option that can raise and lower the body height by a little more than an inch. Doing so lowers the profile on the highway for improved performance and raises it when you need a bit of extra room while on a gravel road or access trail to a trout spot.

Also new, the interior offers a bit more space compared to the previous generation. That means more rear legroom and shoulder room, as well as increased cargo capacity when the second-row seats are folded down.

And like higher-end vehicles these days, the SQ5 can be had with a full complement of entertainment and information features. The navigation portfolio is especially interesting. Maps can be had on a stand-alone panel that protrudes from the middle of the instrument panel. When I asked why it was positioned there, Amelia Fine-Morrison, manager of product communications, said it was to help keep the driver’s eyes on the road rather than looking down. But she also noted another feature in what she referred to as “Audi’s virtual cockpit”—a “sport” display mode. “This feature is unique to the SQ5,” she said. “It brings the tachometer and speedometer front and center of the display. You’ll also see a full-color heads-up display that projects relevant driving information directly in the driver’s field of vision.”

I should also add that the navigation maps can be projected in the same space, another way to keep the driver’s eyes firmly on the road. It’s a nice, and much appreciated, touch, especially on the winding roads I drove.

As you might expect, performance at this level has a cost. The base level SQ5 starts at $54,300. The model I drove goes for $65,800. But when you consider that a high-end GMC Denali will now top $70,000, the SQ5 delivers a lot for the money. It’s surely not for everyone, but if you prize performance above all else, it’s worth a close look.