A classic ride gets an update for the new year 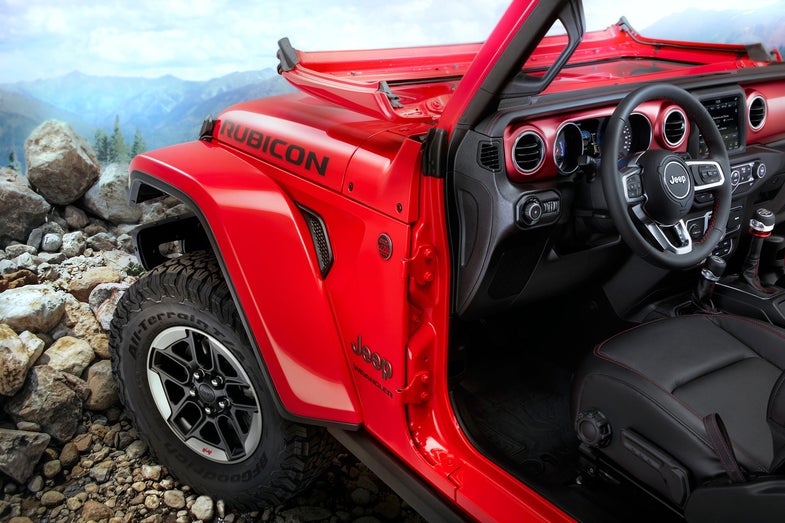 Over the years, Jeep has earned its spurs. Now recognized as an American icon, it’s as much a part of our heritage as the fabled Winchester Model 1873 lever action or John Browning’s classic 1911 pistol. And though the 2018 Wrangler, which I saw at a press preview last week near Tucson, Arizona, boasts features to which the original Jeep never even aspired, Jeep is well aware that to depart too much from what it is (and what people want it to be) is to court disaster.

“When you think Jeep, the Wrangler really is what you think about,” says Jeep head designer Mark Allen. He notes the vehicle’s humble beginnings in World War II and fully comprehends the cult-like status of earlier models such as the CJ5 and CJ7. At the same time, he understands that in today’s ultra-competitive atmosphere the brand can’t rest on its laurels. It has to move forward. Yet it can’t sacrifice the very things that make a Wrangler a “Jeep.”

“It’s a fine line,” he says. “We need to appeal to new owners, especially those coming from Toyota and Honda, who are demanding more in the way of comfort and on-road drivability without alienating the base Wrangler owner that got us here. You never give up your base.”

The answer, he says, is “More.” By that he means staying true to the original concept, but offering “more” of everything for the vehicle’s expanding owner base.

One of the ways he does this is to use the annual Jeep Jamboree in Moab, Utah (famous for its slick-rock offroading), as a test lab. He’ll bring new engineers and designers who may not have a lot of 4×4 experience and turn them loose to get a feel for offroad driving and handling.

“The CJ series is the playbook,” he says. “It’s the DNA that drives everything else.”

That said, he knows modern Wrangler owners aren’t much interested in a plain stamped-metal instrument panel, no air conditioning, and no connectivity. “We have customers asking for a luxury Jeep, and that’s the role of the Sahara. Those who want more of an open-air true 4×4 experience can opt for the Rubicon.”

The 2018 Wrangler has far too many features to list here, but here’s a quick summary of those that would be of most interest to outdoorsmen.

The 4×4 now benefits from a longer wheelbase and a wider track, which provides a far more comfortable ride on the highway. At the same time engineers vastly improved the turning circle, shortening it by more than one foot. Even on a daunting offroad course (which I ran in two-door and four-door models) the vehicle proved to be uncommonly maneuverable in tight spaces. Interior floor carpeting can be removed if the inside needs to be hosed down, and interior storage areas are larger and more accessible. They’ve added MOLLE storage panels and changed the shape of the cupholders to accommodate nearly any container you desire.

The windshield rake has been modified for improved aerodynamics and body panels have also been sculpted to improve air flow. The vehicle also shed more than 200 pounds over its predecessor by judicious use of aluminum components.

“You don’t usually think of Wrangler and aerodynamics together, but we decreased drag by nearly 10 percent,” Allen says. The improved drag and weight loss yield an overall fuel economy number for the 3.6 liter V6 (the engine I drove) of around 20 miles per gallon. That engine, by the way, is mated to a responsive eight-speed automatic transmission. A six-speed manual transmission is standard. There is also a 2-liter turbocharged inline four-cylinder engine, and a 3-liter EcoDiesel V6 engine comes aboard in 2019.

The offroad course consisted of a steep hill with large boulders, tight off-camber turns, and some truly nasty stair-step dropoffs, all of which tested the vehicle’s offroad capability. The four-door Sahara I drove on one leg handled it well, though with that longer wheelbase I could hear the skid plates shriek a couple of times. The real fun began with the two-door Rubicon, in which we lowered the windshield, opened the top, and removed the doors for a true open-air experience reminiscent of the original Jeep.

Armed with front and rear locking differentials, an electronic front anti-sway bar disconnect (to provide additional wheel travel), and low-range 4WD, the Rubicon moved easily and surely over the course. The most hair-raising section was that aforementioned hill, so steep that all you saw was blue sky over the hood. This is where you learn to trust your spotters as they give you the proper line to take to avoid any hang-ups. The key to getting up the hill was throttle control—you want momentum but not speed that will cause the wheels to spin. Given the low gearing, this was relatively easy to attain. That course is probably tougher than most hunters and fishermen will ever encounter, but it does show the Wrangler’s overall offroad capability, and those locking differentials can really help out when dealing with mud.

“In developing this Rubicon, every time there was a fork in the road, the enthusiast won,” Allen says. “It has higher fenders and you can replace the 33-inch tires with 35-inchers without having to lift the vehicle.”

Jeep also got rid of the zippers on the soft top to make it easier and faster to remove and install.

“In all, the 2018 Jeep Wrangler benefits from four million miles of development activity,” Allen says. It shows.