Towing a trailer is a learned skill, just like mastering the intricacies of reading a topo map and navigating with... 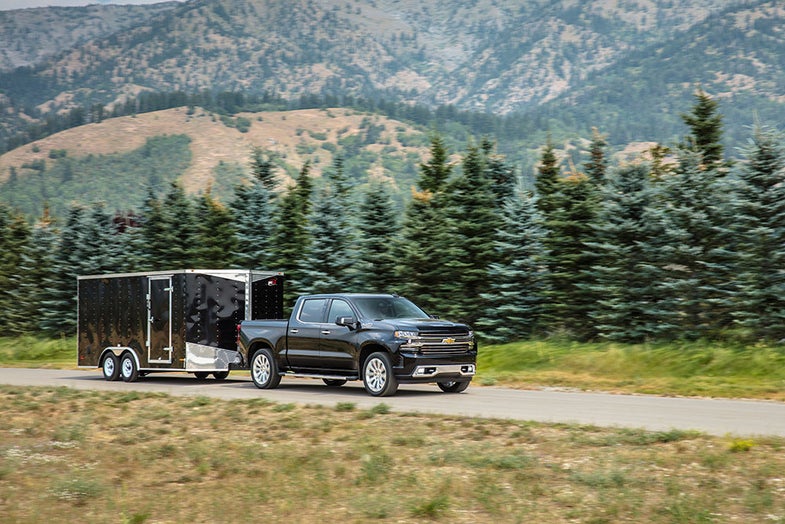 Towing a trailer is a learned skill, just like mastering the intricacies of reading a topo map and navigating with a compass. All three have a fairly steep learning curve, and failure to understand precisely what it is you are trying to do can lead to disaster; you can get lost deep in the Bob Marhsall Wilderness while elk hunting if you can’t read that map or lose a trailer on the road if you fail to hitch it properly.

But modern technology, in the form of GPS, has made wilderness navigation much easier. And modern technology is also making trailer-towing operations easier as well, as I saw recently on a preview of the 2019 Chevrolet Silverado in Wyoming.

In designing the new Silverado, GM says it interviewed Silverado owners about the features they would like to see on the new truck. According to GM towing engineer Frank Bruneel, “We heard a recurring theme. Our customers wanted an easier way to hook up a trailer safely, better visibility when pulling that trailer, and more connectivity between the truck and the trailer.”

To demonstrate what GM has done, I sat in the cab of the High Country model with Bruneel before we set out on a towing test and watched as he flipped through the features on the center console screen.

“We’ve set this up so the customer can have up to four cameras. There’s the hitch view, with hitch guidance, to help him line up the truck to the trailer hitch. This also has a zoom feature that gives you an even closer look at the operation. There are two sideview cameras, which are integrated into the side mirrors. And, there’s a rear trailer camera on the back of the trailer hard-wired to the truck so you can see what’s behind the trailer.”

To Bruneel, part of the beauty of the system is that any trailer owner can create a custom profile (as many as five trailers) that will track such critical information as mileage, fuel economy, and transmission temperature. “These profiles also include brake-gain memory, automatically resetting the electronic brake controller to the settings stored in the trailer profile,” he says.

GM has also made checking trailer lights a lot easier. “This used to be a two-person job, but now you can do it yourself using the MYChevrolet Trailering App on your smartphone,” he says. In addition, he notes that the truck is constantly running diagnostics on connections and will alert you via the screen about possible problems.

Trailer theft is a big issue, especially if you’re overnighting at a motel where you may be sleeping some distance from the truck. You may have a theft alarm, but not be able to hear it in time. But if you opt for the OnStar Safety and Security Plan, you will receive a theft alert via phone, text, or email that someone is tampering with the trailer.

Trailer tire pressure is another big issue, and GM has developed an optional feature that helps prevent tire failure while you’re running at highway speed.

“This is an industry first,” Bruneel says, “The trailer-tire temperature and pressure sensors mount on the stems of the trailer tires, where they monitor pressure and temperature and relay that information to the center console display.”

Over the years, every towing expert I’ve ever talked to says one of the biggest safety issues is weight; many outdoorsmen who tow don’t really know how much weight the truck can safely tow.

GM has addressed this issue by placing a trailer label on the door jamb that provides the specific weight ratings for your truck. “It’s VIN-specific,” he says. “The label is customized to your truck, and it lists the gross vehicle weight rating, maximum payload, maximum tongue weight, and curb weight.”

In developing these features GM consulted with the trailer industry, and though the “smart trailer” isn’t here yet, given what GM has done, it’s not all that far off.

The Silverado High Country model lists for $56,300. The list price of the one I drove with the optional 6.2-liter EcoTec3 V8 engine and trailer-camera package is $62,540.

In another post, I’ll focus on the performance of the Trail Boss model, which should interest outdoorsmen who spend time offroad.