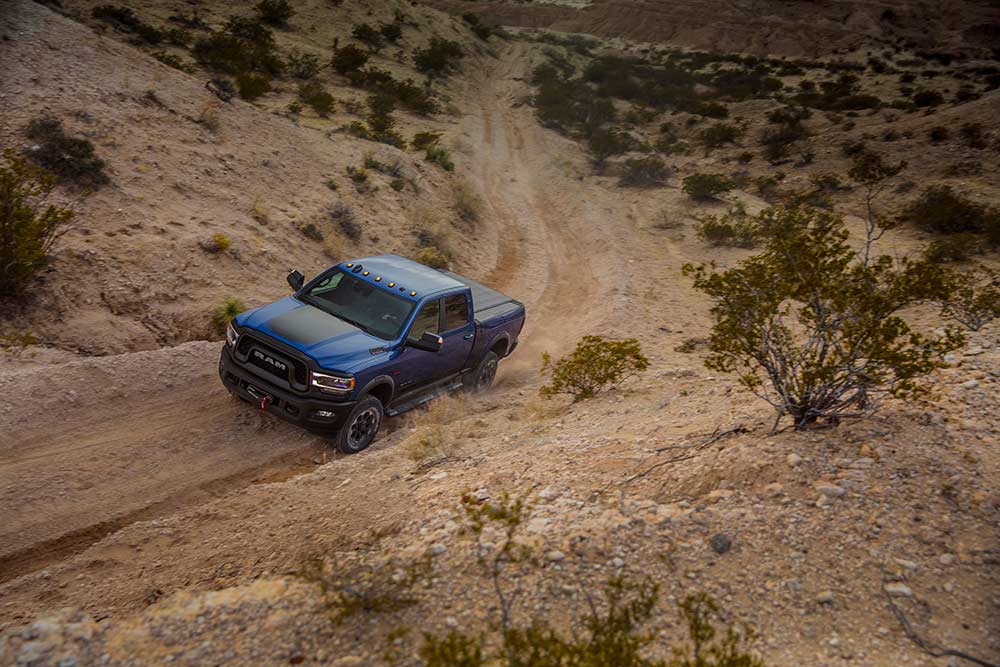 Put very simply, the difference between light-duty trucks and their heavy-duty counterparts is akin to the difference between a standard rifle cartridge (say the .308) and a magnum load such as the .338 Win Mag. Typically, light-duty trucks are half-ton models that often carry the 1500 (or 150) designation while their heavy-duty brothers are 3/4- and 1-ton versions often identified as 2500 or 3500 (250/350) models. (It’s a bit more complicated than that, but you get the idea.)

Heavy-duty trucks are often sought out by outdoorsmen and outfitters who tow or haul heavy loads. The trucks are also in demand for commercial use by contractors and tradesman of all sorts.

I recently got the chance to see Ram’s latest line of heavy-duty trucks. Though the new offerings display a level of luxury and comfort unheard of in heavy-duty trucks a generation ago, Jim Morrison, head of the Ram brand in North America, told me, “Luxury used to be a seatbelt. No more.” In other words, Ram customers are driving many of the new “comfort features” found in the 2019 trucks. “And all that is changing the way our customers think of this segment,” Morrison says. “They want performance, but also luxury and comfort.”

Of note for those who tow, Ram’s heavy-duty trucks now boast a towing capacity of 35,100 pounds. (This is for 3500 models with the optional 6.7-liter Cummins inline six-cylinder high-output turbo diesel engine that now generates 1,000 pounds-feet of torque.) Maximum payload has also increased to 7,680 pounds.

The Power Wagon is a heritage brand, fondly remembered by many older hunters for its rugged no-nonsense build and offroad performance. The 2019 version is considerably plusher, but as I learned on a challenging offroad course in the Nevada desert, it is fully capable of taking hunters and fisherman way off the beaten path.

Ram heavy duty chief engineer Rod Romain told me, “I think the most important component we added to the Power Wagon is an eight-speed transmission, which improves the crawl ratio from 35 to 1 to 55 to 1. The transmission also has unique shift maps that deliver better throttle modulation for offroad applications.”

That transmission, by the way, is mated to a 6.4-liter Hemi V8 engine. In addition, you’ll find the Power Wagon has a disconnecting sway bar, front and rear lockers, Bilstein shocks, factory lift, and tires designed for offroad use.

One of the most significant additions to the 2019 Power Wagon is a built-in 12,000-pound Warn Zeon winch. The winch features a new, lighter synthetic rope (which will not kink or fray) instead of the traditional heavy steel cable.

“Sometimes, those old steel cables can have a mind of their own when they’ve been wound around the drum for a while,” says Romain. “Here, it’s much easier to pull the synthetic rope off the drum and then run uphill with it to an attachment point.”

I saw that for myself when we winched a truck up a steep hill covered in wheel-spinning scree. The rope did unwind quickly, and it was far easier to handle as we climbed the hill to the anchor point on another truck. Once anchored safely, we signaled to the driver below to begin the recovery process. In no time at all, the truck was on top of the hill.

“This is a very capable vehicle for all-around offroad use, whether you’re going up hills or through mud,” Romain says. “The 4.10 axle ratios, the throttle control, the low crawl speed, and the articulating axles all work together to give you the ability to maintain control while negotiating difficult terrain.”

The Power Wagon, unlike many modern 4×4 trucks, still retains a manual transfer case. “We know the hardcore offroad guys really appreciate that,” Romain says. They do.

The offroad course we drove featured a number of difficult spots that amply showed off the Power Wagon’s offroad attributes. I especially appreciated the Gear Limit feature located on the steering wheel within easy reach of my thumbs. On steep hills, simply modulate it so you can descend slowly, and under complete control, without having to touch the brakes.

Lastly, sometimes it’s something very small that makes a really big difference. The old, annoying whip antenna has been retired in favor of a modern low-profile “shark fin” antenna mounted out of the way on the roof.