A Fishing Adventure with Old Pals on the New River

Three longtime buddies fish, raft, camp, and holler their way down one of the most iconic rivers in the East 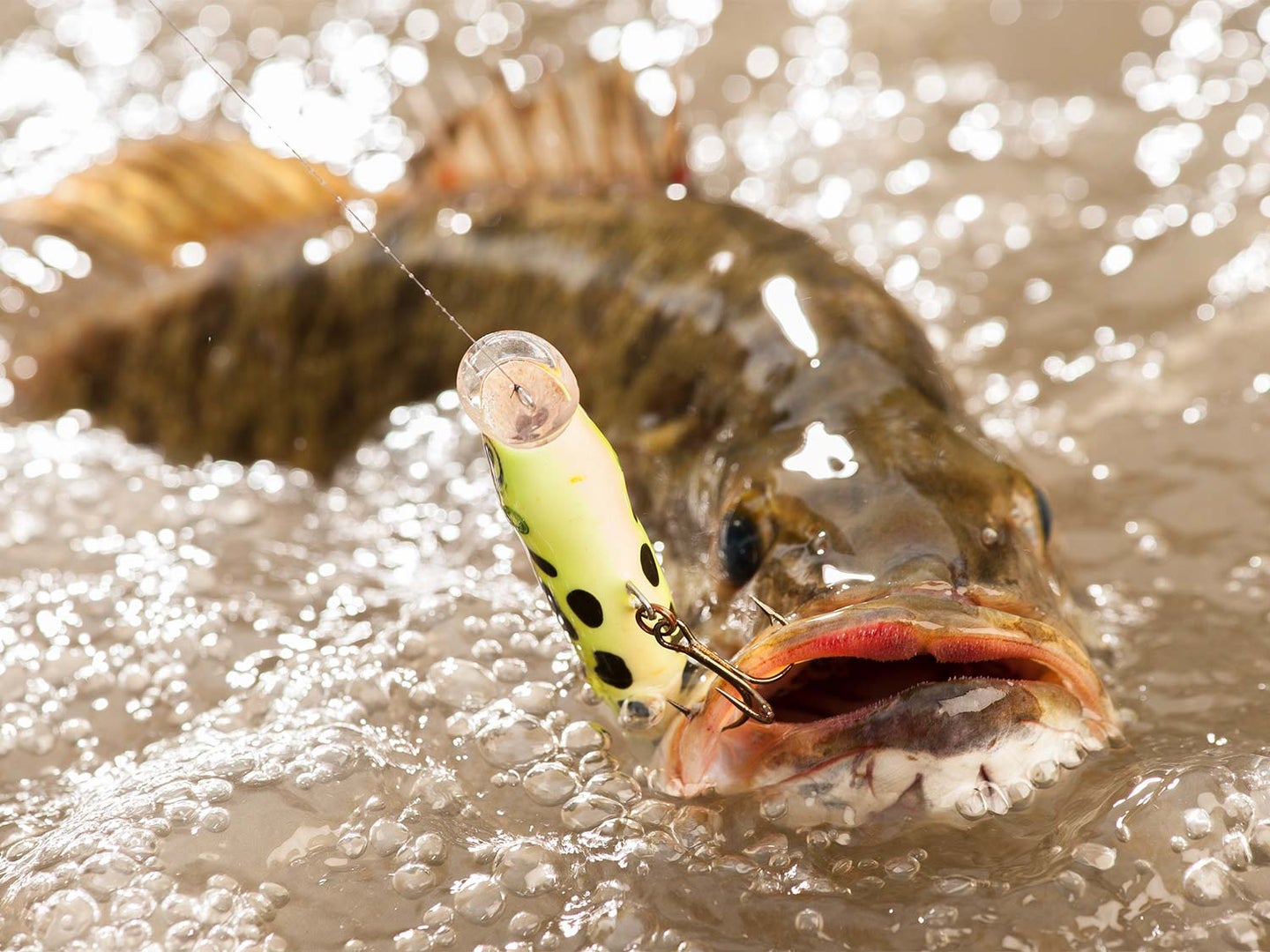 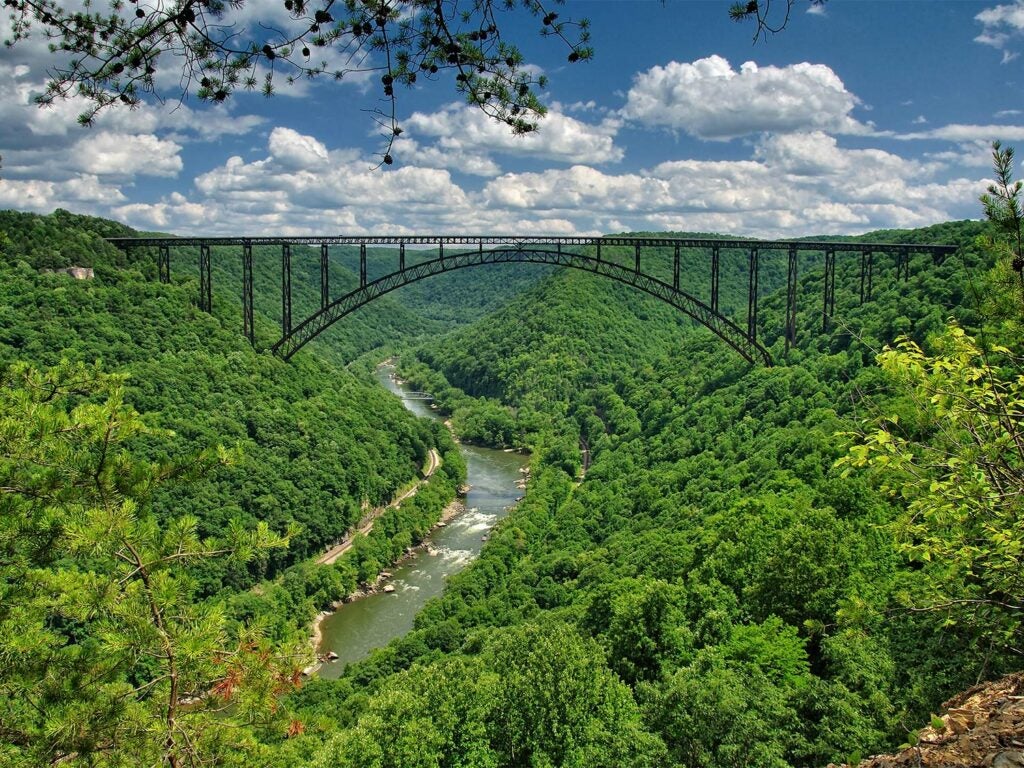 The New River Gorge Bridge is an icon of the Appalachian Mountains.

“I think the bite pattern is boulder, current, sycamore shade, railroad gravel, foam,” Chris Ellis says. Ellis is a big guy, a goateed squirrel-dogger and self-described West Virginia hillbilly. He announces his prophecy from the bow seat of the raft, just as he launches an old-school Tiny Torpedo into a foamy eddy behind a boulder where the current pushes along a shore clad in railroad gravel. It lands in the deep shade of a riverside sycamore.

When the smallmouth bass porpoises on the lure, it pushes out a hump of foam and green water that tells us it’s a good fish before it even hits, before the rod bends, before the three of us in the raft—old friends—all holler out in unison.

And for an instant I find myself wondering: What’s up with all this hollering? Ellis, our buddy Dave Arnold, and myself have yukked it up non-stop like a bunch of middle-schoolers ever since we launched the boats the day before. Maybe there’s something primordial about this landscape that prods such full-throated joy—a vernal gorge that doesn’t look all that different than it did when the coal in its green folds was still young. Or maybe there’s something familial and comfortable about big roaring water and nights by a fire, about the ecosystem that evolves in a three-man raft on a three-day river trip that makes you drop your guard and let fly.

The instant passes and Ellis’ plunging spinning rod brings me back to the present. He winches the fish to the surface, and it holds in the lee of the raft—flanks the color of crayfish, eyes so black you can’t help but imagine a shade of malice deep within. “I don’t know, boys,” Ellis says. “But I think we might be fixing to catch some fish.”

River friends are the best of friends, and I’ve hooked up with a couple of old pals for a fishing float down one of the most storied rivers in North America. The New River unspools across three states, from headwaters in the North Carolina highlands, across Virginia’s Allegheny Front, and north into West Virginia, where it careens for 53 miles through federally protected lands. In places, the river is a slow, languid float through vast unbroken forest. In the New River Gorge itself, dubbed “the Grand Canyon of the East,” the river drops in harrowing Class III, IV, and V rapids through one of the most popular rafting regions in the country. Every square inch of the New River Gorge National River’s 70,000 acres of woods and waters is public land, and just about all of it is open to fishing and camping.

Our plan was a sampler platter of the best of what the New River has to offer: smallmouth bass in the main river, trout in the tributaries, and whitewater everywhere. We’d have to deal with high water from record rains a few weeks earlier, but big flows aside, there’s a lot of good mojo on the trip. We’re on the water in the 50th anniversary season of commercial whitewater rafting on the famed New River, and Arnold was among the first wave of pioneering guides here. In the late 1970s, he and three pals started a barebones guide operation out of a 1956 grocery store trailer. The company has now grown to one of the largest adventure travel companies in the country. Ellis grew up in tiny Fayetteville, West Virginia, perched on the New River Gorge rim like a hawk. He’s guided rafting and fishing trips here since he was a kid.

What’s so perfect about this DIY trip is that we have no set float plan and no timetable of having to meet an outfitter’s schedule. We’ve lashed camping gear to the raft frames and rigged trailers to trucks so we can move up and downstream like vagabonds. “It’ll be like the old days,” Arnold said as we sketched out the trip over coffee and eggs the first morning. “We’d walk down to the river at first light and let the water tell us what we were going to do that day.”

That hasn’t changed in Arnold’s 40 years on the New River; the water dictates all. During our first day on the river, we fish a wide stretch of water that seems like three rivers in one—bony side channels on the outside of bends, frothy rapids in the middle, and grass-lined inside banks. Thankfully, it doesn’t take us long to find the fish—even in this big water.

We are nearly trading smallmouth bass one for one—Ellis is chunking a Ned rig with a finesse stickbait, and I’m sneaking a Sneaky Pete conehead popper into every pillow of pocket water I can reach. It’s a good way to wear out a shoulder joint, but it’s hard not to fire a cast at every slack hole in this popcorn water. We’ll see this pattern all day long—the raft quickens as the river nears a rapid, the broken flow rushing over limestone ledges and boulders, and suddenly the fish are there. Half the smallmouth bass smash the popper out of the water, and the others suck it under with gentle sips. When they’re on, they’re on—and they are on for as long as the water is fast and there are rocks. The river clamor is loud enough that we have to holler to be heard, and we holler with every strike.

Although, there are interludes of peace and quiet. All along we aimed to put a hurting on river smallies from the rafts, then hike up tributary streams for small-water flyfishing for trout. Despite the high flows, the creeks are too tempting not to try. At one trout stream, Dunloup Creek, more than three miles of trout water lie on public lands, and we hike up a twisty narrow road to dredge nymphs in deep pools behind old board-and-batten coal camp houses and along current seams below a railroad trestle that arcs over the river.

The New River seems to always find a way to remind me of how closely human and natural history reside here. One night I clean four smallmouth bass at the river’s edge as a thin fog settles on the water. The mountains go dark, unmarred by a single light upstream or down, and in another place, at another time, I would have savored the wild, undeveloped nature of such a scene. Instead, a train whistles and I see the pinprick of light from the locomotive far downstream. It brings to mind something I’d seen earlier along the river. We’d floated and fished for mile after mile under soaring palisades of unbroken green nothingness, when my eye caught an old coal tipple rising above the trees. Back in the day, nearly every New River creek holler had a coal mine; more than 50 little coal camps and towns lined the river. I put down my fishing rod and watched the tall tipple slip out of sight behind the green curtain, behind another mountain ridge. This place was once, and not so long ago, an industrialized corridor, chock full of boarding houses and bars, boom towns, coal mines, and coke ovens. That it now claims status as one of the East’s wildest places gives me hope that it’s never too late to plan for the wild places of tomorrow.

Good friends and sunset ruminations aside, this trip is all about the fish—and the funny thing is, after three days on the water, with epic runs of fishing, the fish that I remember best are two that I failed to catch.

The first came on Glade Creek. One afternoon, we nosed the rafts onto the creek’s cobbled delta, where a half-dozen ridges squeezed the river into a long series of pillow-top rapids. Arnold worked on camp while Ellis and I hiked up a mile of old railroad grade, around a 15-foot waterfall, and onto a boulder field where the stream braided in deep shade. It was classic drop-and-pool water and the close-quarters fishing reminded me of remote creeks in the Great Smoky Mountains. I went upstream, sneaking around the corners of mossy boulders. The creek was high and sludgy, a milkshake from the recent heavy rains and a dispiriting sight despite the stunning surroundings. I looked for side channels or back eddies that might hold cleaner water, but nothing in sight would give a trout more than a quarter-inch of visibility.

Bummed, I made a half-hearted cast upstream of a pair of boulders that hourglassed the creek. Instantly, a fish struck—a furious splashy take that caught me off-guard. My set came so late that I ripped a couple feet of dragged line over the hole. Furious at myself, I settled down, gave the trout 90 seconds to decide he might still be hungry, and fired back.

But Glade Creek had given me my chance. In an hour and a half of fishing, I couldn’t scare up another rise.

The second whipping was back on the big water. On a typical New River late summer day, throngs of damselflies skitter over weedy shorelines. Slower in flight than dragonflies, the blue damsels are a favorite target of big smallies. High water had dampened the hatch, but sunny weedlines were still producing splashy rises.

With Arnold on the oars, we had lined up to run a wide ledge drop when I spotted a fish rise on a damselfly hawking low over the water. Arnold rowed me within range, and when the fish made a second strike I cast almost on reflex, plopping the chartreuse popper into the dissipating rise ring. The fish struck instantly, before I could tug the slack out of the line, and I barely turned the empty strip-strike into a sloppy backcast, then powered the rod forward with bent knees to keep the fly from smacking the back of my head. This time the fish gave me plenty of time to set the hook, but still I missed the strike.

“Eat the freaking fly!” I yelled.

I ripped the line overhead for a third try at bat, but by then the raft had moved downstream, and cast number three to a sure-thing bass collapsed in a heap halfway between fish and boat.

I sat down in the bow seat to brace myself for the rapid. “Lot of hollering on this trip,” Arnold said. I’d had a solid run of 15 fish in the last hour, and the afternoon light was leaning hard up the gorge, with the river cackling over the rocks and the raft freighted with tents and stoves and coolers and an old friend on the oars. I leaned back and laughed, as happy as I’d ever been to be beaten by a fish.