I told Michelle that I totally got that my trip with Emma to Sanibel Island for Christmas break was about Emma,... 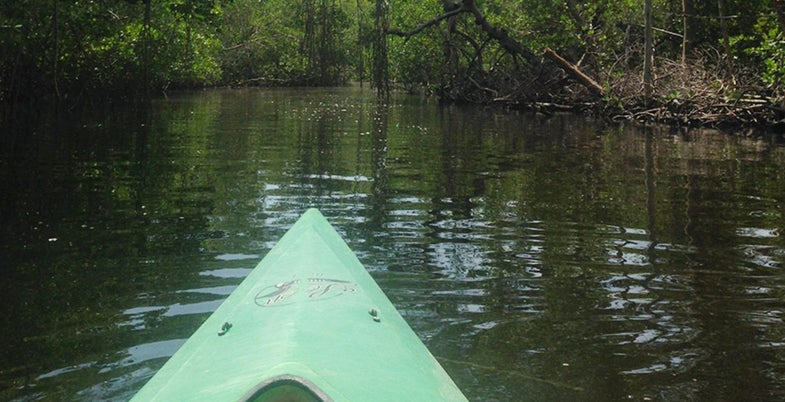 I told Michelle that I totally got that my trip with Emma to Sanibel Island for Christmas break was about Emma, not about fishing. Then I slipped two travel rods into my bag. Turns out every parent with a school-age children in America takes them to Florida this week (though not with the same hidden agenda). Long story short, we’re in a cell in a hermetically sealed motel 90 minutes from Sanibel. It costs $6 just to get on the causeway that takes you there. The traffic moves at 4 mph when it moves at all. Fist fights break out in the tiny “public” parking areas at parks and beaches, where—if you are lucky enough to get a spot—you pay $4 an hour. There aren’t many park rangers, but parking enforcement is ubiquitous, brisk, and efficient.

We did go on a thoroughly enjoyable 90-minute kayak tour in Tarpon Bay yesterday, which Canoe & Kayak magazine rates as one of the top 10 paddling destinations in the country. As we drifted through tunnel-like passes among the mangroves, we saw eagles, ospreys, ibises, egrets, herons, and a 5-foot gator. It was gorgeous. Worse, there were fish breaking all over the place. Our guide said there were more kinds of fish around than he could keep track of, including snapper, sheepshead, mullet, and seatrout. The nice thing about Tarpon Bay Explorers is that they let you keep the boat—as long as you stay in it—for the rest of the day. Upon our return, I tipped the guide, bought a dozen shrimp, and even rented a bait bucket ($2). I bribed Emma with the promise of Starbucks, which she loves inordinately, if she stayed put with her Kindle and iPod for an hour. My hopes soared when the guy who sold me the shrimp gave me 20 instead of 12. “You just go through them so fast out here,” he said.

It was dead high tide, the worst time to fish. But I’d come a thousand miles, spent thousands of dollars, and knew I might not get another shot. I paddled out 400 yards to where a sandbar gave way to seagrass, anchored, baited up, and cast. Within five seconds, I had a hit and reeled in a bare hook. Well, the guy had told me to expect this. And there were definitely fish here. I looked at it this way:

• I only had to get lucky once.

• It was just a matter of time.

All of this was true. It’s just that it was true in a way I hadn’t expected. By which I mean that I never got another hit. I’d cast, wait for any sign of interest, and finally reel in a hook heavy with seagrass. When I untangled it, I’d find my unmolested shrimp flapping apathetically at the end of the silver hook. It got worse. A guy behind me in a canoe was unrolling long, stylish casts with his fly rod and nailing fish left and right. Not huge ones, but feisty. I’d bait up with a fresh shrimp and cast somewhere else. Didn’t matter. The fish were boycotting me. I could have thrown cinder blocks in Death Valley and gotten more hits.

I stayed out for an hour and half. There comes a moment when, despite your best efforts to convince yourself otherwise, you can no longer avoid the truth. I released the groggy shrimp left in the bait bucket, wished them well, and began the paddle back in. I’d been nursing dreams of walking into a restaurant, tanned and salty and holding a big snapper, which I’d have grilled for dinner. The envious looks on other men’s faces, the big bag of leftover fish to take back to the motel. Instead, I took Emma for a Venti Caramel Frappuccino. Then we stopped for pizza. I bought a six pack of beer. We headed back to the motel to watch TV.

We still have three days left. Anything could happen. At least that’s what I’m telling myself.