Get in on some light-tackle action—away from the crowds 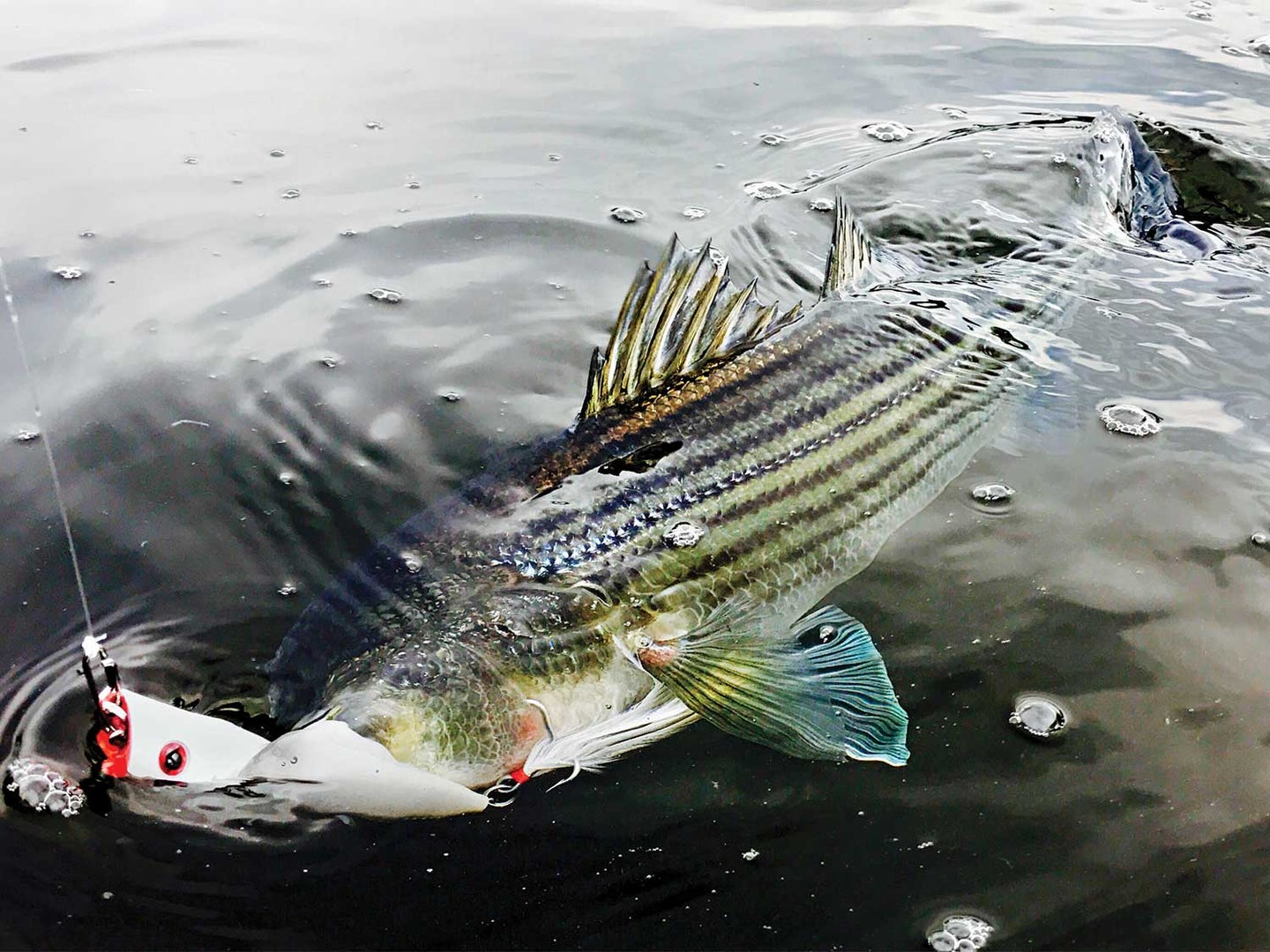 We’re in a labyrinth of sod banks. The water has a purple sheen in the dawn light and it’s mirror-flat. In every direction, another creek arm snakes away into the vast expanse of green marsh grass. As my friend Capt. Eric Kerber nudges us forward with the trolling motor toward a point with mullet flipping off the end, we spook a few fish. Three mud plumes erupt on the shallow bottom in front of us. Along the bank, a bulging push of water zooms away. If you didn’t know this was New Jersey, you’d swear those were redfish and this was South Carolina, yet less than a mile west of our position behind the seaside city of Wildwood lies the Garden State Parkway in rare form—free of traffic because it’s only 5:30 a.m. and because Labor Day has passed.

We get in range, and Kerber fires a Spook to the point. I cast a black foam popper to the opposite bank with my fly rod. The double hookup is almost instant. Kerber’s striper measures 24 inches; mine tapes at 23. For late-summer bass, they’re both a good size. We release them as quickly as possible so we can cast again. It’s a race to connect, because despite the amount of life we’re seeing, we know the second the sun paints this skinny water, the bite will drop dead. We’ve been out since 4 a.m., and by 7 a.m. we’ll be at the diner, but if you want in on light-tackle action with “resident” stripers, keeping odd hours for a short window is part of the program.

Where and When to Catch Resident Stripers

Striped bass are migratory. By the book, August and September finds the bulk of the big oceanic fish between southern Maine and the tip of Long Island. By the same book, these fish will end up wintering off Virginia or in Chesapeake Bay. What many don’t realize is that along every piece of coast that the migration touches, there are bass that don’t follow the herd. In many cases, these are fish that hold over in bays, rivers, and estuaries until they’re ready to join the migration, and in others, they are true residents that never leave inlets and backwaters. These are schoolie bass. A 30-​­incher would be a giant in most locations, but when you live outside the summer range of the big fish, these scrappy youngsters will bend a rod harder than more-common hot-­season players like flounder and croakers. The thing is, the odds of catching one at high noon during your August vacation are slim.

Unlike ocean-roving stripers, little residents tend to be skittish. They live around the same bridges and within the same channels that are ripped over by thousands of Jet Skis, speed boats, party boats, and wakeboarders from Memorial Day to ­Labor Day. During high-boat-traffic times, or when hundreds of people are splashing around at the beaches of bays, these fish lie low. Sunset is the trigger, prompting them to loosen up and feed when the water has quieted.

Fishing after dark or in the early-morning hours is only one side of the equation, however. You also need the right tide to coincide with those magic hours. Similar to trout, backwater stripers like to post in areas where the current carries food right to them. They may hold behind a dock piling or a point, shooting out to smack a peanut bunker or glass minnow being carried by the tide. Unlike a trout river, of course, tidal flow doesn’t remain constant. Success revolves around finding that perfect time when the bass are feeding hard and it’s easy for you to make a natural presentation. This often occurs around the top of an outgoing tide. Once the water drops and the current slows, feeding activity will wane, and the bass that are still chewing can get snobby and selective. They’ll have more time to scrutinize your lures and flies rather than having to make a snap decision to attack.

Resident stripers will set up to feed around anything, from marinas to creek mouths to flats, but there is no place I get more excited to target them than in bridge lights. The biggest challenge with doing this is simply finding a lighted bridge you can access on foot or by boat, but if you do, the shadow lines created in the water are magnets for schooling stripers. Forage such as grass shrimp, juvenile crabs, and marine worms are attracted to the glow, and assuming there is good tidal flow below the bridge, these morsels are bonus bites among the buffet of baitfish likely already being pulled under the bridge. Small soft-plastic ­finesse baits and bucktails score here, as do smaller topwaters and plugs, but considering the size of the targets and their scaled-down forage, resident stripers are a flyfisherman’s dream.

I vacation at the Jersey Shore with my family every Labor Day week, and having two small kids means I don’t get much opportunity to fish during the day. My time comes when they’ve gone to bed and I know an outgoing tide will get resident bass blitzing in the lights of a few local bridges. It’s simple fishing; I carry a 9-weight, a popper or two, a few Clousers, and some floating crabs, which, on occasion, I’ve watched bass rise to and sip like rainbows eating caddis. The fun lasts for an hour or so, and then it’s home to bed, but that’s often all you get from these little players. I’m happy to catch them a few times per season, and then before I know it, my in-laws’ beach house is winterized, the temperature drops, and I’m donning thermal base layers, bibs, and a jacket once again, breaking rough inlets at dawn because the migrators are back in town.

Rod Vaults from Denver Outfitters are a common sight on the trucks of fly anglers across the country. Now the company is bringing this convenient method of rod transport to gear anglers with the Rod Vault ST. Capable of carrying three or more fully rigged conventional or spinning outfits measuring up to 8 feet long, the Vault is made from tough aircraft-grade aluminum and locks to keep your gear from getting snatched. It also adjusts easily for mounting on any vehicle with rooftop cross bars.