The duo won $10,000 by jigging with reel-less fly rods from a johnboat 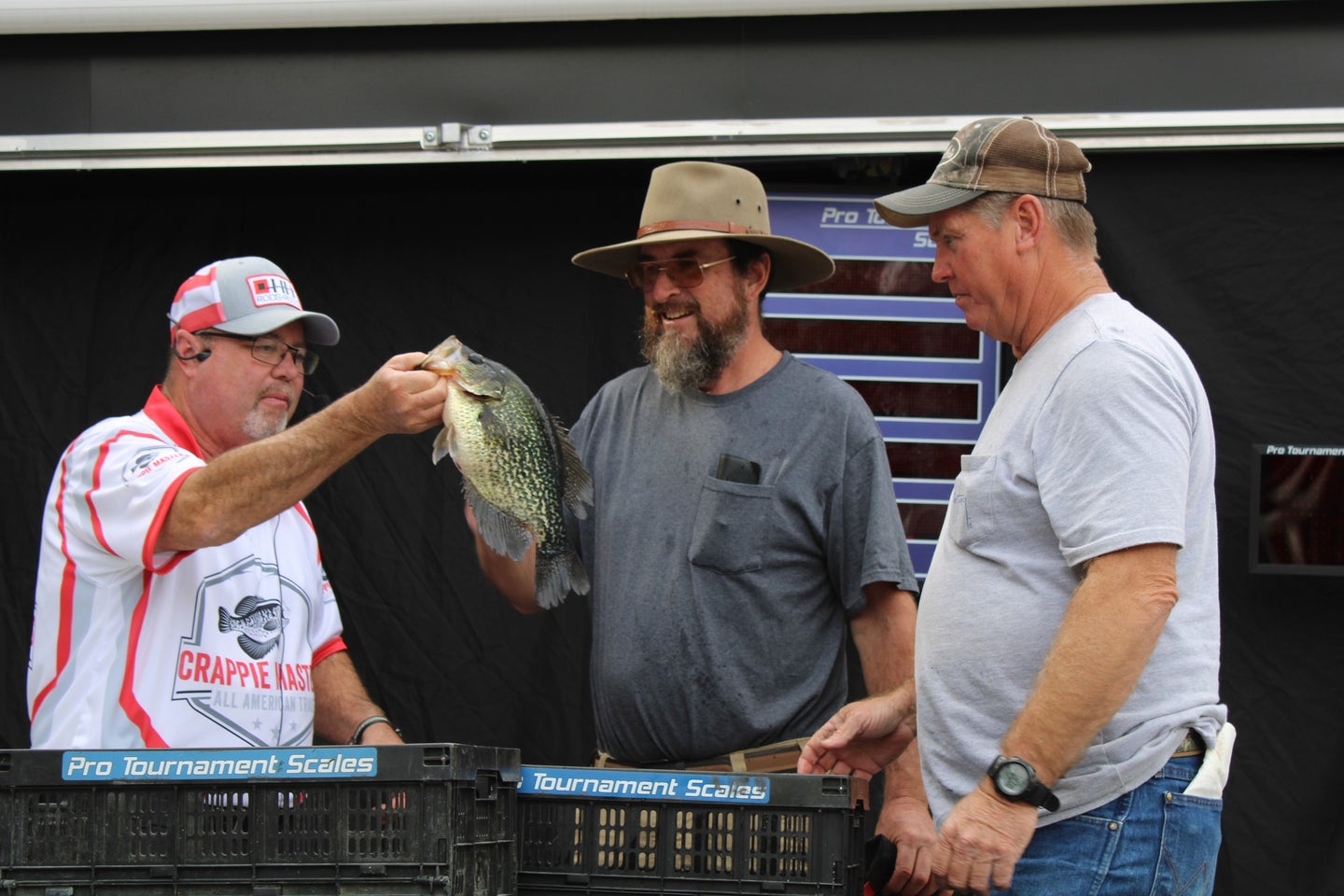 A pair of local anglers beat 45 other fishing teams and took home first-place honors and a $10,000 check at Crappie Master’s 2022 kickoff tournament January 21-22 on the St. John’s River in Florida. In a professional angling world that thrives on gear and equipment sponsorships, the winning team of Randy Stormant and Bobby Robinson stands out. They fished from a nondescript, 13-foot johnboat with no electronics and used fly rods without reels.

Stormant, of Deland, Florida, and Robinson, of nearby Pierson, have fished together for years. Their only other tournament experience, according to Crappie Masters LLC Owner Blake Jackson, is two local club events—both of which they won. The men took the first day lead, catching a seven-fish limit weighing 13.83 pounds, less than a pound ahead of seven other teams.

Competitors fished in shirtsleeves on the first day, but an overnight cold front brought a blast of frigid air and precipitation on day two. Anglers bundled up and many pros figured fish might move to deeper water. Stormant and Robinson, though, continued to fish shallow, swimming their crappie jigs around brush and lily pads in bends on the main river. “When crappies are getting ready to spawn, they stay in close,” Robinson told F&S, adding the water temperatures were between 56 and 58 degrees, a temperature range that he said fires up pre-spawn fishing. It paid off, yielding a second-day 15.11-pound bag, cementing the win with a total of 28.94 pounds of crappie.

Brian Sowers, the Crappie Masters tournament director and the tournament’s weigh-in emcee, asked the men how they succeeded—especially with their limited gear. Prior to the tournament, organizers predicted success would likely come from anglers using spider-rigging techniques or long-line trolling. “There isn’t a reel in the boat,” Stormant said, “all jig poles. We just jigged the cover all day long. This is the only kind of fishing we do.”

Asked about the jigs he and Stormant used used, Robinson said: “They’re Slater’s jigs. Right now, you need to be fishing with something with a little bit of chartreuse in it—get the fish’s attention. As for rods with reels, it sounds like they don’t plan on changing tactics anytime soon. “I don’t need a reel,” Robinson said. “They wouldn’t fit on my poles.”

Stormant added: “The rods don’t even have eyes (guides), just a tip eye.”

Ten seems to be a magic number, according to Jackson. The anglers used custom, 10-foot, 10-weight fly rods, with 10 feet of 10-pound monofilament line tied to the eye at the rod’s tip. “Then they have their jig and a cork,” Jackson said. “It’s just like a cane pole set-up, but in graphite.”

Robinson’s late father was a serious angler on the St. John’s River. Stormant gave an emotional shoutout to him at the weigh-in, saying he’s the man who taught them how to fish. “A lot of years ago, we put his daddy’s ashes in the river here,” Stormant said, adding that he called on his dad to deliver some positive karma as the second day progressed. The event was winding down and even though they had caught some 60 fish during the day, they sensed they needed a couple big ones to give them a chance at winning. “So, I started bitching at his daddy,” Stormant joked. The prayer paid off. At 2:30 p.m., they boated a 2.2-pound fish. Two minutes later, another one, about the same size, went into the livewell.

“And then I quit bitching,” Stormant said.

The team chalked up their win to persistence. Stormant said he lost some fish that were bigger than the ones that made it into the bag. “I was a little sore about that,” he said. “We didn’t ever quit.”

Jackson, who monitored day two action from a camera boat said he was amazed at the skill with which the men finessed fish to the landing net. “Not having a reel with some drag really makes it challenging,” Jackson said, comparing the spunkiness of St John’s River black crappies to smallmouth bass. “They only lost one or two fish. It was definitely impressive.”

“It’s all in the technique,” Robinson said. “They put up more of a fight that way. The rods are really flexible, they help play the fish out.”

Jackson calls it a storybook finish. “It was the definition of two old buddies who go out and take on the professional side and get a wire-to-wire win with a giant bag,” Jackson said.