Summer weather can make muskies wary. So how to do catch these monsters now? Put your time in and show them the right lure 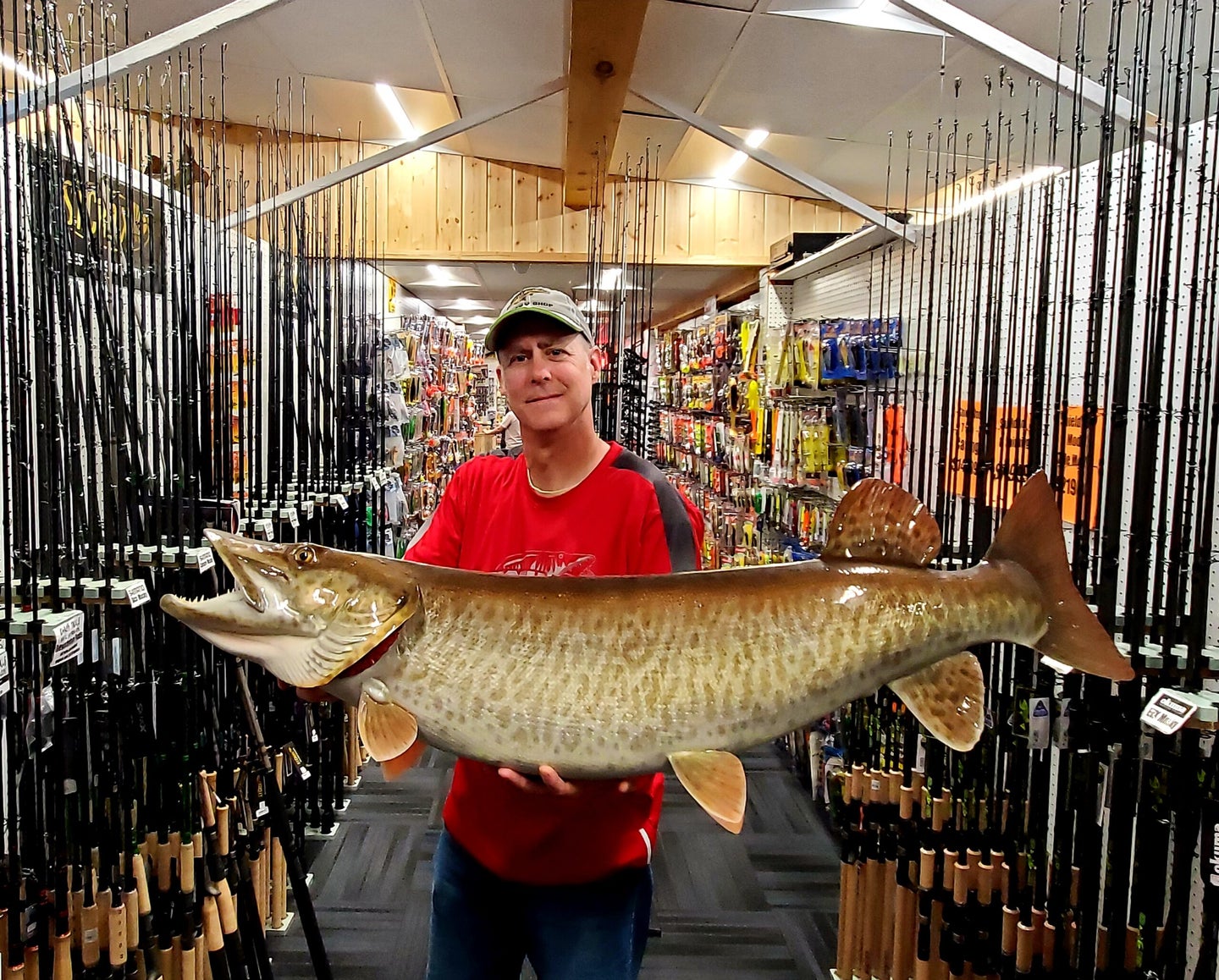 Jay Esse, manager at the Musky Shop in Minocqua, Wisconsin, holds a replica of a huge muskie landed during summer. Jay Esse
SHARE

The midsummer muskie bite can frustrate some anglers. “Fish are spread out in most bodies of water; plus, there’s more sun and clear water, and there’s increased boat and other activity in summer than any time of year,” says Jay Esse, manager at the Musky Shop in Minocqua, Wisconsin. “All those factors can reduce the number of catches for fishermen.”

But that doesn’t mean you can’t catch a monster right now. The keys, says Esse, who is co-host of the Musky360 podcast, are to first recognize prime conditions and habitat, and then mount an attack with the best lures possible. “Fishing the first and last hours of daylight can make a huge difference in summer,” he says. “And being on the water ahead of, or right behind, a front is important too. But catching muskies really comes down to effort. I can tell you that day in and day out an overcast day makes for a better musky bite, and that’s true. And yet it’s also true that the biggest fish are often caught on bright sunny days when nothing else is biting.”

So yeah, you just need to be out there fishing a lot, armed with he hottest summer lures. Here are Esse’s top-five baits for fooling summer muskies, all of which are available at the Musky Shop, the world’s largest bait and tackle shop devoted musky fishing.

Slammer is a Wisconsin-based company that makes muskie baits up to a foot long, but Esse recommends the 7-inch model for summer fish. “It’s a great all-purpose, shallow-diving bait that works great around weeds and other structure,” he says. “In addition to being affordable, it’s a bait I like to use when fish aren’t super aggressive and are passing up top-water stuff or bucktails. The key with this lure is to make frequent pauses, then twitch it before continuing the retrieve. That pause is the triggering mechanism that will get a reluctant or following fish to strike.”

The Head Hunter is a hybrid lure—a swimbait with a crankbait lip that also works well as a troller. And, as muskie lures go, and it’s another relatively inexpensive bait. Esse calls this one the Swiss Army Knife of muskie baits and says that Livingston’s EBS (“Electronic Baitfish Sounds”) micro-chip embedded in the lure can help provoke strikes. “I like to use a much slower retrieve with this lure during the summer,” he says. “Because it’s double-segmented, plenty of pauses and short pulls give this bait a great side-to-side action.”

With a 6-inch, durable, molded-plastic body and a soft, replaceable tail loaded with action, the Phantom makes Esse’s list of must-have summer jerkbaits. “The Phantom is a great all-purpose bait that comes in so many great colors,” he says. “When the water is clear, I like to go with natural baitfish tones like sucker, walleye, or perch. With darker water, or just because sometimes crazy colors work when nothing else does, go with something hotter like Custom Clown or Prairie Sunset.”

Featuring a pair of offset Colorado spinner blades, the Firebomb illustrates one of the hotter trends in modern muskie fishing. “Big bucktails have become go-to baits for a lot of muskie fishermen. The staggered blades, available in differing sizes on some models, create a vibration that can really trigger a strike,” Esse says. “And the Spanky line features a ton of color choices. I like to throw them when there’s a front coming in that I know will influence fish activity. This is just a great all-around bait to use when fish are on the move.”

Every musky hunter should have a quality topwater bait in his box, so why not go with one of the industry’s most time-tested models? “The Topraider has been around for over 20 years, but continues to be a favorite,” Esse says. “The bait literally started the topwater musky craze and has never gone out of favor with fish or fishermen. The bait has great topwater noise and movement, and it’s designed so it will never go out of tune. It’s the perfect choice when muskies are active and aggressively feeding.” The bottom treble hook can also be removed when targeting muskies in weedbeds.