The unexpected incident took place off the coast of Alabama. Unfortunately, the stress-birthed pups did not survive 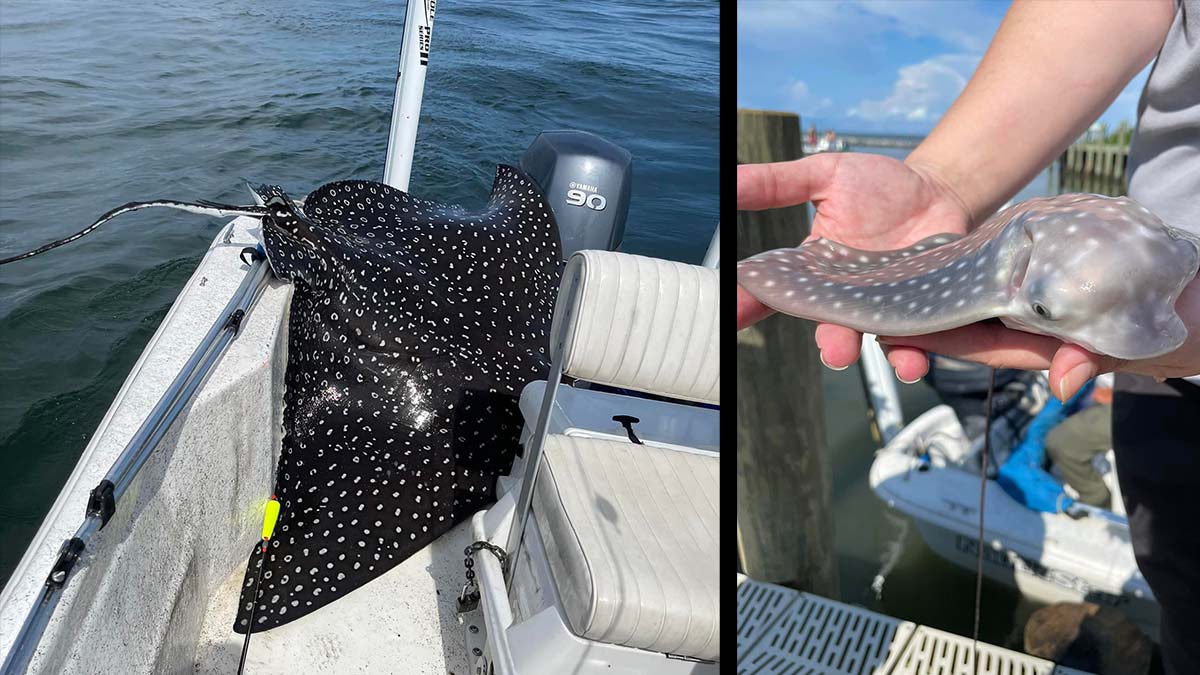 An Alabama woman was fishing in a tournament when something truly unexpected happened—a large, pregnant eagle ray jumped into her boat. “We were both in the wrong place at the wrong time,” angler April Jones told AL.com “I thought we hit a wave. Water came in. I felt like something hit me. I didn’t know what it was. I just saw a blob.”

Well, the blob was a 5-foot, 400-plus-pound spotted eagle ray that was pregnant with four pups. It jumped into the back of Jones’ boat while Jones was fishing in the 2022 Alabama Deep Sea Fishing Rodeo in the Gulf of Mexico. The ray may have been trying to escape from a predator when it launched out of the water and into the boat. Jones’s husband was driving the boat when the incident took place. While the ray was aboard, it stress-birthed four pups, which did not survive.

The couple, in addition to their 8-year-old son and Jones’s husband’s grandfather, couldn’t lift the ray out of the vessel. They motored to a boat ramp with the ray on board, took some photos of the big fish, and recruited a couple of others to help them return the animal to the water.

“The nature of large rays like this is to sometimes go airborne,” Brian Jones, Dauphin Island Sea Lab Estuarium senior aquarist, told AL.com.The aquarist arrived at the port shortly after the Jones family arrived with its unexcepted cargo. The female ray was already back in the water, but Brian Jones collected the four dead pups for research. Rays normally hatch young internally and then carry them until they’re developed enough for birth and separation from the mother. It wasn’t clear how close the pups were to be ready to be birthed.

According to WKRG, April Jones went to the E.R. for a sprained shoulder she suffered during the incident. Despite her injury, she fished the Alabama Deep Sea Fishing Rodeo the next day and managed to catch a qualifying black drum while fishing from a pier.

“We did the best we could to keep the mama alive until we could get help,” Jones explained on Facebook. “We are devastated the babies did not survive, but there was nothing we could have done.”