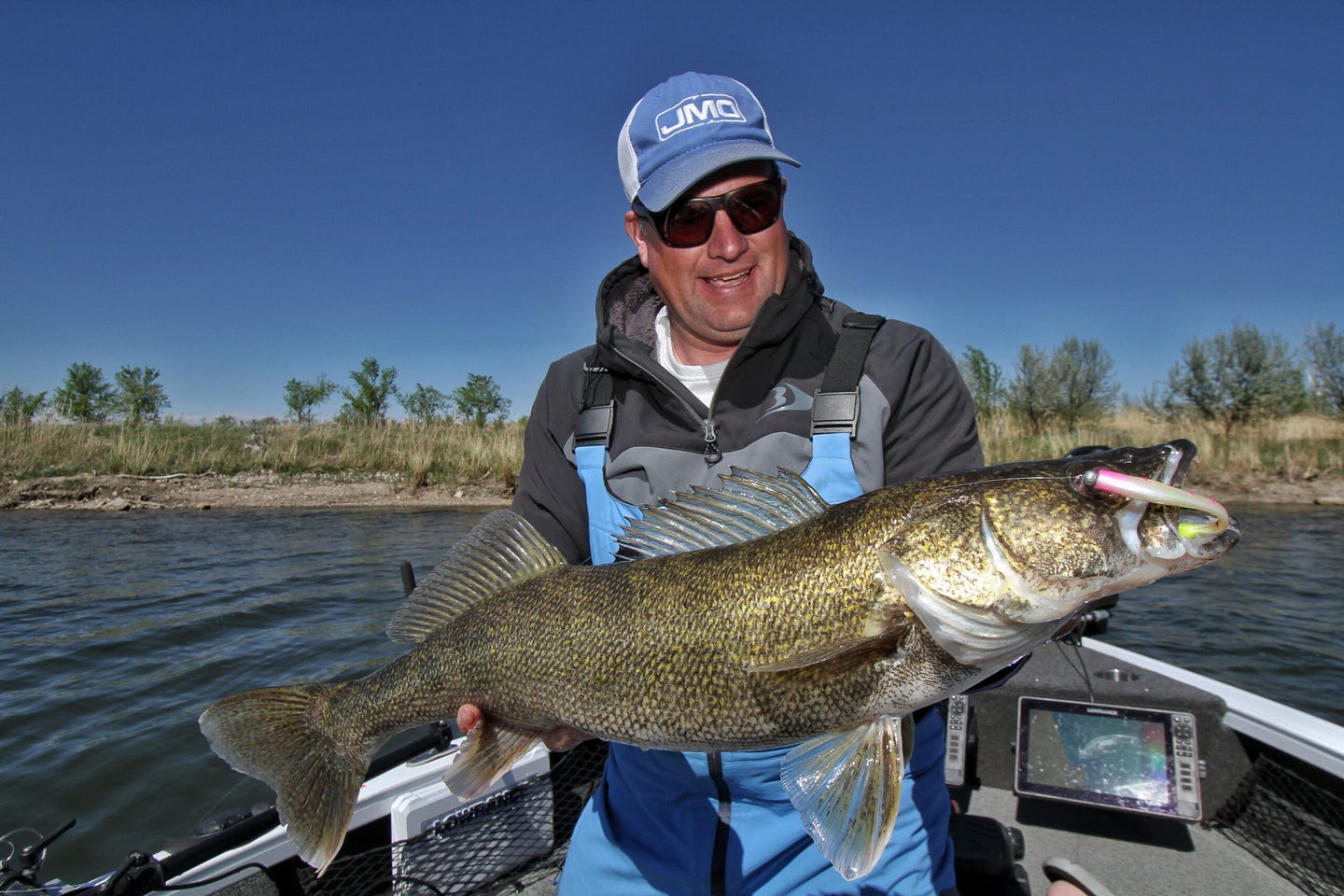 The guidelines for walleye fishing used to be so simple: Fish rivers in spring, rocky breaklines and transition areas during the post-spawn, and then deep breaks or basins during summer.

But then some savvy anglers discovered an inconvenient truth: Walleyes use weeds—a lot. And many lush, green environments that seem better suited for bass fishing can produce excellent season-long marble-eye action.

More and more anglers are now aware of this fact and yearn to hit the weeds for big walleyes—and that’s where the inconvenient part comes in: Most of them don’t really know how to go about it. Tournament angler Tim Winchester and nationally known walleye expert Jason Mitchell of Jason Mitchell Outdoors Television say that the process begins with a bit of knowledge and some seemingly un-walleye-like approaches. Here’s how they pull trophy ’eyes from the weeds.

Where and When to Catch Walleyes in the Weeds

Mitchell targets weed-loving walleyes in many types of waters, including reservoirs, natural lakes, shallow prairie lakes, Canadian shield lakes, and even bays of the Great Lakes. He says the best weed fishing typically begins during the post-spawn period and, depending on the water, can continue all the way through autumn.

“I think weeds are a good possibility to check all summer,” he says. “On a lot of big lakes especially, everybody has a chip, and everybody can see the obvious deeper structure. Those spots are still good, but in today’s world, they get a lot of attention. In less than 12 feet of water, where there are weeds, the structure is much more subtle. You have to get your hands dirty a little bit to figure it out, and a lot of that stuff doesn’t get touched. In many lakes, those fish have just been left alone for most of the summer.”

Winchester, who is based in Oshkosh, Wisconsin, chases weed walleyes on the shallow, sprawling Winnebago System and lakes in northern Wisconsin. He said weed fishing typically gets good when water temperatures hit the upper 50s or 60s and weed growth accelerates. And he’s learned to identify very specific situations that produce fish.

“Not all weeds are created equal,” he says. “When it gets too warm, some weeds develop a moss on the top of them, and the walleyes tend to avoid those in the shallows. Cabbage is my favorite weed to fish. If we can find a rock transition or a rock pile in that deeper cabbage, that’s like money. I don’t really go into the Eurasian milfoil in the shallows. I have caught them in shallower water, but 4 to 6 feet of water is where I’m usually looking.”

Mitchell finds walleyes in several types of weeds, including cabbage, coontail, pondweed, and even the edges of pencil reeds. “As long as it’s green with good water circulation around it, it can hold fish,” he said. “And depth is important. Look for little breaks breaks where it drops down to 6 feet or more or small flats that drops 2, 3, or 4 feet deeper. Combine that with a weed edge or openings in weeds, and those spots will load up with fish. They like to patrol the edges of the reeds—the top edge or off to the sides.”

Winchester agrees, adding that he often enjoys better success fishing the weeds when wind dirties the water a bit or creates current. “I’ve caught them on flat, calm days, but a little wind will actually position those fish on some very predictable spots,” he says. “The point of a weed bed sticking out or the inside turn of a weed bed—those are areas that fish will set up on. A lot of times, they’re just kind of waiting and being opportunistic for food to come to them.”

The Best Baits and Tactics for Catching Walleyes in the Weeds

Weed walleyes behave somewhat differently than their brethren in river pools or deep drop-offs. And Mitchell says that works to the advantage of anglers. “Often, the fish in the weeds are more aggressive,” he says. “I think it’s just a product of their environment. They’ve got a small window of opportunity; when potential food comes by, they need to eat or it’s going to get away.”

Mitchell catches ’eyes in the weeds by slip-bobbering, casting soft plastics, trolling or casting shallow-running crankbaits, and trolling spinners or small harnesses with just enough weight so they stay just above the weeds.

But his favorite presentation is slowly working a paddle-tail-style swimbait over the tops of weeds, and then ripping the bait free when it hangs up on vegetation, which often provokes strikes. “It’s a fun way to catch walleyes,” he says. Typically, he uses ¼-ounce jigs and 4-inch tails, but he’ll sometimes go larger or smaller, depending on the situation.

Winchester takes a similar approach. When trying to locate fish, he drifts across weed-covered areas and uses a rip-jigging technique with a ¼-ounce jig and a 3.5- to 4-inch plastic body.

“You’ll feel it hang up, and as soon as you rip it free, those fish are on it,” he says. “It’s like a triggering mechanism. Typically, when they’re buried in those weeds, they are active and want to eat. A lot of times, they school up pretty tight, so you can rip the jig through them and locate that school. Any time I catch a fish, I hit the spot-lock function on my trolling motor, because I know I’m going to circle that area.” During a recent two-day tournament, he caught all his keeper fish from a 30-inch circle in a weed bed. If the action slows, he’ll drift again until he locates another pod of fish.

Winchester says he’ll also cast crankbaits, such as a No. 7 Berkley Flicker Shad, which features a loud rattle that attracts fish. Or, he’ll go old-school and cast spoons, such as a Little Cleo. And if he knows precisely where fish are located, he might pick through them with a jig and crawler.

For fishing the weeds, he uses yellow PowerPro braided line with a 4-foot section of 15-pound fluorocarbon. “If they bury in those weeds, you need some heavy line to get them out,” he says. “It’s not finesse fishing. You’re muscling them out of there at times.”

For jigging and fishing swimbaits, Mitchell uses 10-pound FireLine with a 15-pound fluorocarbon leader, in case he hooks a pike or other toothy critter. When pulling spinners, especially in waters with lots of zebra mussels, he might use rigs spooled with fluorocarbon or monofilament.

Either way, both anglers known that they can get away from the packs of boats hovering over rocky reefs and open-water flats, and dive into the weeds to catch big fish. You can too. The walleyes are waiting, and you might have all the fun to yourself.